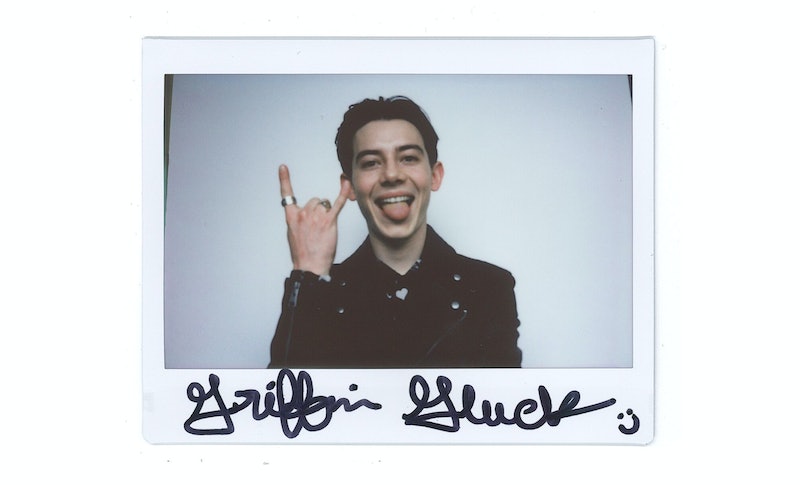 When celebrities hang out with Bustle editors, we want to give them the chance to leave their mark. Literally. So we hand them a pen, a piece of paper, a few questions, and ask them to get creative. This time, Big Time Adolescence star Griffin Gluck is leaving his mark in the Bustle Booth.

If you watch Netflix, chances are you’ve seen Griffin Gluck. The 19-year-old Los Angeles native has carved out a niche for himself on the streaming platform playing high school-aged nice guys in shows like American Vandal and Locke & Key and in the rom-com Tall Girl. But these days, Gluck is ready to break bad.

As the impressionable teen Mo in Big Time Adolescence (in theaters now and available on Hulu), Gluck befriends Zeke (Pete Davidson), a college dropout who gives him drugs and haphazard life advice in equal measure.

Gluck and the 26-year-old comedian's charming mentor-meets-best-friend dynamic onscreen soon bled into their real lives. The two lived on the same hotel floor while shooting the film, bought an old-school Wii together to play between scenes, and even road tripped from New York to Ohio to watch their friend and Big Time co-star Machine Gun Kelly play a music festival.

“[Our director] jokes that the Big Time Adolescence script is slowly coming to life,” Gluck says as he gears up to tell me about a recent Mo-like rebellious episode. “I was on my way to Minneapolis to watch Pete tape his comedy special and I ran into Snuffy, his tattoo artist,” Gluck says. At the airport gate he discovered Snuffy had brought his tattoo guns in his carry on, and was itching to join a new kind of mile high club. “[We were sitting in] economy. I've got a complete stranger to my left and Snuffy's on my right. He plugs the tat gun into the outlet between the seats. He was like, 'Can I write ‘LOL’ on your arm?' ‘I was like… 'No. Just a small smiley face.'” The resulting tattoo looks just like the one in Gluck’s signature in his Bustle Booth.

Spontaneous tattooing aside, Gluck promises that Davidson is a positive influence on him. “[He gives me] good advice. I told him I wanted to get a bunch of tattoos and he was like, ‘You're a pretty boy. You're not gonna look good with a lot of tattoos. I'm not gonna let you get any.'” If only Gluck would have listened.

Get to know more about the self-proclaimed “big cheese” in the questionnaire below.

More like this
'That '90s Show' Star Callie Haverda Got Advice From Mila Kunis & Ashton Kutcher
By Brad Witter
Here’s Everything Coming To & Leaving Netflix In February
By Jake Viswanath
Yes, You Can Stream ‘To Leslie’ In The UK Now
By Sam Ramsden
11 Movies To Watch At The 2023 Sundance Film Festival
By Chloe Foussianes
Get Even More From Bustle — Sign Up For The Newsletter
From hair trends to relationship advice, our daily newsletter has everything you need to sound like a person who’s on TikTok, even if you aren’t.