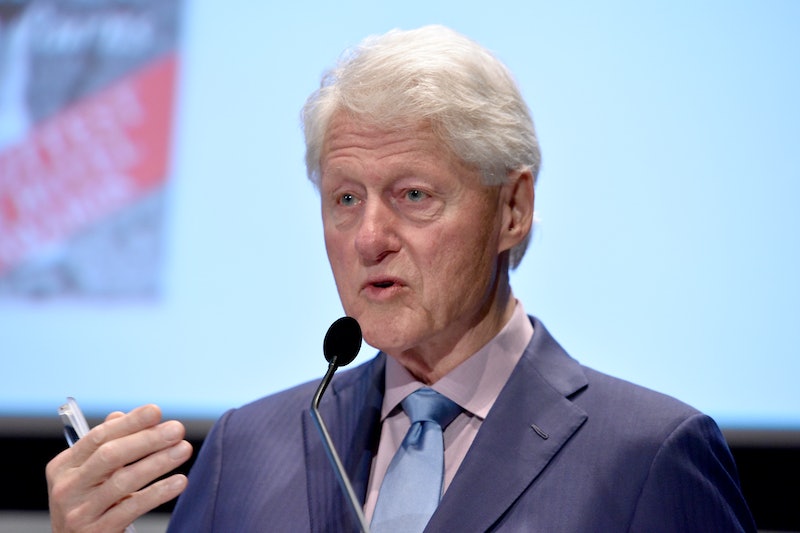 Former President Bill Clinton responded to the "hubbub" regarding a widely criticized interview that aired on NBC Monday morning. The president had told Today's Craig Melvin, that he never spoke to Monica Lewinsky again after the affair and impeachment and thus had never apologized privately. On Monday, at the beginning of a book tour event in New York, Clinton responded to the Lewinsky interview and repeated his defense. Clinton also doubled down on his support for #MeToo.

At the event, where he was publicizing the book he wrote with James Patterson, The President Is Missing, Clinton participated in a Q&A with author Walter Mosley. Asked about the interview, Clinton explained why he was flustered. "The truth is, the hubbub was I got hot under the collar because of the way the questions were asked," Clinton said. "And I think what was lost were the two points that I made that are important to me."

Clinton continued to say that he did apologize. "The suggestion was that I never apologized for what caused all the trouble for me 20 years ago," Clinton said. He told Mosley why he didn't think that was fair:

First point is, I did. I meant it then, I meant it now. I apologized to my family, to Monica Lewinsky and her family, and to the American people before a panel of ministers in the White House, which was widely reported. So I did that. I meant it then and I mean it today. I live with it all the time.

Clinton then added his other main thought about #MeToo. "The second is that I support the Me Too movement, I think it is long overdue, and I have always tried to support it in the decisions and policies that I advanced. Beyond that, I think it would be good if we could go on with the discussion."

Clinton didn't contradict what he had said in the interview that aired Monday, he just said it more succinctly and less defensively. The most controversial part of Clinton's interview with NBC was when he was asked whether he thought he owed Lewinsky an apology. Clinton told Melvin:

No, I do not — I have never talked to her. But I did say publicly on more than one occasion that I was sorry. That's very different. The apology was public.

At this point in the interview, he had already mentioned that he apologized publicly. He said several times that was sufficient.

Some of the more heated and defensive comments accused NBC of unfairly presenting the situation. Clinton also presented it as a settled topic. "I dealt with it 20 years ago plus, and two-thirds of the American people sided with me," Clinton said. The former president also said that he had faced consequences as a result of the scandal, particularly that he was millions of dollars in debt when he left the White House.

Clinton also addressed #MeToo in the NBC interview. He said that he didn't feel differently about the situation in the wake of #MeToo movement because he already "felt terrible then." Clinton also said he had empowered women throughout his political career.

Lewinsky penned an op-ed in Vanity Fair in March. She took responsibility for her role in the affair, but she also wrote:

He was my boss. He was the most powerful man on the planet. He was 27 years my senior, with enough life experience to know better. He was, at the time, at the pinnacle of his career, while I was in my first job out of college.

Last November Sen. Kirsten Gillibrand suggested that Clinton should have stepped down in the wake of the Lewinsky affair. Clinton — though sorry — does not agree.