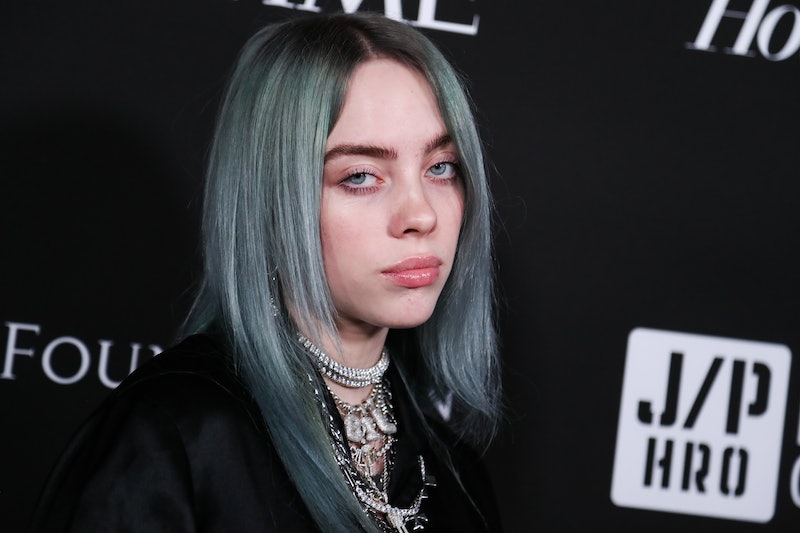 Some celebrities love changing up their hair color. Just look at how often the Kardashian women do it. One rising star, however, wants to change her hair not because she loves a change but because she hates her hair. According to an interview with Buzzfeed, Billie Eilish hates her blue hair.

Eilish sat down with Buzzfeed and some super cute, adoptable puppies to talk about all things in Eilish's career, but one of the most interesting parts happens to be about her now signature blue hair. The interview begins with Buzzfeed asking Eilish what her reason was for dying her hair different shades of blue. Oops, she actually totally hates the color altogether, not just in her hair.

In the interview, Eilish explains that blue is actually her least favorite color, and she's not really even sure how she ended up dying it. "I just lived with it for a while," she explained to Buzzfeed, "and then I was like I realized that I was like somebody with colored hair. I didn't clock that. I had blue hair, but I didn't think I was someone with blue hair. I just thought I had blue hair, and I was me. Then I realized when people walk by me they were probably like, 'Oh, she has blue hair,' you know, as you do when you see someone with colored hair."

While Eilish may have made the realization that she does, in fact, have blue hair, the issue is that it's not actually going anywhere. It's not because she refuses to dye. She goes on to tell Buzzfeed that the person who dyed it last October used a permanent dye on her locks making it nearly impossible to remove the blue. In fact, she says she spent hours upon hours in a salon chair trying to remove the color, but it's just a no go.

If there is a light at the end of this blue tunnel, though, it's that Eilish does look really great with blue hair.

She's also in good company. While blue may not Eilish's favorite color (far from it apparently), the hue seems to be having a major moment among celebrities right now. Could Eilish have started a trend and not really meant to?

Back in January, Ruby Rose switched up her hair (something she actually does pretty often) and went with a gorgeous shade of ice blue not that different than the hue that Eilish has also rocked.

Then there was Lady Gaga's blue hair that matched her periwinkle gown at the Golden Globe awards this year. Maybe blue is good luck since she left the show with a statue.

Of course, there's Kylie Jenner's blue hair which has seen several different iterations much like Eilish's own.

While Billie Eilish may hate her blue hair, thanks to some permanent dye, the look doesn't seem like it's going anywhere any time soon. If there is a good part of having a hair color you hate, at least you look great in it.