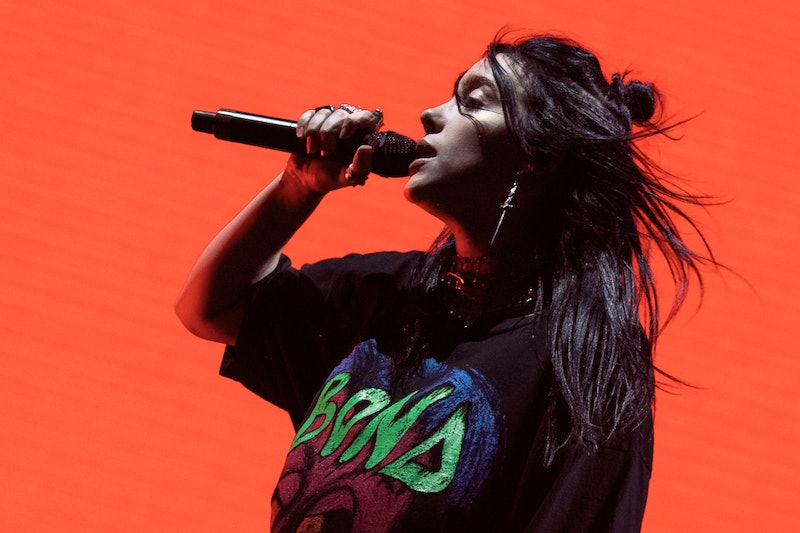 In a powerful interview with Rolling Stone, 17-year-old breakout star Billie Eilish's comments on anxiety invited readers into her experiences with depression, self-harm, and panic attacks. From experiencing body dysmorphia as a 12-year-old dancer to self-harming for the next few years, Eilish described the ways that people’s perceptions of her success clashes with her internal experiences. Those perceptions, she said, don’t tend to include her nightly panic attacks. But she’s taken many steps to prioritize her mental health.

Going back on her current When We All Fall Asleep tour induced Eilish’s first panic attacks, she told Rolling Stone, leaving her crying for hours each night. To make sure she was able to maintain her mental health on tour, the tour itself was shaped to fit her mental health needs. Upgrades to the structure of her tour, such as more days off between shows, to an upgrade to her bedroom and shower space on the tour bus, were meant to support Eilish's mental health. This also included therapy and a chartered “friends bus” so she can keep her support system around her. She told Rolling Stone that “It cost a lot of money, and I don’t know if we can even afford it. But I needed it for my mental health, you know?”

Eilish is hitting on something powerfully important here about the relationship between a person’s work environment and their mental health. Schools (often a young person’s primary ‘work’ environment) and workplaces place the burden of receiving limited accommodations on people with disabilities. These accommodations (extra time on tests in school for some students, for example, or flexible hours for an employee) are required by the Americans with Disabilities Act (ADA) when requested by an individual with a disability. However, in order to receive them, a student or employee must first have access to getting an official mental health diagnosis, and then must feel comfortable and safe enough to present this official diagnosis to their school or employer.

But for those in-the-moment experiences of acute panic, there are still important immediate steps to take in the face of self-harm risk and panic attacks. Cantor Laura Stein, LMSW, a social worker with the Mount Sinai Center for Transgender Medicine and Surgery, tells Bustle that the first step in protecting yourself during a panic attack is to recognize that you're having one. "Because of stigma and lack of healthcare access, many people are not educated about the symptoms associated with panic attacks," she says, "and therefore, cannot identify them in themselves." This is especially true of marginalized populations, like trans individuals, who Cantor says experience "higher rates of stigma and decreased access to health care and mental health care." Cantor says you might be experiencing a panic attack if you're having "symptoms such as shortness of breath, numbness, chest pains, feelings of doom, dissociation and sweating."

Once you're able to identify a panic attack, Cantor advises prioritizing your own safety. "The first thing to do when experiencing a panic attack is to go to a safe place to minimize risk for injury," she says. "Next, practicing mantras to remind yourself that you will be ok and you will get through it, is an important way to mitigate the effects of the attack. Such mantras can be developed with the help of a therapist and then used in moments of activation." And, if you have access to a psychiatrist who can prescribe medication, Cantor says that those "can also be helpful in the immediate moment of a panic attack."

In the long term, strengthening your resiliency against panic attacks through continued therapy is important, Cantor says. And, when thinking about long-term health, it's important to remember the ways that Eilish is modeling an alternative workplace model: instead of making as few structural changes as legally possible to accommodate her mental health, Eilish’s tour altered its entire structure to support her mental health. Of course, as she pointed out to Rolling Stone, it was an expensive endeavor, but it still serves as an important model for people needing to feel empowered to assert that they need changes made to fit their needs at school and at work. Because you're definitely not alone in your anxiety, and you deserve to have your needs met.