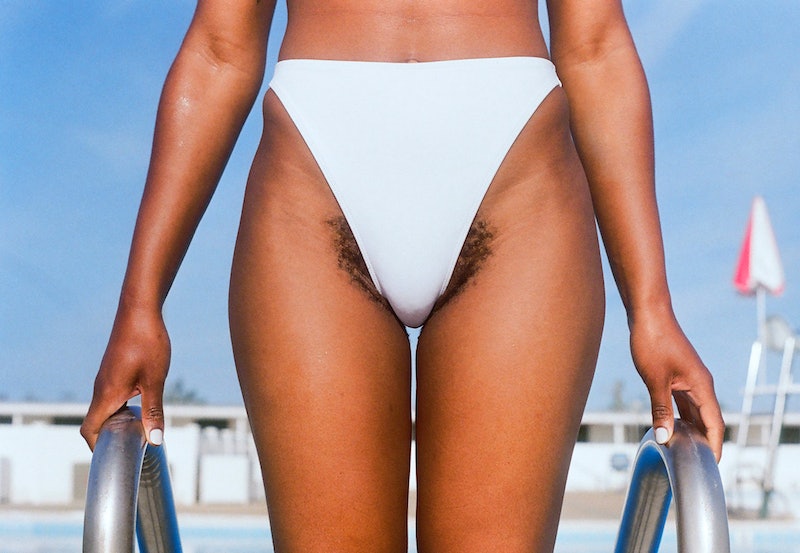 Billie is changing how we approach body hair, and the razor company is on a mission to destigmatize hairiness. Billie's new “Red, White, And You Do You" campaign celebrates pubic hair, tackling the taboo that body hair at the beach is offensive. The new campaign comes just in time for the Fourth of July, where many people will be packing their beach bags and heading towards some kind of body of water.

"Since it's the beginning of summer, and many of us are heading to the beach, we wanted to challenge the notion of being 'summer ready,'" Georgina Gooley, co-founder of Billie, shares with Bustle. "A lot of women feel the pressure to remove their body hair when they're wearing a bathing suit so we felt like it was the perfect time to get out there and say 'no matter what you choose, you're already summer ready.'"

The campaign comes in time for the one year anniversary of Project Body Hair, which was the brand's revolutionary pledge to show actual body hair in its ads. No beauty brand has ever done that before. The “Red, White, And You Do You" film stars women confidently sporting body hair at the beach, reinforcing that shaving is a personal choice.

Partnering once again with Ashley Armitage, who directed Project Body Hair and is known for her work reclaiming the female gaze, the advert is full of confident beach babes. The video opens up with a pan of three women. One has a hairy bikini line, the other one has a wispier version, and the third is picking a wedgie.

The short flick then cuts into different beach scene snaps, where girls are uncrossing their legs while sitting in beach chairs, lounging on boards with hairy armpits, and coming out of the pool with wet and hairy bikini lines. The women in the video are so nonchalant about their body hair choices that you can't help but wonder why you should be embarrassed about your own.

But Billie especially focused on the pubic area for a specific reason, one that may seem odd at first for a shaving company to tackle.

"By refusing to acknowledge that body hair exists (wherever it may be), the shaving category has been body shaming women — it's saying 'you should be ashamed of having hair there,'" Gooley explains. "By showing unshaved bikini lines, we're acknowledging that this hair exists and hoping to remove the shame around it. Our hope is that women aren't judged for having or removing body hair. It's a personal choice that nobody should have to apologize for."

"Historically, women's razor brands have portrayed body hair as 'socially problematic' in an attempt to sell more razors — they instilled shame around having women's body hair," Gooley says. "From day one, it was important to us that we didn't contribute or encourage this ideology. We've always wanted to put our audience ahead of our product, so emphasizing the importance of choice has always been core to what we believe."

And by being supportive, Billie will inspire devoted shoppers — even those who don't shave on a daily (or monthly) basis. The brand hopes to gain a devoted and passionate following by supporting choice and uplifting women, hoping that a consumer will respond more positively to that ideology than one of shame.

This summer, Billie encourages you to do you. Whether that's with a trim bikini line or a full bush, it's truly up to you.