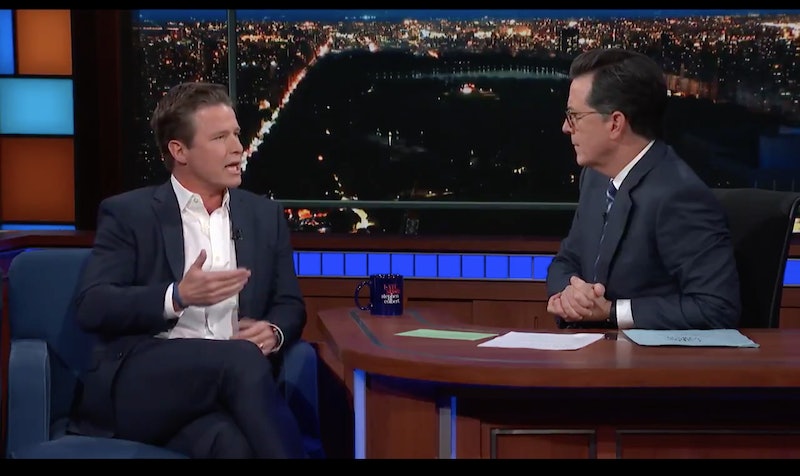 The Late Show With Stephen Colbert
By Sarah Friedmann
Dec. 5, 2017

On Monday's episode of The Late Show, former Today show host Billy Bush told Stephen Colbert that Trump is playing with his accusers' lives by now reportedly denying the veracity of the 2005 Access Hollywood tape. Though he's called out Trump's supposed denial before, his words on Monday night are a reminder that while Trump faces little accountability for walking back on his apology, his accusers have put everything on the line. White House Press Secretary Sarah Huckabee Sanders said that Trump hasn't changed his position on the tape.

Bush's appearance on The Late Show is the first interview he has done since Trump was elected president. Back in October 2016, Bush was fired from his position at the Today show as a result of the aforementioned tape, in which Bush laughed as Trump detailed the way in which he could supposedly force himself upon women. Bush recently wrote an op-ed in the New York Times following reports that Trump now allegedly denies that the voice on Access Hollywood tape is his, even though he previously publicly admitted that the voice on the tape was indeed his own. “Anyone who knows me knows these words don’t reflect who I am. I said it, I was wrong, and I apologize," Trump said in a video released in October of last year.

Now, as he told Colbert, Bush worries that Trump is toying with his accusers' lives and well-being by reportedly questioning the tape.

Bush detailed this frustration and concern to Colbert:

Last week he [Trump] came out saying 'that's not my voice on the tape ... Like I said ... you can't say that ... that is your voice ... I was there ... you were there ... that's your voice on the tape ... Then you got 20 women at the time -- I don't know what the exact number is because there is more -- but 20 women who used their names ... All of these women came out with their names and told their detailed accounts. So when he said this ... it infuriated me on the personal front and then I ended up Googling and I read an article with all of these women's accounts ... and I say you're reopening wounds on them too. Enough's enough ... stop playing around with people's lives.

He also told Colbert that Trump's reported backtracking regarding the tape inspired him to write his aforementioned Times op-ed. In the piece, Bush also discussed his concerns about the implications of Trump's "revisionist history" regarding the recording, saying "I can only imagine how it has reopened the wounds of the women who came forward with their stories about him, and did not receive enough attention. This country is currently trying to reconcile itself to years of power abuse and sexual misconduct. Its leader is wantonly poking the bear."

The former Today host further noted that, while he is angered by Trump's most recent actions, he also still holds himself accountable for his own actions (and lack of pushback) when he had the initial taped conversation with Trump back in 2005. As Bush told Colbert, "No question, I feel like I sacrificed a little bit of myself in the moment."

Bush and Colbert wrapped up their conversation by discussing the myriad of recent sexual assault and harassment allegations against powerful men and collectively emphasized the importance of believing women. However, Bush cautioned that the effective dialogue that can achieve real solutions might not occur if a concerted effort is not made, especially in the middle of these politically uncertain times. Ultimately, the Access Hollywood tape was likely just the tip of the iceberg in starting a very important and very needed national conversation on alleged sexual misconduct.