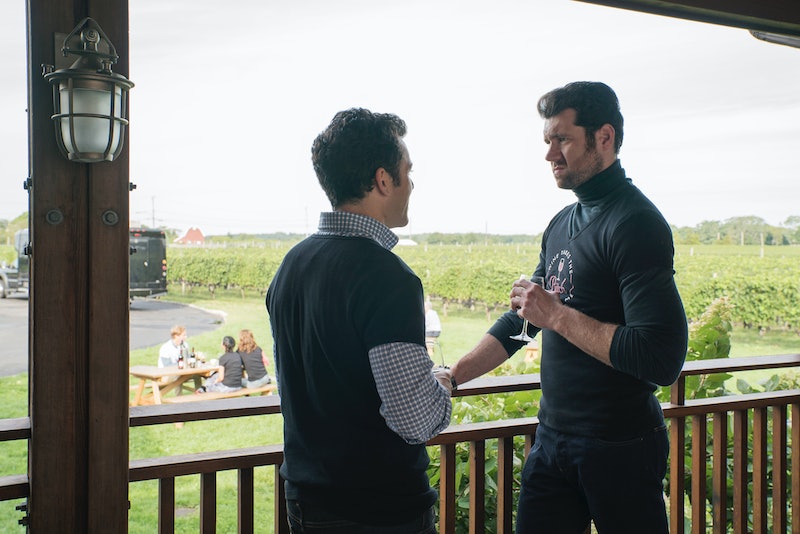 Netflix's Friends From College lets you in on the antics of a reunited college friend group 20 years after graduation — you know, when they should be "grown ups." Of course, these old friends from Harvard can't help but slip back into their Cambridge ways, much to the chagrin of their significant others. Comedian Billy Eichner plays Felix in Friends From College, one of said boyfriends who just wishes the self-proclaimed "friend group" would act like adults. Fans of Eichner in Billy On The Street and Hulu's Difficult People may be surprised to see a whole new side of the actor in this Netflix comedy, as Felix is the compassionate voice of reason. (Minor spoilers for Friends From College coming up!)

Eichner has become famous for making people laugh in his loud and wacky roles in TV shows, but in Friends From College, he shows a more subdued, grounded side as Max's boyfriend Felix, who is a fertility doctor. Literary agent Max (Fred Savage) reunites with his Harvard friend group when Ethan (Keegan-Michael Key), an author, and his lawyer wife Lisa (Cobie Smulders) move to NYC and back in the orbit of everyone else. That's then when Max reverts to his college ways, mostly with Ethan as they try to brainstorm new book projects for the struggling writer — who Max also happens to represent. Felix also finds himself entangled with his partner's Harvard buddies when Ethan and Lisa become his patients as they undergo fertility treatments.

In the midst of all the Harvard nostalgia, Eichner's Felix is the sole mature one. In one episode, he just wishes that Max and Ethan — high as kites and brainstorming YA book ideas — would just let him sleep, because Felix has to perform surgery in the morning. In a later episode, Felix takes Max to an exclusive restaurant for his birthday, only to have the dinner date be crashed by Lisa and Ethan, who are panicking about how they messed up their fertility treatment. Felix tries to calmly advise them, to no avail.

Felix understandably gets frustrated with how Max makes his college friends a priority — even above Felix — and it results in their break up when Max doesn't realize their party bus left Felix at one of the wineries they visit on their tour. When Max and the party bus return to the winery, Felix is hurt. "You left me for 90 minutes," he yells at Max in an appropriately grounded version of the famous "Eichner scream." "I would notice if you weren't there for 45 minutes ... You're a different person when you're around them and I don't know who that person is," he says.

Felix in Friends From College is a part that shows Eichner has great range as an actor. As funny as he is screaming at strangers in Billy on the Street, he's capable of taking on more subtle roles too.