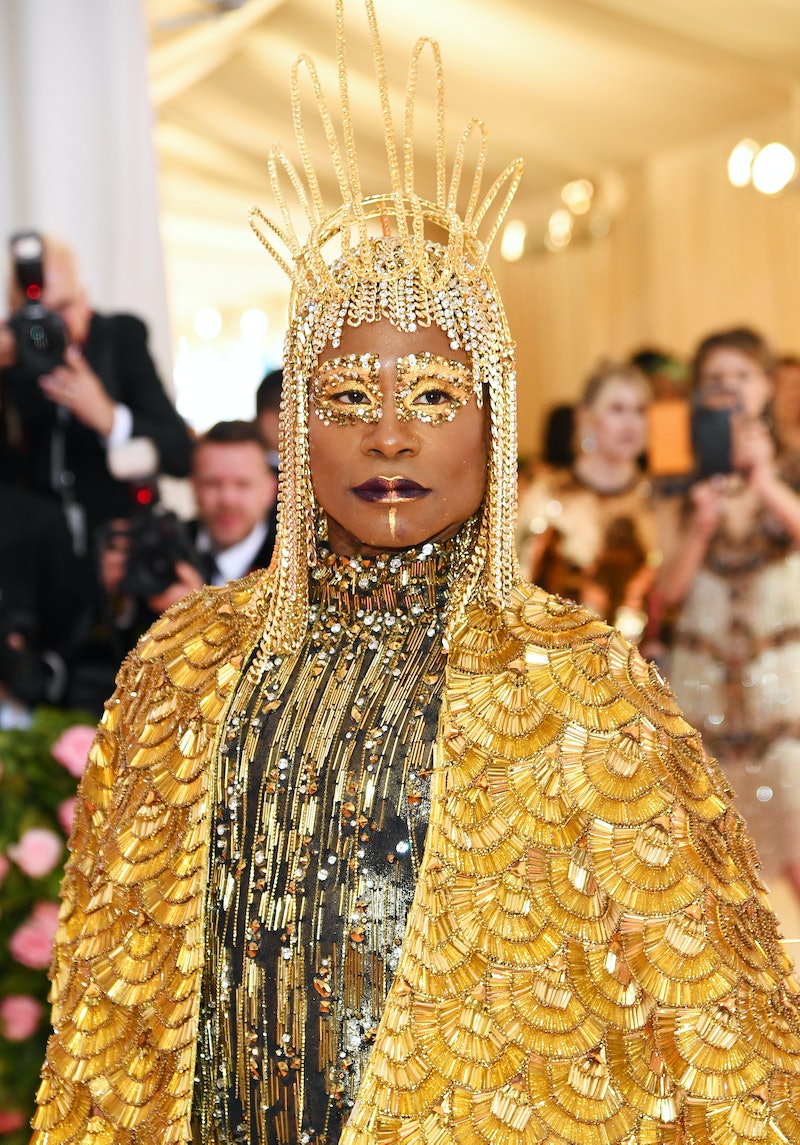 Actor Billy Porter has been known to serve incredible red carpet looks. For the Met Gala, the Pose star came ready to slay, dripping in gold all the way down the red carpet. Billy Porter's 2019 Met Gala outfit schooled everyone on Camp fashion, celebrating the style aesthetic's roots in ballroom culture and the LGBTQ community through his grand entrance.

In what Vogue calls a "theatrical nod to Ancient Egypt," Billy Porter arrived to the Met Gala carried by six shirtless men. All of them, Porter included, were outfitted in layers of gold. After ascending from his throne, Porter could spread his wings on the red carpet — literally. The style star wore a golden jumpsuit, gold wings, and a crown to the gala, leaving no doubt that he knows what Camp is all about.

“Coming from the theatre and being flamboyant and campy my whole life, it was a breathe of fresh air to have this focus on the genre,” Porter told Vogue of the theme. “It’s what I do.”

According to Vogue, Porter's crystal and chain fringe jumpsuit was a custom design by designer duo by The Blonds and included well over one million crystals, beads, sequins, and chains . The look included 10-foot wings and 24-karat gold diamond headpiece, which included fringe-like hair. Porter wore embellished gold shoes by Giuseppe Zanotti to complete his head-to-toe golden look.

To accentuate his ensemble, Porter went with grand makeup, including a black and gold lip that extended down his chin. His eye makeup was also golden and sequined, bringing even more gaudy elegance his look.

Prior to the gala, Porter told Vogue he was excited to put some respect on the Camp name by celebrating a style often seen as unfashionable and cheap.

“Camp is often used as a pejorative,” Porter told Vogue. “What I love about having it at the Met Gala, and contextualizing camp, is it brings honor to a word and genre that can be discounted very often, or thought of as cheesy. When it’s done properly, it’s one of the highest forms of fashion and art.”

This is Porter's first time at the Met Gala, though he tells Vogue he's been trying to get an invite for years. The tipping point for scoring him an invite, undoubtedly, was his Oscar's tuxedo gown that turned heads this year. The grand look solidified his status as a fashion fixture, winning him legions of style fans.

“How am I going to top a tuxedo dress? It’s not about topping it,” he says. “It’s just about showing up and being the best bitch you can be.”

Who can argue with that?