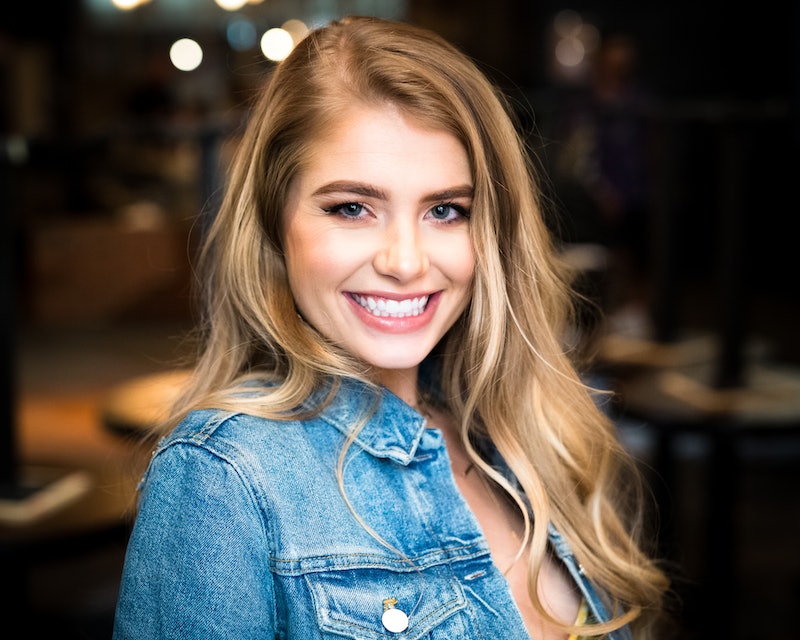 Another Bachelor star's romance has reportedly come to an end. On Saturday, June 20, Us Weekly reported that Bachelor in Paradise alum Demi Burnett and her boyfriend Slater Davis have split, just four months after the couple confirmed their relationship on social media, as per Us Weekly. Breakup rumors began last week after Demi deleted pictures of Davis on Instagram, and the two unfollowed each other on the platform. Bustle has reached out to Demi's reps for comment on the reality star's reported breakup.

Neither Demi or Davis has commented publicly on the breakup, but on Friday, Davis posted a selfie on his Instagram Story, writing, "so many ups n downs" with several broken heart emojis, as per Us Weekly. Demi and Davis began dating in January, after being introduced by fellow Bachelor alumni Katie Morton, as per ET Online. In February, Demi told the publication that Slater was, "the most incredible person" and that she was, "just obsessed with him." She added: "We're just happy and I can't get enough of him. I never want to be not around him."

In May, Demi hinted at relationship difficulties on her podcast Big Demi Energy, admitting that the couple had fought a lot since the COVID-19 pandemic began. The Bachelor alum admitted that the they did not anticipate how difficult it would be to self-quarantine with the musician's family in California. "When you spend that much time with someone and their family, it’s like you start nit-picking and you start getting mad over the stupidest stuff," Demi said.

Demi also admitted that quarantining with Slater's relatives came with unexpected obstacles as well. "There has been a couple fights where the family was involved," she said. After one argument where the musician's mother took his side, Demi asked him not to involve his family since, "it’s gonna be awkward for me and uncomfortable and I don’t want that." Slater and Demi's relationship is not the first to come under strain due to the COVID-19 pandemic, and the reality star admitted arguments had made things, "a little tense around here."

It's been a tumultuous couple of years for Demi, who first appeared on Colton Underwood's season of The Bachelor, and then had a history-making turn on The Bachelor in Paradise. During the season finale, Demi got engaged to girlfriend Kristian Haggerty, becoming Bachelor nation's first same-sex couple. Unfortunately, Demi and Kristian split in October of 2019, with the couple's long-distance relationship a likely reason for the break up.

The coronavirus pandemic has created new challenges for many couples, and given that it was in the early days, it's not too surprising the quarantine put some strain on Demi and Slater's romance. Demi may not have found her forever partner just yet, but perhaps after COVID-19 restrictions lift, fans will see the star seek love in the Bachelor franchise yet again.