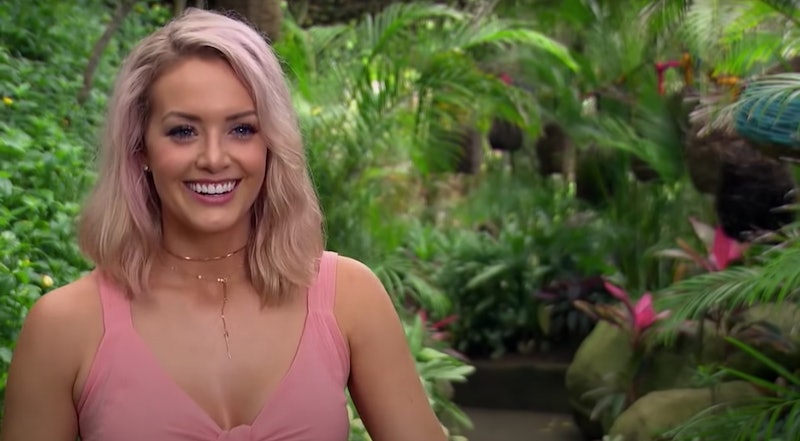 Another member of Bachelor Nation has officially expanded her family. On Saturday, Bachelor in Paradise star Jenna Cooper welcomed a baby girl, as per Us Weekly. In January, Jenna revealed that she was expecting her first child on Instagram, posting several pictures of her baby bump. One week before the pregnancy announcement, the reality star shared she'd found love again with a man named Karl Hudson IV, who is not affiliated with the Bachelor franchise.

On Saturday, Jenna posted a family photo on Instagram, writing, "I am so excited to introduce you to our baby girl: Presley Belle Hudson!" She said that the two parents were, "already so in love" and that the baby, "has a full head of brown hair, and the sweetest personality." She added a special message for friends and fans who followed along her pregnancy journey, writing, "Thank you so much for all your prayers and well wishes. Feeling incredibly emotional and blessed!"

Bachelor fans might be familiar with Jenna from Arie Luyendyk Jr.'s season of The Bachelor, and then her subsequent appearance on the fifth season of Bachelor In Paradise, during which she got engaged to costar Jordan Kimball, as per E! News. The two stars split shortly after the finale.

Jenna kept her relationship with her new boyfriend quiet for nearly a year, citing a desire for privacy. On Jan. 19, Jenna posted a photo with Karl on Instagram, writing, "Soo this is Karl. I met him a year ago, and now I can’t imagine life without him." The fitness influencer didn't offer many details about how the two met, but said he had shown her "what it's like to be with a real man" with "real morals. And with an unselfish and loving heart." The reality star added that she'd finally found the one, writing, "He is so special to me, and I feel lucky to be able to love him every day."

In January, Jenna posted about expecting her first child on Instagram, writing a letter to her future daughter. The caption read, "I hope you know that I already love you more than I could have imagined possible. I hope you chase all of your dreams, and I’ll be there supporting you the whole way." She added: "Never forget how special you are. See you in a few months."

Since the announcement, Jenna has continued to be candid about her pregnancy on social media. On Saturday, Jenna posted that she'd gone into labor on Instagram, writing, "We are heading to the hospital now..my contractions are about 4-5 mins apart. I feel fine until they hit, then I can’t really talk or move." Earlier, the reality star shared that she'd past her due date in an Instagram post, writing, "Surprise! She is still in there. Just bouncing around now, and trying to remain completely stress-free."

Even though Jenna wasn't able to find love within the Bachelor franchise, the star seems to have found her happily-ever-after off screen, and she appears to be excited to share the next step of her family journey with her followers.