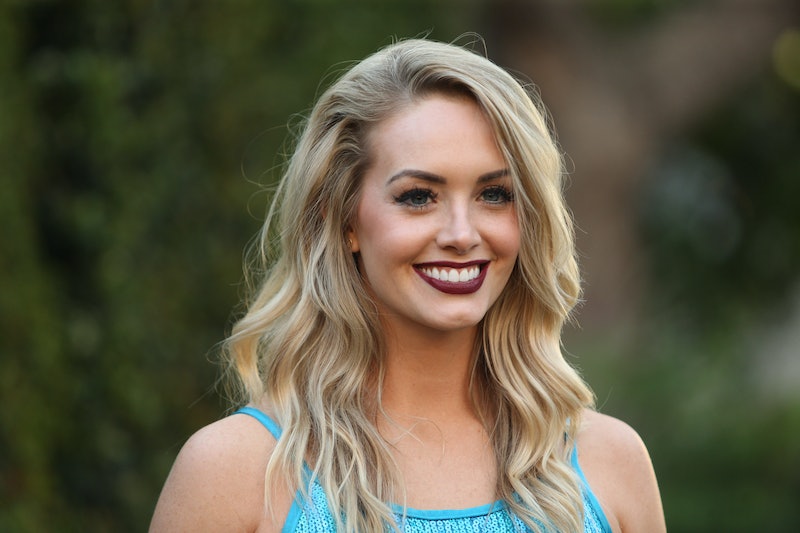 Another member of Bachelor Nation has found her happily ever after. Nearly two years after leaving the reality show, Bachelor in Paradise star Jenna Cooper announced that she's pregnant with her first child by sharing a slideshow of maternity photos in a post on Instagram. Alongside the snapshots, the reality star shared a letter to her baby, in which she revealed that she's due "in a few months."

"Dear Baby, I hope you know that I already love you more than I could have imagined possible," Cooper wrote on Instagram, sharing some of her hopes and dreams for her future child and promising that "I’ll be there supporting you the whole way." She continued, "I hope you get my spirit and sense of humor, and never stop laughing," and that "I hope you can ignore the negativity of the world, and always stand up for yourself."

In the post, Cooper also noted that she wants her child to get "your daddy’s thoughtfulness and work ethic," which is likely a reference to her new boyfriend, Karl. While the couple have been together for a year, Cooper only shared the news on Instagram a week ago, admitting that she was hesitant to post about him on social media after her very public past relationships. "I had a fear about how social media can destroy what I love," she wrote, "but this is a huge part of my life, and I think it’s about time I let you in all the way."

Explaining that she "can't imagine life without him," Cooper described her beau as "a real man, with real morals. And with an unselfish and loving heart." While opening up about her relationship with Karl, Cooper also referenced her dramatic split from Jordan Kimball in 2018 and her time on Arie Luyendyk's season of The Bachelor and in Paradise. "This is the guy ... who didn’t care what show I was on, what drama was made up about me, or how many broken pieces of my heart he had to glue back together," she wrote.

After failing to win the race car driver's heart on the reality competition, Cooper starred on Bachelor in Paradise in 2018 where she fell in love with Kimball. However, just one day after the season finale — in which Kimball and Cooper got engaged — People reported that he called off the engagement, citing rumors that Cooper had secretly been in another relationship during her time on the show.

"I’m removing myself from the relationship with intentions to take care of myself and find my happiness,” Kimball told Entertainment Weekly at the time. "Just because this has happened does not mean that I will discount how I felt for her. I will not try to play it off that it doesn’t hurt. I would be doing the love that I felt for her an injustice if I were to say that I didn’t feel strongly about this."

Cooper, however, repeatedly denied the allegations of infidelity, and claimed that the text messages at the center of the scandal were "fake." According to People, she maintained her innocence in a post on Instagram in June 2018, writing, "I did not cheat on Jordan, and I have nothing to hide." She continued, "I have been extremely open and vulnerable throughout this whole process. I was looking for love, and I found it. I was excited to share this journey with all of you."

While her time on Paradise may have ended in drama and heartbreak, it looks like Cooper has now found her happy ending, with her new boyfriend and a baby on the way.