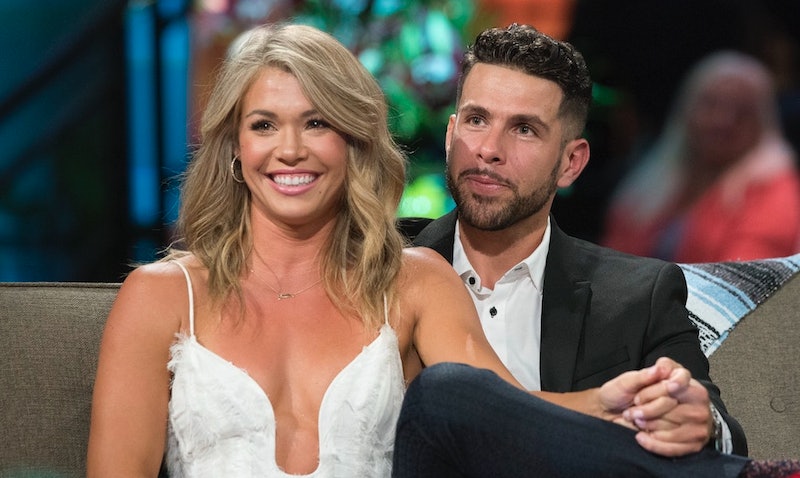 Former Bachelor in Paradise contestant Chris Randone said he missed Krystal Nielson on the heels of their February split. On Monday, Chris joined the rest of Bachelor Nation and tuned into the first part of the Bachelor finale. After a series of Tweets about Hannah Ann and Madison Prewett from Peter Weber’s current Season 24 cycle, Chris Tweeted about his estranged wife, Krystal.

“On a side note...I miss my wife,” Chris Tweeted on Monday evening, which prompted supportive responses. Chris and Krystal announced their split on Valentine's Day after nearly 8 months of marriage. In a joint statement issued to the Bachelor Nation website, the BiP alums said, “It hurts to announce that at this moment, we have mutually decided to separate. Never did we imagine this scenario, but we've come to a point where we both need to work on ourselves."

The statement added that they remain “best friends that love and care for each other so deeply.” Chris and Krystal met and got engaged on Season 5 of Bachelor in Paradise in 2018. Their June 2019 nuptials, officiated by Bachelor host Chris Harrison, had been broadcast in a BiP episode and included guests (and former Bachelor stars) Ashley Iaconetti, Jared Haibon, and Becca Kufrin.

In a lengthy Instagram post shared a day after their split announcement, Krystal elaborated on why the separation felt like the “right move” for the couple. She wrote that while the “‘conscious separation’ would be difficult to explain,” the two “care so deeply about one another that we were willing to take the risk, as WE feel that this is the right move for US.” Citing pressure from media outlets to issue a statement, Krystal added, “Were we ready? No. Did we feel pressure? Absolutely. Does it hurt to hear and read comments and judgments? Deeply. But we are choosing love and compassion over anger and fear.”

Chris and Krystal’s split shocked fellow Bachelor alums, too. On Feb. 24, Jared addressed the separation and told PEOPLE, “It’s just really sad. Whenever someone gets married, you hope that they can persevere and fight through any disagreements or problems they have in their relationship.” He added, “Would I love to see them get back together? Absolutely, but I also want what’s best for them as individuals before they can decide when they’re best together.”