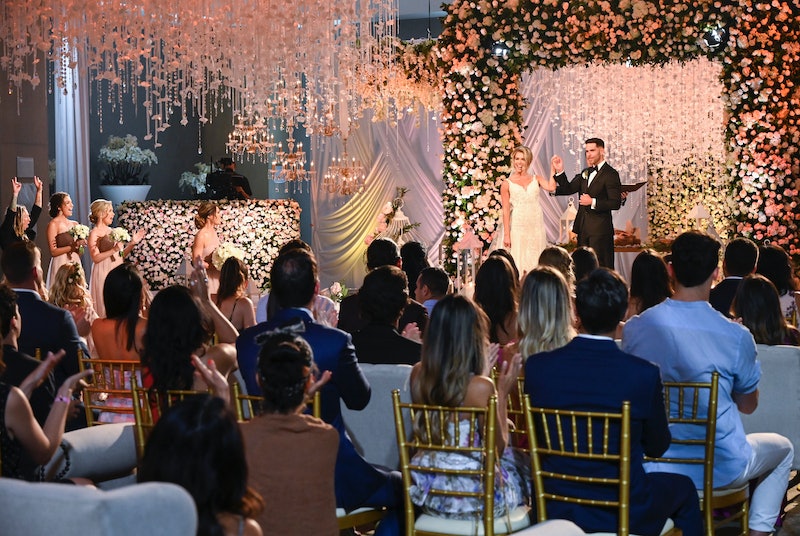 Every once in awhile, people actually find lasting love in Paradise. On the Tuesday, Aug. 27 episode of Bachelor in Paradise, Chris Randone and Krystal Nielson will be getting hitched on-camera. After competing on Season 14 of The Bachelorette vying for Becca's affections, Chris went on to appear on Season 5 of Bachelor in Paradise, where he met and consequently became engaged to Krystal. Now, they're finally tying the knot — or rather, their knot-tying is finally airing. Ahead of tonight's nuptials, Bachelor Nation can get hyped with photos of Chris and Krystal's wedding.

While their wedding actually took place on June 16 for an episode of Bachelor In Paradise, according to People, audiences will finally get to watch the two unlikely love birds exchange vows in a televised ceremony. "We are so excited to start this new chapter of our lives together," Krystal told the celebrity mag at the time. "We will have each other's backs forever." And while it will be exciting for fans to watch the nuptials themselves, it's perhaps just as entertaining to see who was in attendance, and what their reactions were to seeing former flames, rivals, and friends.

Here's what Bachelor Nation can expect from Nick and Krystal's wedding extraordinaire, according to the photos ABC has released.

According to Krystal's Instagram, her gorgeous dress is by Martina Liana Bridal Designs, while Anastasia Beverly Hills did her makeup. The resulting look is both elegant and glamorous.

These gorgeous bands are from Neil Lane, per Chris's Instagram.

According to the teaser for tonight's episode, those in attendance included Ben Higgins and girlfriend Jessica Clarke, Astrid Loch and Kevin Wendt, former Bachelorette Becca Kufrin (though it's unclear whether Garrett was also there), Kendall Long and Joe Amabile, and more.

The above photos also reveal that Annaliese Puccini and Raven Gates will also be present. And then of course, there's the current Bachelor in Paradise cast, which is where it all started for the two lovebirds one year ago.

According to Chris's Instagram, his posse is comprised of Ryan Kaufman, Daniel Thomsen, Ricky Sakhuja, John Angelicchi, and Brandon Warner. While the majority of them have private Instagrams, they mainly appear to be Florida-based.

Their wedding took place at Mexico's Vidanta Resort, according to Krystal's Instagram. "Perfect venue, perfect sunset for our first night as husband and wife!" she wrote, in part. And it looks like the ceremony went off without a hitch, with none other than Chris Harrison officiating (because who else?).

While there's no word on what their first dance song was, it's a nice opportunity to see Krystal's stunning hair and dress one more time.

The happy couple were rendered in miniature on top of their understated wedding cake, where they're depicted holding realistic versions of their two dogs.

While fans will have to wait until the wedding special airs to hear what Angela is saying to Chris and Krystal, it looks incredibly heartfelt, from their expressions.

But while Chris and Krystal's wedding photos look nothing but picturesque, it seems like there may be some drama brewing behind the scenes with Derek and John Paul Jones as they compete for Tayshia's affections. But let's hope they can keep it together during the wedding itself as the happy couple get their fairytale ending.