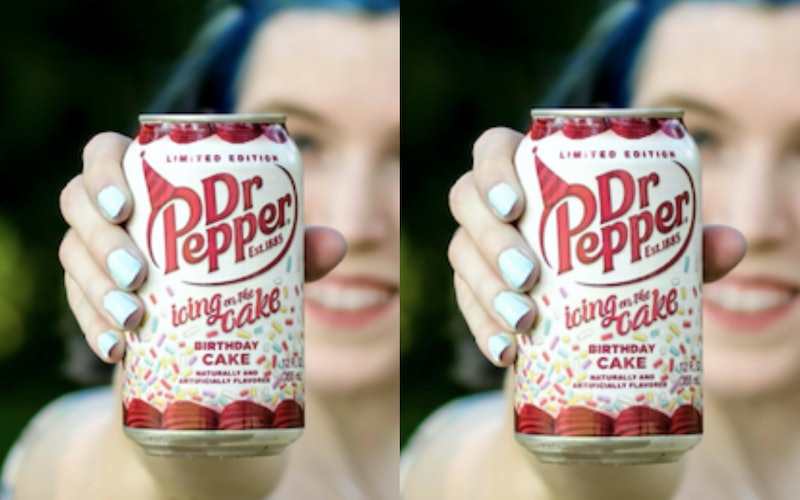 And today in Things Which Are Not Really New, But Which Are New To Me — or, similarly, Things Which Are Not Really News, But Which Are News To Me — we have this: Birthday cake-flavored Dr. Pepper exists. The can is covered in a delightful confetti illustration; the Dr. Pepper logo on the label is wearing a little birthday hat; and, best of all, the official flavor name seems actually to be “Icing On The Cake” Dr. Pepper. It’s been around for about a year, if social media is anything to go by — but there’s a reason many of us are only just finding out about it now: You can only get it if you’re a member of the Dr. Pepper “Pepper Pack.” I’ll admit to being a little disappointed that I can’t just run out to the store and grab a six-pack at my leisure — but I did a little digging, and it turns out that both the Pepper Pack in general and Birthday Cake Dr. Pepper might be a bit more accessible than at first they appear to be. Sometimes, the internet is a wonderful, wonderful place.

The Pepper Pack is Dr. Pepper’s brand ambassador program. It seems to date back to around 2017; post inviting interested folks to apply appeared on the official Dr. Pepper Facebook page on April 11 of that year, while a tweet sent out by the brand’s official Twitter handle on May 2 elaborated on the Pepper Pack’s position as “our first-ever advocacy program.” Like many brand ambassador programs, there are quite a few terms and conditions to which you’re required to adhere, should you be chosen for membership — but what it boils down to is mostly posting about the brand with certain hashtags and types of content on social media and occasionally participating in events in exchange for receiving “free products and other incentives such as but not limited to discounts, coupons, and gift certificates as compensation.”

The birthday cake-flavored Dr. Pepper — and, indeed, the whole package that goes along with it — is one of those “free products and other incentives.” According to the many, many social media posts using the hashtag #DrPepperBDAY, Pepper Pack members receive a package sometime close to their birthday filled with all sorts of goodies: Party poppers, balloons, some sort of birthday crown (I think), and, of course, six cans of birthday cake-flavored, “Icing On The Cake” Dr. Pepper. There’s also a note that reads as follows:

“TO THE BIRTHDAY PEPPER,

Since you’re a die-hard Dr. Pepper fan, your birth month is, well, kind of a big deal to us. So to celebrate, we’ve created a limited-edition Birthday Cake-flavored Dr. Pepper and some exclusive party supplies to help commemorate your existence. Don’t drink it all in one place. Or do. It is YOUR birthday, after all.

There’s also a post-script with the instructions for posting about the package on social media (because that’s the whole point of brand ambassador programs): “P.S. Do us a solid and share your Dr. Pepper Birthday Cake photos using #DrPepperBDAY,” it reads. “We want to celebrate with you!”

It’s not known precisely when the birthday cake flavor version of the soda was first developed, nor when the brand decided to begin sending out #DrPepperBDAY packages to its ambassadors — but it does seem to have been sometime around the summer of 2018. The earliest post using the #DrPepperBDAY hashtag on Instagram dates back to Aug. 7, 2018, with a wide variety of other posts debuting a day later on Aug. 8. On Twitter, meanwhile, user @JKMerm’s post seems to be the earliest instance of #DrPepperBDay; that post arrived on Aug. 11, 2018.

As for what the stuff actually tastes like? That, I do not know. Although photos of the cans and packages have been liberally sprinkled throughout social media by lucky Pepper Pack members, no one seems to have actually reviewed the flavor. My sense is that it probably tastes something like a cherry-vanilla cola; “birthday cake” as a flavor is typically a super sweet vanilla, and Dr. Pepper — despite not actually being cherry-flavored (does anyone actually know what the “23 flavors” it’s supposed to have are?) — often recalls the taste of cherry cola. (To me, at least. And yes, I am a Dr. Pepper devotee; it’s my favorite of the mainstream sodas.) Would a cherry-vanilla-esque “birthday cake” flavor taste substantially different than the actual Cherry-Vanilla Dr. Pepper flavor that already exists? I have no idea, but I’d love to find out.

The good news is that birthday cake-flavored Dr. Pepper might be easier to get your hands on than you think. No, you can’t buy it in stores, and yes, you do have to be a member of the Pepper Pack in order to get it — but it doesn’t appear that you need thousands of followers on your social media handles to be accepted into the Pepper Pack program in the first place. Many of the Pepper Pack members that have posted about their Dr. Pepper birthday packages on Twitter and Instagram aren’t “influencers,” “Instagram models,” or even necessarily verified users; they’re just regular people who really like Dr. Pepper and don’t mind posting about it from time to time.

Want to apply for the Pepper Pack yourself? Head here. There’s no guarantee you’ll be accepted to the program, but it’s worth a shot, right?

More like this
Learning To Love, Not Judge, The Lunchbox Wives Of TikTok
By Esther Zuckerman
An Expert Weighs In On The Viral Raw Carrot Salad Trend
By Alexis Morillo
I Spent 2 Years Trying TikTok’s Dating Advice
By Kailynn Johnson
Wait, Does Liking Someone's IG Story = Shooting Your Shot?
By Alexis Morillo
Get Even More From Bustle — Sign Up For The Newsletter
From hair trends to relationship advice, our daily newsletter has everything you need to sound like a person who’s on TikTok, even if you aren’t.