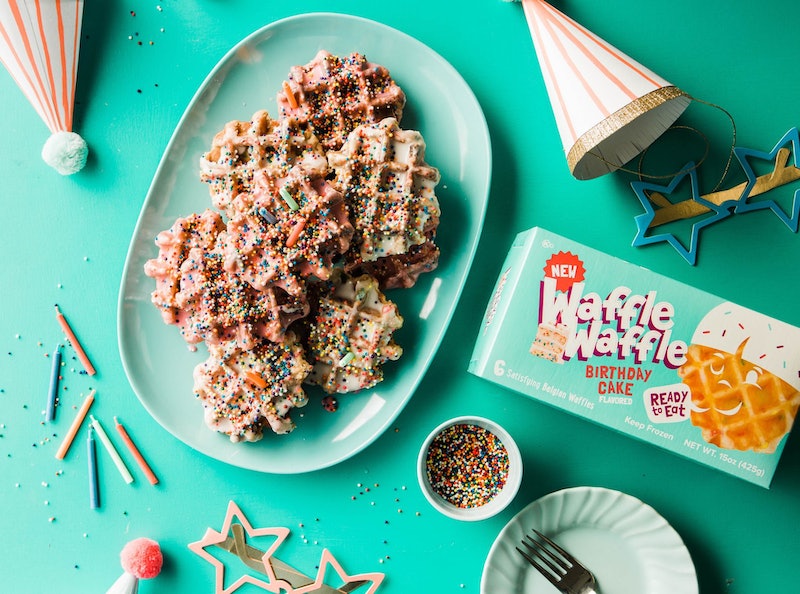 We’re currently deep in the throes of a birthday cake-flavored popularity spike, so consider this tidbit one more item carrying the trend forward: You can get Birthday Cake-flavored Belgian waffles by WaffleWaffle at Walmart now, letting you experience the joys of rainbow sprinkle-filled waffles hot from your very own toaster whenever you like. To be fair, they’re not exactly new — they hit shelves back in the fall — but they’re still notable, because, I mean… birthday cake-flavored toaster waffles. Talk about the perfect way to make breakfast a celebration every day, am I right?

Founded in 2009 by Justin Samuels and Samuel Rockwell (no, not that Sam Rockwell), WaffleWaffle specializes in Liège-style waffles — Liège waffles being one of the two varieties of waffles that hail from Belgium. Liège waffles aren’t what most Americans think of as Belgian waffles; those are closer to the Brussels waffle, which, according to online foodie magazine Taste, is “made of light, usually yeasted dough that doesn’t have too much flavor on its own but is typically served with a variety of toppings, like whipped cream, fresh fruit, and melted chocolate.” Liège waffles are also yeasted, but the dough is more akin to brioche dough, with pearl sugar lending it a distinctive, caramelized flavor. They’re delicious — and also kind of hard to find in the United States.

Samuels and Rockwell both fell in love with Liège waffles while traveling around Europe when they were in college, so with WaffleWaffle, they hoped to bring the classic Belgian snack they grew to adore to the United States. For many a year, the company was known primarily for its ready-to-eat waffles and Stroopwafel offerings, neither of which require heating to enjoy — but in the fall of 2018, they branched out into frozen waffles.

Which brings us to today: Despite the fact that WaffleWaffle’s frozen options have been available for months, I have only just discovered they exist, courtesy of food Instagrammer Junk Food Mom — and obviously I will need to locate my nearest Walmart ASAP so I can get a box to try myself.

Available in four flavors, according to WaffleWaffle’s Instagram — Homestyle, Chocolate Chip, Cinnamon Roll, and the aforementioned Birthday Cake — the frozen WaffleWaffles launched at the beginning of October. From what I can gather, they’re a Walmart exclusive; in addition to Instagrammers like Junk Food Mom, The Sweet Foodie, and One Second Scoop identifying them as Walmart finds, pretty much all of Waffle Waffle’s own Instagram posts about them tag or at only Walmart — no other retailers. There are two ways to cook them: You can either microwave them on high for 25 seconds or pop them in your toaster oven at 400 degrees F for four to five minutes. But, I mean, let’s face it: Even if microwaving them is a tiny bit faster, the toaster oven is where it’s at. When it comes to frozen waffles, you just can’t get that crispy finish any other way. For the curious, they come in boxes of six.

Some reviews (primarily on Instagram) have observed that the waffles don’t have a super strong flavor all on their own; then again, both Liège waffles and Brussels waffles are traditionally a bit less sweet than American waffles tend to be because they’re meant to be topped. They’re typically a vehicle for whatever you put on them, so it stands to reason the same would be the case for WaffleWaffle’s take on them. Junk Food Mom did note that the Birthday Cake variety has sprinkles in it, though — just like a good Funfetti birthday cake should — so if you’re into food aesthetics as much as you are taste, WaffleWaffle’s frozen Birthday Cake treats have you covered.

They’re not currently available for order via Walmart’s website, but you can use Walmart’s store finder to dig up the nearest location to you; I’d recommend calling the store to see if they have WaffleWaffle’s frozen Birthday Cake waffles in stock before making the trip out to it, though. And if all you local Walmarts are out of them, the good news is that WaffleWaffle also makes ready-to-eat Birthday Cake-flavored Liège-style waffles that can be ordered directly from the company or from third-party sellers on Amazon. Don’t forget the birthday candles!