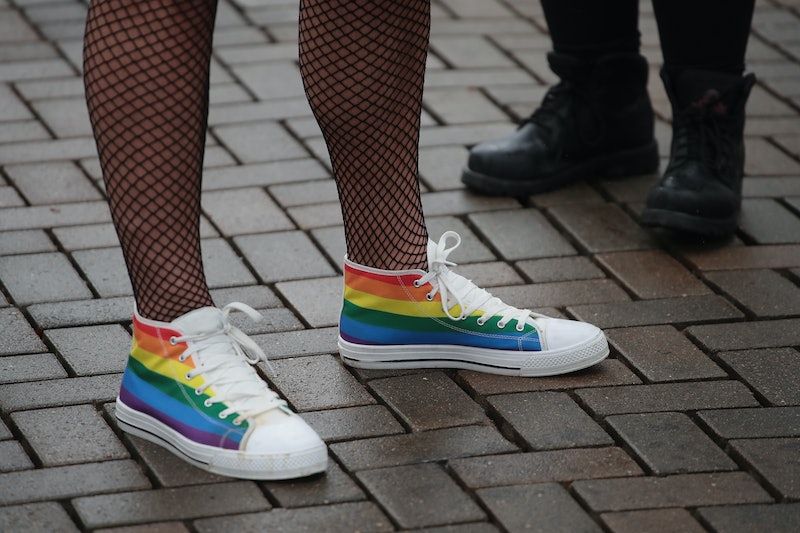 "Bisexual and pansexual people are frequently subjected to discrimination and a lack of social acceptance — even within the lesbian and gay communities," research officer Julia Taylor, who led the research from La Trobe's Australian Research Centre in Sex, Health and Society, said in a press release. "People are assumed to be heterosexual or homosexual depending on the gender of their partner and there is a lack of widely visible bisexual role models and few organized communities."

According to the study, 40% of cisgender bisexual participants reported depression, 60% said they experience significant psychological distress, 25% have attempted suicide, and 80% reported suicidal ideation. The numbers were even higher for gender diverse bisexual people. "Many bisexual and pansexual people feel their sexuality is invisible or they are not respected and this is a way for them to be heard," Taylor said.

As a bisexual woman, I am familiar with not feeling accepted by the LGBTQ community. Jade Sophie Wilson wrote for The Establishment that when she came out as bi, her heterosexual friends were far more accepting than her queer friends. To say the least, these kinds of experiences can be isolating, upsetting, and invalidating for people who identify as bisexual. It's also what keeps many bi people from disclosing.

This behavior, aka biphobia, appears to be rooted in both insecurity and being unable to comprehend or relate to how a person can be attracted to more than one gender. Stereotypes persist that bisexual people are "promiscuous" or "confused" about their sexuality. An article published in the LGBT Sentinel acknowledged that bi phobia is basically the worst kept secret in the LGBTQ community.

"Biphobia [can] include blatant discrimination from LGBT organizations, which does occur, refusing to associate with a bisexual person simply because they are not 'fully gay or lesbian,' and more. Bisexuals are also often labeled as being 'greedy' ... They have also often been told to simply 'pick one' or 'make up your mind,'" the Sentinel explained. "Bisexual people often face unique challenges when it comes to dating as well. For instance, some gay or lesbian people will refuse to date someone who is bisexual because they used to date someone of the opposite sex or the gay or lesbian partner is afraid that their bisexual partner will leave them for someone of the opposite sex."

Because these experiences can contribute to poor mental health, a 2016 study published in the Journal of Adolescent Health recommended tailoring mental health services to the specific needs of the bi community, highlighting the "importance of considering LGBQ groups separately in the context of a behavioral health assessment, especially for females."

These findings are in line with a recent study from The Trevor Project that found that bisexual youth have a higher risk for suicide than their straight, gay, and lesbian peers. The results of all three of these studies not only highlight the need for increased bi-specific mental health resources for bisexual youth and adults, they also provide an opportunity for candid conversations and increased awareness about the alienation of people who identify as bi.

More like this
"Lavender Haze" Star Laith Ashley Breaks Down Filming With Taylor Swift
By Jake Viswanath
Gen Z Are Twice As Likely To Identify As Queer, According To New Data
By Sam Ramsden
Ozzie’s Coming Out Scene With Kitty On 'That ’90s Show' Has Twitter Sobbing
By Brad Witter
Here’s What Happens To Bill & Frank In 'The Last Of Us' Video Game
By Brad Witter
Get Even More From Bustle — Sign Up For The Newsletter
From hair trends to relationship advice, our daily newsletter has everything you need to sound like a person who’s on TikTok, even if you aren’t.