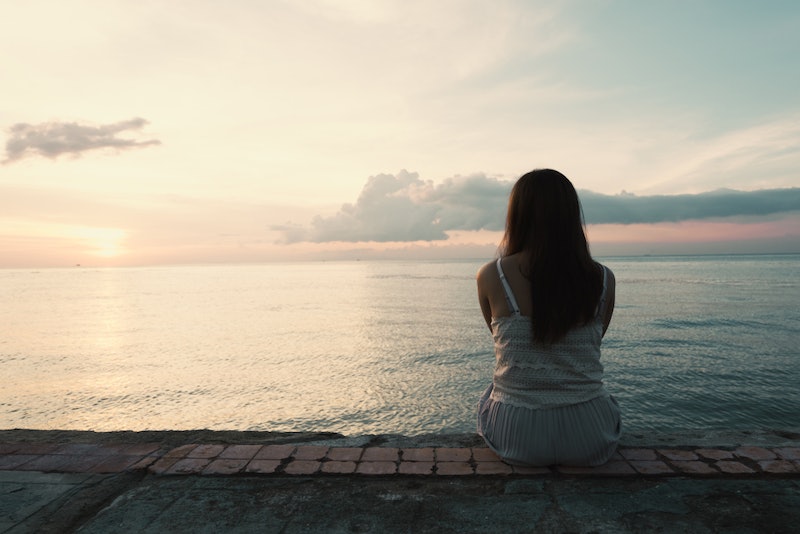 As a bisexual woman, I am all too familiar with the persistent feeling of not fitting in anywhere. A new report by The Trevor Project found that this is common among those who identify as bisexual. The report also revealed that bisexual youth are at greater risk for suicide than other members of the LGBTQ+ community or their straight peers. Despite myriad reports that come to similar conclusions, there is a severe lack of information about how to improve mental health outcomes for bisexual youth. That has to change, because people's lives literally depend on it.

The Trevor Project's analysis looked at the Center for Disease Control (CDC)'s Youth Risk Behavior Survey, which is a nationally representative survey of teenagers administered in schools. Their analysis specifically looked at how the issues presented affected bisexual youth.

"Bisexual youth represent the largest proportion of LGBTQ high school students, and The Trevor Project’s analysis of the CDC's YRBS data indicate that they are more likely to experience victimization, depressed mood, and suicide attempts than their straight, lesbian, and gay peers," a statement from The Trevor Project about its report noted. "These disparities are likely related to increased minority stress faced by bisexual youth who may be stigmatized by both straight and gay/lesbian communities."

The findings also detailed that one in three bisexual teens reported being bullied and one in five reported being forced to have sex, which is significantly higher than their straight, gay, or lesbian peers. According to the Human Rights Commission (HRC), though bisexual people make up the largest single group in the LGBTQ+ community, they, along those who identify as bi+, queer, pansexual, or gender fluid, experience a higher level of stress and anxiety than other members of the LGBTQ+ community. A 2018 HRC report in partnership with the University of Connecticut found that these feelings persist well into adulthood.

In addition, the HRC’s report found that in comparison to heterosexual adults, bisexual adults are more likely to binge drink and they experience double the rate of depression. The HRC also noted that bisexual teens are less likely to be out to their teachers and even their doctors, in part because of biphobia, which the Bisexual Resource Center defines as "mislabeling bi+ people as lesbian, gay or straight, even when they come out as bi+."

I can confirm that biphobia alive and well in 2019. In fact, I have bi friends who are not even out to their romantic partners. The HRC noted that biphobia is even greater toward "bisexual people who are also transgender, people of color and/or people with disabilities, who experience biphobia at the intersections of transphobia, racism, and ableism."

While another report found that LGBTQ+ teens are less likely than previous generation to use traditional labels for their sexuality, this data shows that bi erasure and biphobia are still very real problems. If you want to educate yourself during Bisexual Health Awareness Month (happening throughout March), the Bisexual Resource Center has myriad resources for both bisexual people and allies.

More like this
The 19 Best Tweets & Memes About Bisexual Awareness Week
By Lexi Inks
This Psychological Effect Might Be Keeping You From Hitting Your Goals
By Lexi Inks
Pro Footballer Zander Murray Is "Blown Away" By Support After Coming Out
By Sam Ramsden
19 Latinx Therapists & Mental Health Experts To Follow On Instagram
By Kaitlyn Wylde, Naydeline Mejia and Lexi Inks
Get Even More From Bustle — Sign Up For The Newsletter