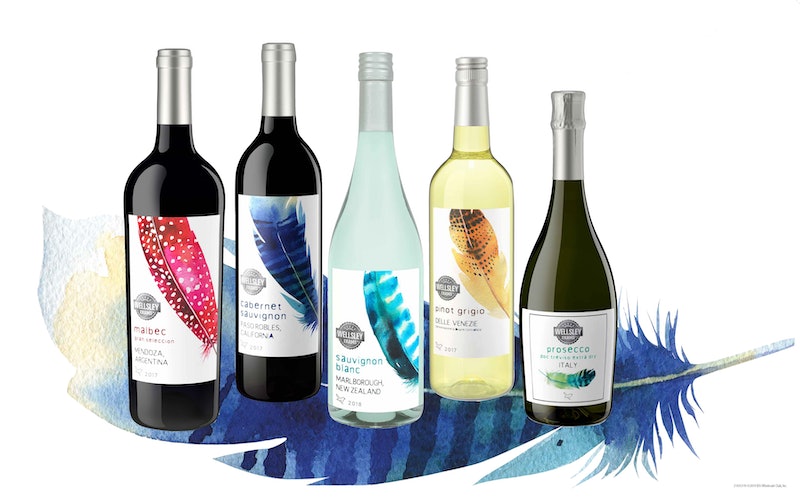 Another beloved retailer has entered the affordable yet classy wine game: A line of new wines from BJ’s Wholesale Club’s Wellsley Farms brand brings you vino from around the world for less than $10 a pop. Wellsley Farms is one of BJ’s in-house brands — kind of like Kirkland at fellow wholesale warehouse Costco, or Archer Farms at Target — and encompasses a wide range of grocery items, from snacks to deli items and entrees. But while a lot of these offerings appeal to families, the new wines are sure to please a much larger crowd, from parents unwinding with a glass at the end of the day to those who like to throw glam dinner and cocktail parties without breaking the bank.

This isn’t the first time BJ’s has offered wine under the Wellsley Farms label; however, previous offerings hailed exclusively from California: The Chardonnay came from Monterey, while the Red Blend and Cabernet Sauvignon came from Lodi. The new line, which was announced on Wednesday, differs from these older options in that they’re global in scope. Said Bonnie Volpe, BJ’s vice president and division marketing manager for beverages, in a press release, “At BJ’s, we pride ourselves on offering unbeatable value and high-quality products. That’s why we’re excited to introduce our new Wellsley Farms wines from some of the finest winemaking regions in the world. Whether it’s a special occasion or a quiet night at home, BJ’s shoppers can celebrate every moment with these delicious, incredibly priced new wines.”

The new line also includes more variety: The collection features two reds, two whites, and a prosecco, for a total of five wines. (No rosé, though. Sorry, Team Rosé All Day.) The first of the reds, the Wellsley Farms Cabernet Sauvignon, does come from California; it’s a Paso Robles red that “highlights the best of central California’s coastal wine-growing region,” according to the press release. Notes include blackcurrant, although it’s also said to be “delightfully balanced” and with “a smooth finish.” The Malbec Grand Seleccion, meanwhile, comes from (where else?) one of Argentina’s key winemaking regions, Mendoza.

The whites originate where you’d expect them to, as well: Out of Venezie, Italy, we have the Wellsley Farms Pinot Grigio, and out of Marlborough, New Zealand, we have the Sauvignon Blanc. Both are fruity, although the Sauvignon Blanc lean more tropical. And lastly, the Prosecco, like the Pinot Grigio, hails from Italy: Made in Treviso, it uses Glera grapes and has notes of bananas, peaches, and golden delicious apples. All five of the wines start at a price point of $6.99, although the exact cost per bottle varies depending on the type of wine. (According to Delish, the reds both start cheaper; they hit the $6.99 and up price point, while the whites and prosecco start at $7.99.)

It’s not clear whether it’s intentional or not, but the new Wellsley Farm wines appear to be a direct competitor for Target’s recently-launched “The Collection” wines. Aesthetically, they even look similar, with modern label designs full of distinct colors. The Collection’s designs are a bit more abstract, featuring blobs and brush strokes, while the Wellsley Farms designs each center around concrete yet artistic representations of feathers — but the similarities are hard to miss.

Of course, each line has their pros and cons; BJ’s wines are a few bucks less expensive (The Collection offerings are all about $10 per bottle), for example, while Target’s are more accessible (no need for a store membership to shop them; also, BJ’s only serves the East Coast and parts of Ohio, while Target operates nationally). But together, they represent a clear trend: Affordable wines to suit a variety of palates, attractively packaged and probably aimed at millennials. And that, I would argue, is a fine trend to follow.

Grab the new Wellsley Farms wines at your friendly neighborhood BJ’s To check whether your location has a wine and beer department, look it up with the Club Locator here. Cheers!