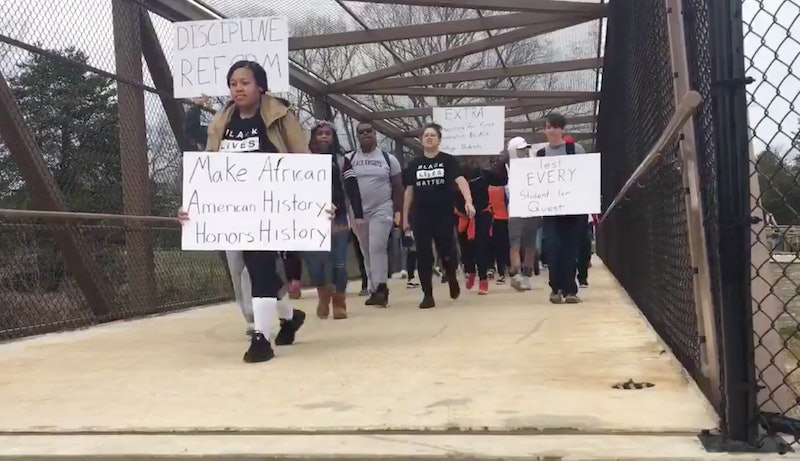 Days after a racist online threat caused schools in Charlottesville, Virginia to close for two days, students used the incident as an opportunity to call for a renewed fight against institutionalized bias. Charlottesville's Black Student Union (BSU) held a walkout on Monday and demanded a series of reforms within the city school district.

The walkout took place at Charlottesville High School and was spearheaded by the BSU and student activist Zyahna Bryant, per HuffPost. At least 35 students left class at 12 p.m. and walked through the city, according to C-VILLE Weekly, which tweeted live updates of the protest. They gathered at McIntire Park, marched across a bridge, and stood by a highway while chanting and holding signs.

Students also shared their list of demands at the beginning of the event. "The students of Charlottesville High School are calling on the Charlottesville City Schools to address racism in all its forms," the demands begin, per a press release from the BSU. They suggest 10 reforms, including: hiring more black teachers in upper-level classes; implementing mandatory racial bias training for school resource officers; and creating a diverse group of students, parents, and administrators to oversee the school's disciplinary practices and ensure they are racially equitable.

This safety concern comes days after a racist online threat rocked the district. A message posted on 4chan on Wednesday reportedly warned that the author planned to conduct "an ethnic cleansing" against Charlottesville High School's black and brown students and instructed white students to stay home, per The Richmond Times Dispatch. The city's police chief confirmed on Friday that the message used "vile, racially-charged language which targeted African American and Hispanic students."

Schools in Charlottesville closed on both Thursday and Friday in response to the threat. Police investigators traced the message to a 17-year-old who lives in Albemarle County, Virginia, according to NBC News. The outlet reported that the suspect has now been arrested and charged.

The threat spurred the organization of Monday's walkout. Both students and other allies gathered in McIntire Park, and the size of the crowd apparently snowballed shortly after the event began; one observer from the Charlottesville Democratic Socialists of America guessed that as many as 200 people were ultimately in attendance. She also tweeted that the "crowd size remained steady" throughout the event, which lasted for about an hour and a half. C-VILLE Weekly estimated that the crowd reached a size of more like 100 people.

Last week's online incident is hardly the first time that Charlottesville has been an epicenter of racial tension in recent years. In August of 2017, a group of white supremacists descended on the city and held a "Unite the Right" rally. One white nationalist drove a car into a crowd of counter-protesters and killed a 32-year-old woman named Heather Heyer.

The walkout planned by the Charlottesville BSU is an attempt to address how racial bias in the city affects its public schools. "There can be no reconciliation without redistribution of resources for black and brown students," event organizer Zyahna Bryant told HuffPost on Monday.

Correction: A previous version of this story incorrectly identified where the 17-year-old suspect lived. It has been updated.