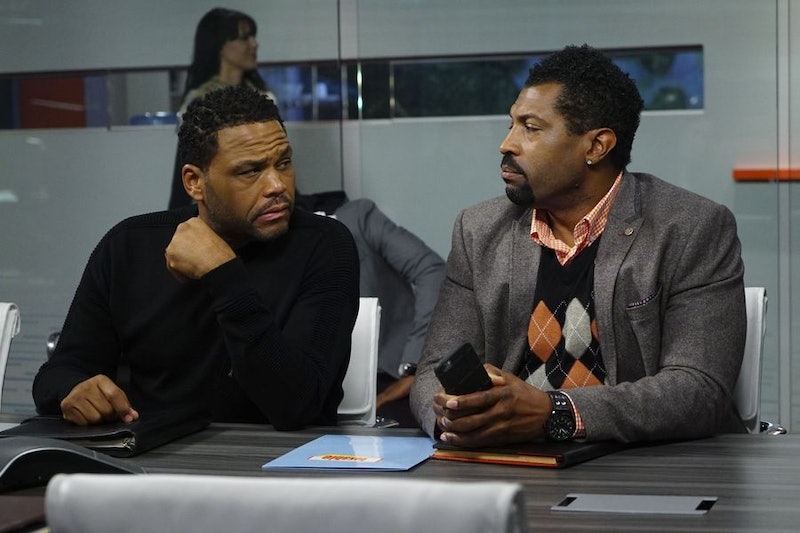 Usually, television provides an escape from the news, but some series are so great that they can make commentary on current events feel as cathartic as escapism. Therefore, black-ish's 2016 election episode already feels like it enters the pantheon of the show's best episodes, alongside Season 2's "Hope," and it even ends on a similar note of optimism. The same way a TV sitcom didn't or couldn't end police brutality, how the characters cope with the election of Donald Trump doesn't change the results of the election, but it does help to hear that these lovable characters are at as much of a loss as everyone else who either supported Hillary or are uncomfortable with what a Trump presidency might mean.

The framing device of the office needing to get together and finally start working on a pitch after months of stunned horror and inaction feels a lot like the last two months — even Trump supporters would have to admit that the man's period of being President-elect has felt a bit like entering the Twilight Zone. And while even Dre's uber-white boss didn't vote for Trump, his white female coworker, Lucy, did. And when faced with finally meeting a person face to face who went for his economic message, Dre is no closer to understanding how or why she could make that choice, but he does explain that he's not going to waste his time being shocked when the election of Trump is just the latest in a long series of moments that ignored the concerns for black Americans.

There's a lot of time, care, and even money devoted to this episode, especially considering two different versions of "Strange Fruit" (Nina Simone's original and Kanye West's cover, "Blood on the Leaves"), and footage of Martin Luther King, Jr.'s "I Have a Dream" speech are played. In fact, the speech was used as both a rejection of the idea that all black liberation must be a concession — Junior learns from Pops that the speech is both hopeful and determined.

The rest of the family struggles with how they're going to react in the face of a potentially regressive and destructive four years. While Bow reacts with a bevy of donations, Zoey just wants to make some delicious, non-political lemonade to donate to a progressive march.

At points, it does feel as though the message is layered on thickly, especially when Dre makes sure to add the caveat that no, he doesn't think that every single Trump voter was actively racist, sexist, or xenophobic. Certainly, though, black-ish manages to condense a lot of post-election anxiety and restlessness into another one of its best half-hours. This series is firmly establishing itself as a sitcom that can easily take on important issues.

More like this
'Brookside' Is Coming Back & Soap Opera Fans Are Going Wild
By Sam Ramsden
Twitter Can’t Believe The Madonna Biopic Is Scrapped & Fans Have A Solution
By Alyssa Lapid
Twitter Is Divided Over Madonna’s Controversial 'Vanity Fair' Cover
By Alyssa Lapid
'Friends' Star Maggie Wheeler Offers Support To Matthew Perry After Reading His Memoir
By Alyssa Lapid
Get Even More From Bustle — Sign Up For The Newsletter
From hair trends to relationship advice, our daily newsletter has everything you need to sound like a person who’s on TikTok, even if you aren’t.