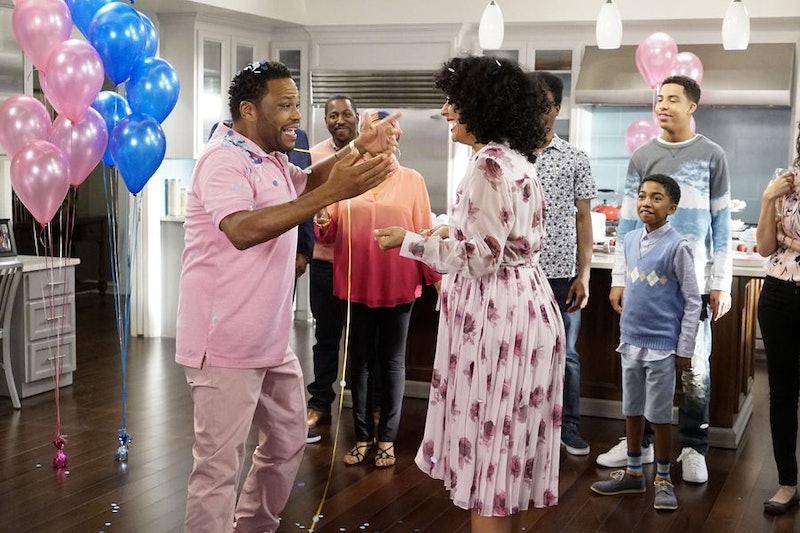 I should have known that black-ish wasn't going to let me down. The show's two-week hiatus felt like it took an eternity, but it picks up with an episode just as good as where it left off. Because the new Johnson baby's gender is revealed, and the simple premise is the jumping off point for another fantastic episode and another fantastic discussion. After finding out the gender of their baby, Dre and Bow begin battling over which they'd prefer. Of course, each parent is biased, immediately thinking that they want a new baby of their own gender. That's probably because the family has decided that Dre gets to pick a boy's name, and Bow gets to pick a girl's, and that's got to be one of the top five reasons to have a kid in the first place (I may not be in the right frame of mind to have a child).

When Dre "wins" the naming contest and the family finds out they're having a new boy, he decides to name his son Devontae, only to have Rainbow, who grew up with an unconventional name and hates it. But Dre argues that he wants his son to have a self-consciously Black name.

Bow and Ruby argue that when a person has a name like Devontae, they'll get their name constantly misspelled and mispronounced by white people, statistically are less likely to get responses when applying to jobs, and will "give away" the fact that he's Black "before he talks on the phone" (Jenifer Lewis' delivery of this line is one of the show's best moment all season long).

But as it turns out, Dre has a real reason behind his seemingly impulsive name choice. "I hate the fact that when something is Black, the world sees it as bad," Dre says. It's not so much about Devontae having serious personal or cultural significance, as it is a small way for this — otherwise remarkably privileged — Black family to fight against the perception that in order to be successful, anything recognizably Black has to be left behind. So, welcome baby Devontae Johnson to black-ish — your siblings might be jealous of you, but you're already an exciting addition to the family.