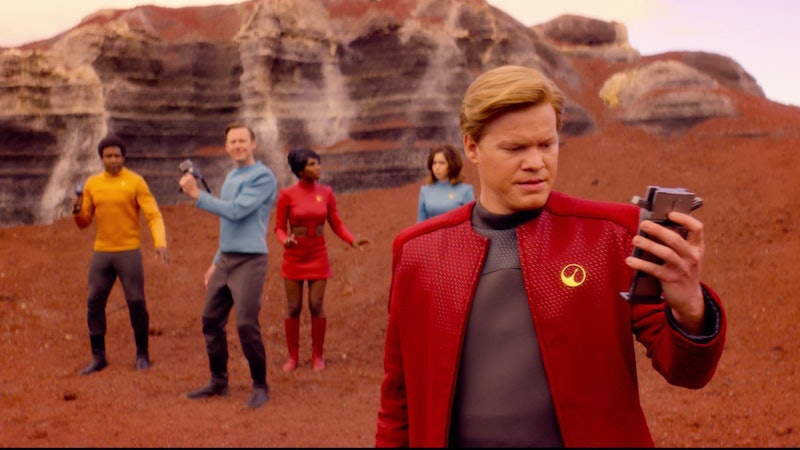 Spoilers ahead for the Black Mirror Season 4 Episode "U.S.S. Callister."

The best episodes in Black Mirror’s inconsistent canon are the ones that can’t be boiled down to a single folksy lesson about the evils of technology. They’re the ones about how technology has the ability to exacerbate our human failings — failings that are much more thorny and harmful than a simple decision to push a button or download an app. To that end, the standout of Black Mirror Season 4 is “U.S.S. Callister,” a rollicking space adventure and futuristic thriller that not only deftly satirizes toxic male “geek” entitlement but also showcases the emotional labor women who participate in geek culture have to take on and the humiliation they endure just to survive it.

In “U.S.S. Callister,” Jesse Plemons plays Robert Daley, a brilliant coder whose submissive personality is no match for that of his cocksure business partner James Walton, played by Westworld’s Jimmi Simpson. In order to make up for the emasculation he’s subject to at work, Daley has constructed a fantasy world inspired by his favorite show, the Star Trek-inspired Space Fleet, which he can plug into on his own time. In that reality, he’s the captain of a crew composed of his coworkers. He’s virile and respected — a shot-caller with a ‘70s hero cadence that would make William Shatner blush. But this “game” is revealed to be more sadistic than it appears. His crew are not simulations, but rather clones of his colleagues with the same memories and personalities. They retain their free will, too, but Daley will dole out horrific punishments to anyone who refuses to play along. He has essentially enslaved the people who, in his estimation, have neglected to respect him as a man.

Daley’s arc plays right into the myth of the misunderstood genius. Watching the episode for the first time, I initially felt for Daley the coder, who was so overlooked that the intern who gets the coffee is amused to be asked to get one for him. And the introduction of Cristin Milioti’s character, Nanette Cole, hints at a different resolution, one where Daley’s contributions and his value is finally recognized. The plot lulls you into expecting Daley to be the hero of this tale by initially mimicking so many male underdog narratives that have permeated pop culture, from John Cusack’s character in Say Anything to every Judd Apatow protagonist. That trope holds strong in its belief that the meek shall inherit, get the girl, and bring down the bullies, and that their own behavior won’t be judged as harshly as it should be, because that poor guy, he’s such a geek! (See: the unchecked harassment and sexual deviancy of the heroes in every Revenge Of The Nerds movie.) But then you realize that the “recognition” Daley wants from Nanette is sexual interest, which absolutely no one is owed, and that simply being uncool doesn’t automatically make him a good person.

And Daley is definitely not that. The terrifying truth is that Daley doesn’t just want to escape and play captain; he wants to punish those who haven’t given him what he perceives to be his due. And he does this through the lens of a famous sci-fi series, which is something that he feels ownership of.

While William Bridges and Charlie Brooker’s script calls to mind real-life harassment cases and the recent epidemic of online abuse without explicitly referencing any of those incidents, women who have waded into these spaces — technology, geekdom — won’t have any trouble identifying the target of this episode’s moralizing. “U.S.S. Callister” is primarily concerned with gatekeeping, a term that describes attempts to decide who does and who does not deserve access to a property or a community. In action, it can be as seemingly insignificant as a tweet that derides “casual fans” who don’t know the entire history of Marvel comics yet dare to enjoy the blockbuster Hollywood movies they inspire; as visible as populating entire convention panels with just white men, so that their voices are prioritized; or as vitriolic as sending hate and abuse to women and minorities who consider themselves a part of a community.

Like so many women who are fans of sci-fi, I’ve witnessed plenty of gatekeeping firsthand: Once, after attending and participating in a sci-fi fan convention for a few years, I learned that a friend’s ex had told people before my female friends and I even arrived that we were silly and stupid, and certainly not as serious about the material as everyone else. Before we even stepped into the room, we were required to prove ourselves beyond the skepticism that any other newbie would encounter. Gatekeeping says “this is mine, not yours.”

It would be difficult to ignore the connections between “U.S.S. Callister” and Gamergate, an ongoing online battle that The Washington Post traces back to 2013 and game designer Zoe Quinn’s free game, Depression Quest. As discussions about the merits and creativity of the avant-garde work were ignited, an ex-boyfriend of Quinn’s posted to a blog, claiming she had cheated on him with men in the industry, thereby implying that she traded sexual favors for coverage and contacts. The ire that the post inspired in male gamers who felt that women like Quinn don’t belong in the community or have any business being successful in the business blew up, taking shape in trolling, rape and death threats, and doxxing (posting the private contact info and whereabouts of someone in retaliation for online activity) of women gamers, developers, and journalists. Some women, like developer Brianna Wu, had to flee their homes in fear for their safety, per WaPo.

“Actually, it’s about ethics in games journalism” is a meme used to poke fun at the ridiculous rationalizations offered by members of the Gamergate “movement,” which is widely regarded as just straight-up bullying, and not social justice progress of any stripe. And you can imagine Robert Daley using similar justification to account for why he’s torturing his co-workers in this way.

Sure, maybe some of them, especially Walton, are jerks and maybe deserve to be told so. But the punishment that Daley doles out far outweighs the crime. Daley has been telling himself a story for years — that he is the oppressed loner who has to prevail. And to him, every one of his actions is merited, no matter how far he goes. But he goes pretty far: Perhaps his most vicious move is to hold a sample of Walton’s son’s DNA hostage, in case he has to murder another clone of the child in front of his nemesis again to make sure he’ll continue complying with his commands.

As more and more accusations are made public about powerful men and their patterns of sexual harassment and sexual violence, male entitlement has to remain a part of the conversation. The alleged perpetrators believe not only that they are owed sex and affection, but also deference. In its most common, everyday form, it’s called the “friendzone” — the concept that women injure the men who are nice to them or buy them things by neglecting to provide sexual gratification. “Friendzone” complaints make women a part of a transaction that they have not agreed to, and often, they’re punished for simply making a personal choice. (The New Yorker short story Cat Person by Kristen Roupenian that recently went viral is a great fictionalized primer on this, which, surprise, infuriated some men online.) When Nanette tells Daley that she is an admirer of his career and is looking forward to working with him, she is by no means promising to sleep with him, but it’s him overhearing her tell another colleague that her interest is purely professional that prompts Daley to send her into the simulation. She wouldn’t f*ck him, so now she has to pay.

And on the Space Fleet ship, the women must be sexy. They’re all wearing tight, mod uniforms and are required to dramatically kiss Daley whenever he does something heroic. But in another demonstration of Daley’s desperate need for control, they also don’t have any genitals or even nerve endings down there, and that goes for the men, too. The female crew are there for Daley’s pleasure and not for anyone else’s, including their own. They’re titillating but pure; a satire of the male gaze.

When Nanette and the rest of the Space Fleet crew realize that they can make contact with their actual selves in the real world, they’re forced to determine how, exactly, they can plausibly compel them to help. Because of the culture of the internet and the way in which it can stoke and facilitate male entitlement, Nanette is terrified of her private content being stolen. But this fear enables her and the rest of the crew to get out from under the thumb of their oppressor and the toxic masculinity that guides his actions. In a painfully self-aware move, the cloned Nanette realizes that her best chance to get real Nanette to comply is through blackmailing her real self with boudoir photos that she has on her phone. Then, to carry out the scheme, clone Nanette has to sexually tempt Daley to buy time. Tragically and ironically, Nanette has to hack and humiliate herself in order to escape the simulation, in a funhouse-mirror version of several privacy violations that have made it into the news over the past few years.

This type of negotiation happens everywhere, but it’s felt especially acutely in geek spaces. And while people of all personalities participate, there is a subset of men who lead with their entitlement. For as long as I’ve been around geek culture, I’ve dealt with unwanted hugs and touching, men speaking over women or restating their opinions in panels, intimidation, and skepticism over complaints about harassment. A “whisper network” of women tells you who to avoid and who to “just be nice” to, so you won’t be on their radar. And even the “good guys” have been surprised to learn just how much of this their female friends go through and everything they do (text check-ins, pouring their own drinks) to keep themselves safe. It’s not possible to let your guard down and just enjoy, but sadly, we’ve become so used to that.