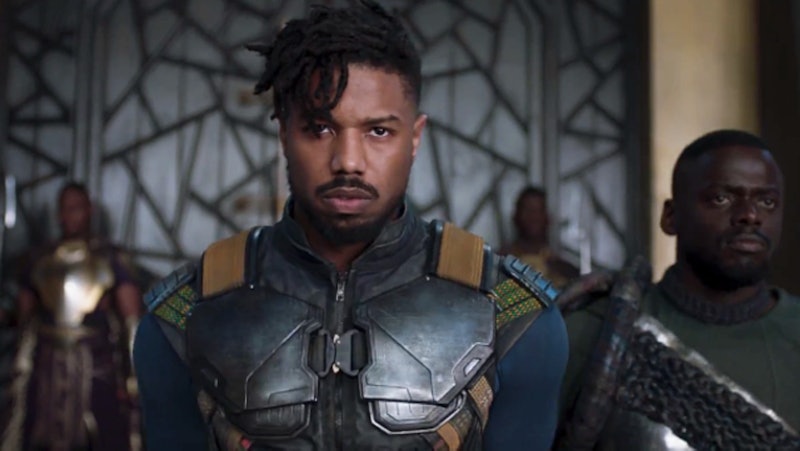 Over the course of his career, Michael B. Jordan has played everything from a troubled football player to an up-and-coming boxer, but no matter how different the roles have been, one thing's always been the same: you can't help but root for him. The actor is so freakin' charismatic that even when his characters make seriously big mistakes, you still want him to succeed no matter what. Jordan's latest role, though, might put that truism to the test — after all, he's playing an actual villain, a vengeful soldier called Killmonger, in Marvel's Black Panther. But despite this Big Bad wanting to take down T'Challa by whatever means necessary, Jordan swears that fans will still find themselves happily cheering his character on.

"I think one of the challenges for us, if we do our jobs the right ways, is hopefully [making] Killmonger somebody you guys can root for, too," says the actor when he sits down with reporters on the Atlanta set of Black Panther. "Hopefully a lot of people, when they see the film, they’re able to connect with [him]."

Sporting his character's dreadlocks and covering up his costume as much as possible (this is one secretive movie, after all), Jordan adds that he understands Killmonger well, but he can't give too much detail as to why.

"There are two sides to every coin and true villains, I think the really good ones and the interesting ones, the watchable ones, truly believe what they’re doing is the right thing," Jordan says slowly, careful not to say too much. "And if you can somehow blur that line for the people who we’re supposed to not like... if you can kind of get [audiences] to see that other point of view, I think the battle’s won."

Not much is known about Killmonger's full story in Black Panther, except that he's an exile from Wakanda who, after becoming a black-ops soldier in America, wants to overthrow T'Challa (Chadwick Boseman) and run his country in a very different way. But Jordan calls him a "revolutionary," and says that he's something of an outsider to the rest of the characters.

"It’s interesting because I’m not really associated with any of the Wakandans," the actor says, adding that the fact that he came on set midway through production helped get him into Killmonger's mindset, since the villain comes back to Wakanda after much time away spent watching T'Challa run the country. "He’s very patient. He’s a thinker. He’s really good at chess, and he was waiting for his perfect time to pop up."

It's safe to say that when Killmonger does pop up, T'Challa and his allies will be in for a major surprise — not to mention some pretty intense fights. Jordan trained intensely for the role, preparing for battles featuring both weapons and hand-to-hand combat. No stranger to fight scenes (Creed, anyone?), the actor was more than ready to take on the challenge for Black Panther, a movie he says has its fair share of "martial arts"-inspired sequences. After all, Jordan is a huge fan of Black Panther director Ryan Coogler and comic book movies overall. "I’m a geek, I love this world," he says with a grin. "I love being able to play in that fantastic kind of space."

And after Fantastic Four, his first comic book movie that, to put it gently, didn't do so hot, Jordan says he looked at Black Panther, out Feb. 16, as "another shot to get it right." With fans already freaking out with excitement over the movie, it sounds like Jordan can definitely rest easy.