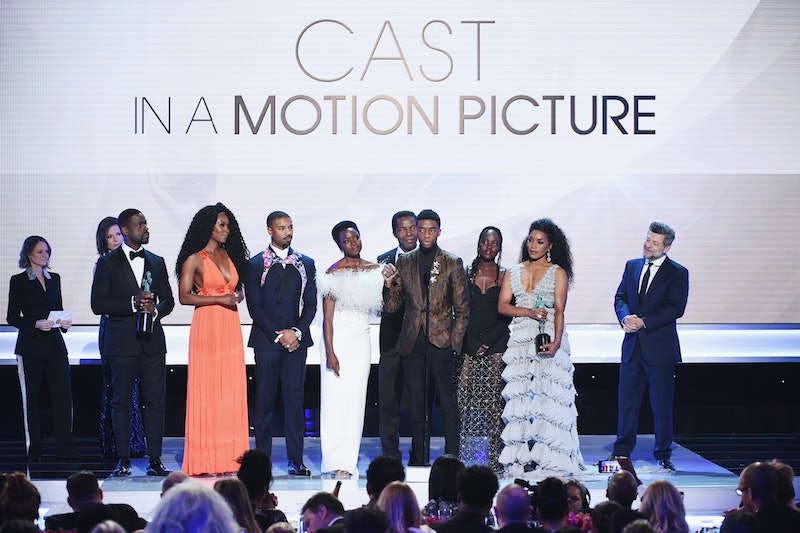 At the end of a mostly predictable ceremony, the SAG Awards saved its most exciting news for last. Black Panther won the SAG Award for Best Ensemble, and now people are putting it at the front of the running for the coveted Best Picture Academy Award.

The cast couldn't contain their excitement when the film's name was announced for the win. Jumping with joy, they embraced one another in immediate celebration of such an iconic acknowledgement. Chadwick Boseman, who plays protagonist T'Challa, stepped up to the mic on behalf of them all. He was so shocked that, at first, he didn't know what to say.

"I didn’t think I was gonna have to speak," he laughed. He then quickly made it his mission to fully take advantage of the winning platform. He went through his list of honorable mentions and thanks, including one dedicated to the film's director, Ryan Coogler, who remained seated in the audience. Boseman's co-stars chimed in to make sure he didn't forget anyone who led them to that stage.

Then, he put this win for Black Panther in greater context of the progress within Hollywood, adding that the film has changed the way the industry "sees us," referring to its predominantly black cast.

"We all know what it's like to be told there is not a place for you to be featured," he said. "We know what it's like to be the tail and not the head." He went on to reiterate that Black Panther created a world in which people like him and his cast mates can be "the head instead of the tail," in which they were able to "create a world that exemplified a world [they] wanted to see." When he paused for reflection, his peers in the crowd erupted in applause. "That is something that I wish all actors would get the opportunity to experience," he said.

The Best Ensemble award wasn't the film's first win of the night. The Black Panther stunt crew also took home the award for Outstanding Action Performances by Film and Television Stunt Ensembles, though the win was announced during the pre-show rather than the official telecast.

Black Panther fans were overjoyed with the win, and some are sure that it means a Best Picture Oscar is in its future. One Twitter user called the SAG Award win "the equivalent of Best Picture."

Others were moved by the Screen Actors Guild's growing respect for stories created and produced by Marvel Studios, not many of which are widely recognized during awards season. "Black Panther won the most prestigious award ever given to a comic book film, because their PEERS made it so," one user tweeted. "That's very special."

According to Reuters, in the last 23 years, only one movie was awarded Best Picture without at least receiving a nomination for the SAG Best Ensemble award, that movie being last year's Best Picture winner, The Shape of Water.

Black Panther is nominated alongside some of the same films it was up against for the SAG Award. There's no reason it can't beat them twice, right? Its fate will be revealed on Feb. 24 during the Academy Awards, which air live at 8 p.m. ET.