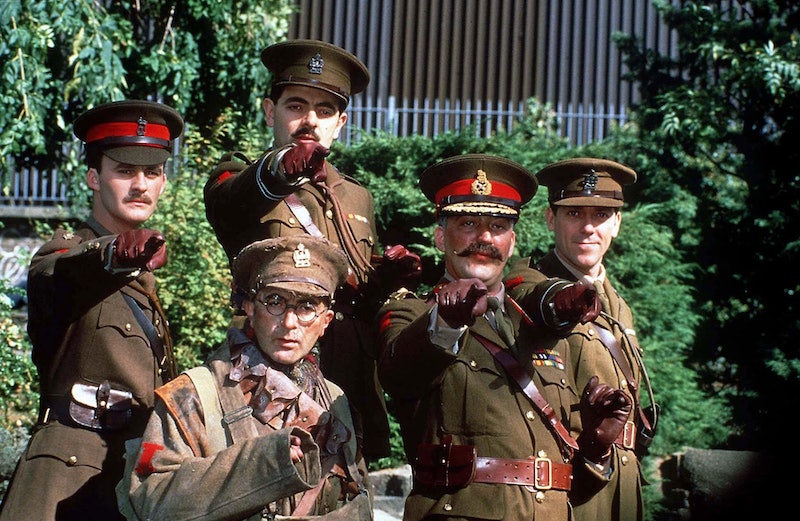 It has been speculated about for a while now, as fans of the iconic TV show Blackadder have been mourning the show's absence from BBC Two's schedule for well over a decade. But mourn no more because reports suggest Blackadder could return for a one off special, and I couldn't be more excited. Richard Curtis' cult history comedy has been a long time favourite for many, and with a new material on the way, you'll finally be able to update your list of catchphrases and epic one liners.

As he told the Daily Star on Tuesday, June 25, Curtis is desperate to have one more go with Blackadder, but this time, there's going to be a little bit of a shakeup to the show's dynamic. "The thing about Blackadder was, it was a young man’s show criticising older people, saying how stupid those in authority were," the Notting Hill director said, adding: “So I did once think: ‘If we ever did anything again, it should be Blackadder as a teacher in a university, about how much we hate young people!'"

While it might not strictly be a televised episode, Curtis is thinking instead of staged performance. "I’m always hoping Rowan and I will do one last live show and bring on Blackadder for a 10-minute bit,” he said. But it's not like he only envisions a one man Blackadder play, with Atkinson getting the honours. Just like its fans, Curtis wants to get the whole Blackadder gang back together again. “Getting Rowan and Tony Robinson on stage together again would be gorgeous.” Wouldn't it just, Curtis. Wouldn't it just.

I reckon comedian Tony Robinson, who played Baldrick, would be well up for it. After all, it wasn't so long ago that he told The Sun: "I do see a show coming back." Speaking to the paper on Sept. 27, 2018, Robinson said that while Blackadder's return would mean somehow getting a bunch of high profile actors back together again, he's confident that it can be pulled off. "I know everyone is busy doing wonderful things, but we all have fond memories so I’m sure we would work it out."

In Blackadder's four series, the show has taken its viewers back in time to the Middle Ages, Elizabeth England, the Georgian era, and World War I, so there's still plenty of scope left to cover if Blackadder's return really does get to come into fruition. "There are a host of other periods in history which could be turned into a six-part Blackadder series," according to Robinson, and that's not even taking into account the present day. Who wouldn't want to see a Blackadder take on the era of Trump and Brexit?

So, until any further news may or may not be revealed, you can always go ahead and revisit some of your favourite moments in comedy history by heading to YouTube and streaming Blackadder there. With episodes at £1.99, it's not a bad price to pay for an excellent evening in.