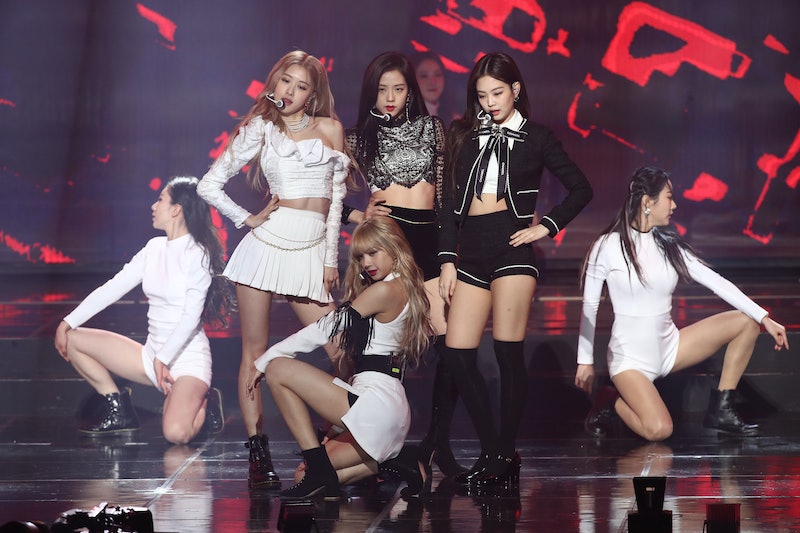 American audiences have always loved musicians from abroad. The mid-1960s ushered in what is known as the "British Invasion" due to the outrageous popularity of U.K. bands like The Beatles and The Rolling Stones, and now audiences are reacting with similar fanfare at the arrival of K-Pop. Need proof? The all female K-Pop group, BLACKPINK announced their first U.S. tour during their U.S. television debut on Feb. 11. The group of four stunned audiences on The Late Show with Stephen Colbert with their on-point choreography while performing the song "Ddu-du Ddu-du" just one day after the immensely popular K-Pop group BTS made history as the first K-Pop group ever to present an award at the Grammys on Sunday.

BLACKPINK's first U.S. television appearance is definitely worth celebrating on its own. According to Billboard, this was only the second time that a K-Pop girl group performed on late night TV — the first time being Girls' Generation's 2012 performance on Late Show with David Letterman. The girl group didn't stop there, though, because on Tuesday morning, BLACKPINK performed again on Good Morning America.

After watching these two TV performances, you'll probably be sold on joining the millions around the world who enjoy BLACKPINK fandom, known as "Blinks." The group's U.S. tour will take place throughout April, 2019, and it will hit Los Angeles, Newark, Chicago, and more. Tickets go on sale on Feb. 20, and you might want to act fast after this viral late-night performance.

The members of BLACKPINK, Jisoo, Jennie, Lisa, and Rosé, have had plans to perform in the U.S. for a while. It was previously announced that they would be performing at Coachella 2019 for both of the California music festival's weekends, which happens to make BLACKPINK the first K-pop girl group to perform at the festival, per TIME.

It turns out, trailblazing is kind of BLACKPINK's thing thanks to their astronomical popularity. According to Billboard, "DDU-DU DDU-DU" debuted as the "highest-charting hit ever by a K-pop girl group on the Billboard Hot 100," last June. The song opened at number 55 on the U.S. charts, which was almost twenty spots higher than the past record holder, Wonder Girls, whose 2009 song "Nobody" debuted and peaked at number 76.

As you can tell by the Twitter reactions to BLACKPINK's two show-stopping U.S. TV performances, fans can't get enough of the energetic, poppy, girl-power vibe that the K-poppers exude.

Many Blinks even waited outside to see BLACKPINK leaving or entering The Late Show studios to catch a glimpse of the stars, a phenomenon Late Show guest, John Oliver, later recounted during his interview. "There are some very excitable K-Pop fans outside," Oliver said. "Oh man, you have never truly heard disappointment until you pull up in a large black car, hear the screams of excitable K-Pop fans, get out not as a member of a K-pop band, and hear 'Ahhhh...no.'" It seems there isn't much overlap between Blinks and fans of Oliver's HBO show Last Week Tonight.

It seems safe to say that BLACKPINK has officially arrived in the U.S., and it likely wouldn't shock anyone if the tickets to the group's upcoming tour here sell out in mere seconds. News of their 2019 In Your Area tour has definitely delighted the American Blinks, and it's only a matter of time that the fandom grows even bigger.