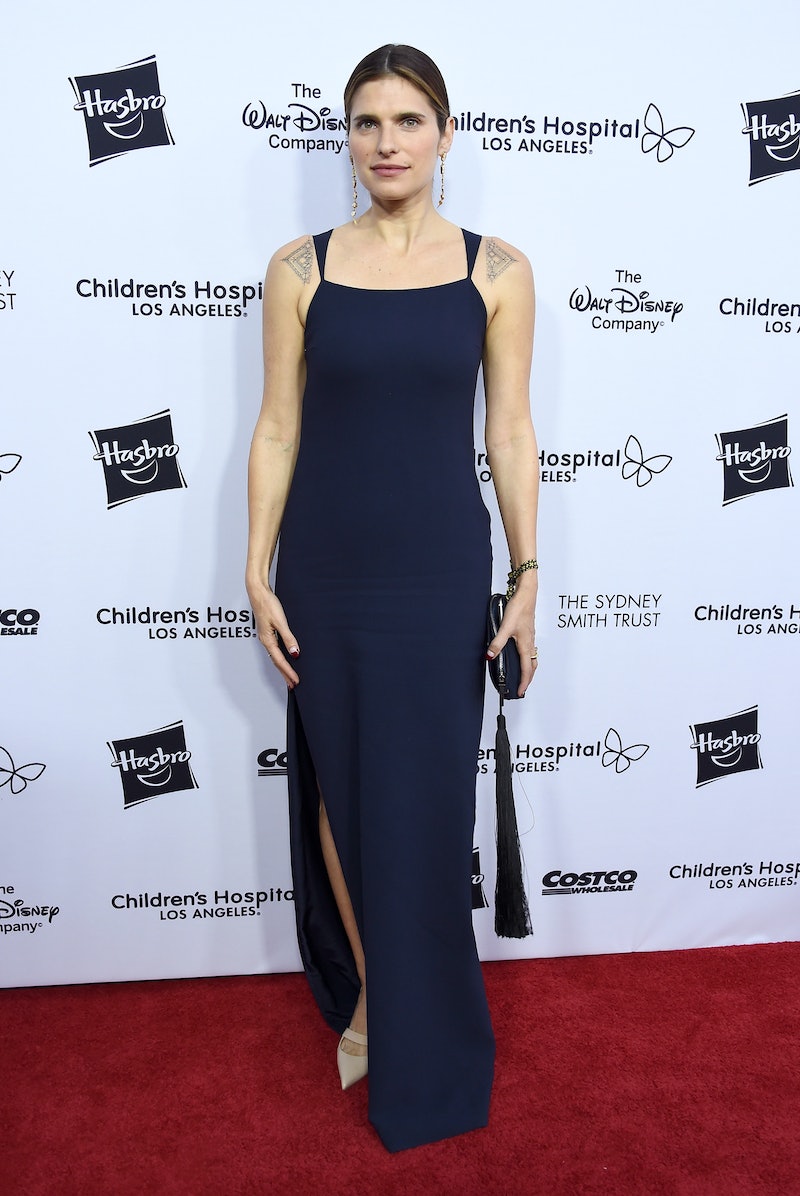 Although she's starred in network dramas like Boston Legal and studio films like No Strings Attached, when it comes to her own projects, Lake Bell is used to being in charge. She's produced, written, directed, and starred in almost all of her independent film projects, and as is the nature of indie projects, that meant she had final say in almost everything. Bell is taking on all of the same roles on her new network sitcom Bless This Mess — she also stars alongside Dax Shepard — but in order to bring her latest endeavor to the masses, she had to let go of a little creative control. Working on Bless This Mess with New Girl's Liz Meriwether has truly been a collaboration, because as she's learned, making a network sitcom for a mainstream audience involves making plenty of compromises and levels and levels of approvals.

Realizing that she didn't have to take on every single role behind the scenes or do it all — something Bell successfully built her career upon in the independent film world — was a lesson she was happy to learn. Eventually. For creatives, or for anyone really, changing up a well-worn routine and technique can feel devastating at first.

"I sort of had many, many rude awakenings of how the creative process functions in TV versus independent film," Bell says with a chuckle. "In independent movies, if I wrote it and directed it, that means I am the only person that you would have to ask for any creative questions or decisions. With TV, there's about 50. You share creative control with a myriad of other creative comrades — it's a completely different beast. And that adjustment was my largest learning curve."

With TV, the studio and the network have a say — plus, as Deadline reported, Bless This Mess ended up being a co-production between 20th Century Fox TV and ABC Studios — which wasn't an easy shift for Bell. "At each stage of the writing, whether it's the outline or the pilot or just a pitch for a story, all of it has to go through those massive levels," Bell says. She said that at first she thought it was "crazy" and wondered how anyone would get anything done. It was a far cry from her being able to have total creative control on her former film projects.

As a self-described type-A personality, it was a new process that definitely took some getting used to. "I'm [an] extremely organized person and I do like things a certain way," she says, "I thrive on that." But even though she's wearing most of the hats on Bless This Mess, she came to respect the "guidelines and limitations" that come with working with major studios and networks — and learned there are benefits to having others there to give input.

"It actually is helpful. Normally, I have everything on my plate," Bell says. But this time, she says, it was nice to have Meriwether be her "writing ears on set," and be able to delegate tasks.

"As long as I can do first and foremost my job as a mom the best that I can while maintaining this very indulgent and creative career, I would feel very lucky."

Although Bell did direct the pilot episode, she says that she won't be in the director's seat for most of Bless This Mess. "I thought, 'You know what: I'm gonna go ahead and be present in the writers room. Be present as an executive producer in the preproduction and postproduction and serve my creative input there. And then, obviously, on camera as one of the stars.' That was my choice," Bell says. "Also, 'cause I'm a mom and I was like, 'I don't think that I want to do all of the things in a series situation.'"

Bell and her husband, artist Scott Campbell, have two children together — 4-year-old daughter Nova and 20-month-old son Ozgood. Although she seemingly cannot stop working ("I am secretly nurturing... an independent project, and then there's like probably like 10 other things that are seedlings," she says), she also is committed to her role as a mom. "As long as I can do first and foremost my job as a mom the best that I can while maintaining this very indulgent and creative career, I would feel very lucky," Bell says.

One thing that motherhood has made her reflect on is the type of entertainment that the younger generation is consuming. "Looking at what my daughter is ingesting, that's where I get fiery and a little tough," Bell says. "I feel like it is up to us to create content for young people — young children in general, boys and girls — that sort of help diversify their understanding of what the future holds. I feel like there's a real problem there."

Although movies and TV can't change all the problems in the world, Bell does believe that creating quality content for people, especially younger audiences, to view can make a difference. And that representation has to happen on and off screen, which is one reason she serves on the board of Women in Film, which works towards ensuring gender and racial quality in the industry.

"The more that the world can be exposed to stories that are diverse, stories that are represented by all genders and all ethnicities, it leads us closer and closer to true parity and to the normalization of that all stories are worth telling and being heard," Bell says. She adds that she feels the industry has a "strong responsibility" to support and reflect "all genders and ethnicities." Sure, movies and TV are meant to entertain, but they can also encourage empathy, Bell says. "Our job is to entertain, to provide escapism, to provide hope through the lens of art and expression and say, 'Hey, you're not alone.'"

As for Bless This Mess, Bell's creation will have a chance to reach a wider audience since it will air on ABC, which is another reason she understands the parameters set by networks. "Independent films are utterly niche. They're the Wild West — you can be anything you want," she says. But with network TV, "Anyone can see it. So any eyeballs — whether young or old or sensitive or insensitive — can see [the show], and so you have to program and write and create for sort of everybody," Bell adds. "I feel lucky to be able to experiment with both."

Even before Bless This Mess, Bell says she has made a pledge to make projects that are kind and make people feel good. With her new ABC show, premiering on April 16, she can continue that commitment — as well as feature more diverse stories — with a larger audience in mind.