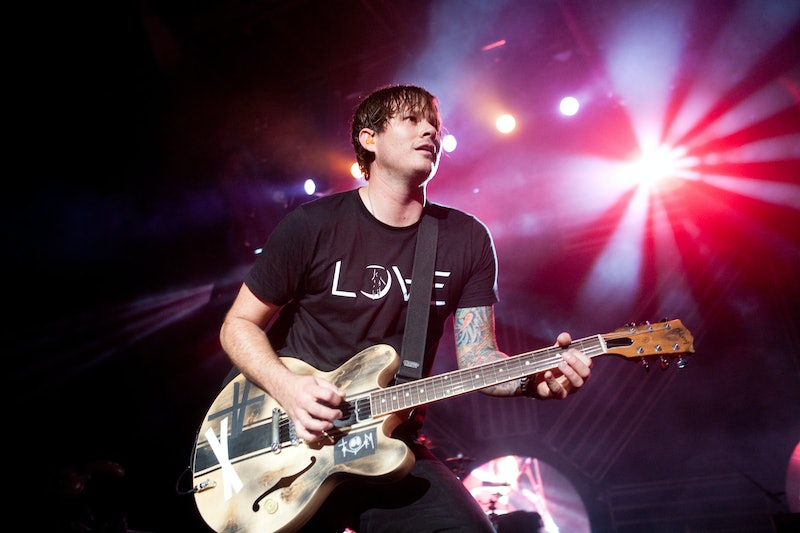 When I first heard that Blink-182's former frontman Tom DeLonge was now involved in a deep study of aliens, my first thought was, “Wait — what?”

Yes, you read that correctly. Tom DeLonge left the pop-punk band permanently in 2015, mainly because he wanted to focus on his first love: a grand unifying theory of alien encounters on Earth. Now, Tom DeLonge has co-authored a book that seeks to explain this theory to the masses.

I have read the book, and I can confirm that it's totally strange.

DeLonge’s co-author in this endeavor is Peter Levenda, a famed occult historian, and the book is called Sekret Machines: Gods: Volume 1 of Gods, Man, & War. (Yes, you read that correctly, and no, I did not misspell “secret.” DeLonge and Levenda explain: "We are using this unusual spelling of secret quite deliberately. For all its street associations it also helps us to distinguish what we mean by secret from the usual interpretations." You know, all those street kids and their slang.)

It should be noted that this, indeed, is just the first volume. It also should not be confused with Sekret Machines Book 1: Chasing Shadows, a fictional thriller companion to this book, which DeLonge co-authored with novelist A.J. Hartley. Both books bill "top government officials" as extensive sources.

There are a lot of sekret machines to keep track of, after all.

I went into this book with a relatively open mind. As a science writer, I didn’t expect to be convinced that aliens have already visited Earth multiple times. To clarify: I’m sure alien life exists, but not necessarily in a form that can fly to Earth and experiment on human. I’m thinking more of the single-celled variety of aliens. However, I was willing to give the book the benefit of the doubt, and I at least hoped I'd be able to read it and think, “Huh, those are some strange coincidences, for sure.”

But in the end, I can’t say I had that reaction to the book.

DeLonge and Levenda state up front that Sekret Machines isn’t intended for skeptics. Instead, the book is aimed at those who are already convinced that beings from another world have visited our own planet. In Sekret Machines, the authors attempt to explain and unify those disparate phenomena, collectively called "The Phenomenon." Perhaps that’s why I found the book so unconvincing. (Also, maybe because at one point, Tom DeLonge quotes his own song lyrics.)

Sekret Machines centers on the "cargo cult" phenomenon, which stems from a World War II incident in which groups of indigenous people in the South Pacific saw supply drops from airplanes and mistakenly believed them to be gods. DeLonge and Levenda argue that the history of human religion is just a giant "cargo cult," and in fact, humans have been deifying alien encounters this whole time. That’s how they explain the similarities that tend to reoccur in different religions and religious narratives, such as the presence of Nephilim and giants in various religions and the ubiquity of human sacrifice.

This, of course, discounts Occam’s razor — the idea that a simple explanation is more likely to be the correct one. No simple explanation involves alien encounters. The Sekret Machines argument that science doesn’t accept an alien presence because we live in a human-centered narrative doesn’t convince me nearly as much as the fact that there is no evidence. Lists of coincidences really aren’t enough to convince my skeptical mind. "Science cannot explain the Phenomenon, so science refuses to see it," DeLonge and Levenda write.

It won't come as much of a shock that I won't be reading the second book in the series. I think I need some time to recover from sentences like: "There is now a growing body of evidence to suggest that the genetic code originated elsewhere than on our planet, and that it was somehow ‘seeded’ onto the Earth."

Really? Evidence? Sadly, the authors make no attempt to explain this claim.

Of course, when the alien overlords descend from on high to rule the Earth, they'll probably come for me first.