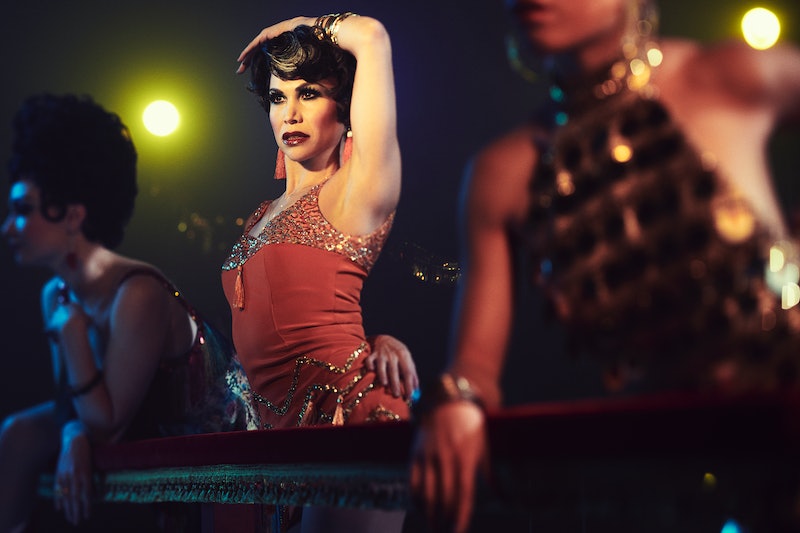 Two movie musicals are the focus of Fosse/Verdon in the premiere episode, which both have the couple's signature stamp but were received differently by audiences and critics alike. It's here, in the middle of a complicated creative partnership, that the show takes its first step. Fosse's failure with Sweet Charity on Fosse/Verdon begins the series on a turning point for these two characters in both their professional careers and relationship leading to Cabaret.

Sweet Charity was Fosse's feature film directorial debut. He had conceived, directed, and choreographed Sweet Charity on Broadway, with Verdon starring as Charity. When it came to the movie, however, Verdon took a backstage (and uncredited) role as an assistant choreographer and creative consultant. Shirley MacLaine played the role Verdon originated. While Sweet Charity is about a dance escort — known as "taxi dancers" back in the day — in a seedy club, it's ultimately a bit too bubbly and optimistic — something that doesn't sit well with Fosse in the episode and is reflected in the reviews.

Yes, the reviews of Sweet Charity really were that bad IRL. You can actually read the New York Times review of Sweet Charity in the archive and the line that Fosse quotes is really there. "A movie haunted by the presence of an unseen star, Gwen Verdon," it reads, "who originated the title role in the Broadway show that was specifically designed for her."

The Times review gets even more damning, praising Fosse's fantastical staging of the show on Broadway while calling the movie adaptation "enlarged and so inflated that it has become another maximal movie: a long, noisy and, finally, dim imitation of its source material." That said, Gwen was right, Variety loved it.

So, propelled by this failure, Fosse goes on to direct the movie adaptation of Cabaret — which starred Liza Minnelli as Sally Bowles. Spoilers for Fosse/Verdon, but Cabaret won eight Academy Awards, including Best Director and Best Actress for Minnelli.

Towards the end of the episode, Gwen explains to the Cabaret producer why a musical about the rise of Nazi Germany was not only the right decision for Fosse, but necessary, especially after his fairy tale had failed. "Kids in the jungle are being zipped into body bags on the evening news," she says. "Richard Nixon is our president, God help us. People aren't going to the movies to escape anymore. They're going to find something true."

What's evident in the first episode of the limited series is how well Fosse and Verdon work together. The way they finish each others' sentences and inform one another's creative decisions is as seductive as the choreography itself. They're codependent, for better and for worse.

Because the other failure that becomes an elephant in the room is Fosse and Verdon's romantic relationship and marriage. Gwen can "speak Bob," she says, which unfortunately also means she's well aware of her husband's infidelity, and treading it like a tightrope in order to maintain her own autonomy and creative freedom. Even when she asks if Liza Minnelli "can act," it seems as though she's really asking her husband what his intentions are with his new leading lady. The two of them have their own language for this, as well.

Fosse's career took off after Cabaret. While he missed the Grammy needed to EGOT, he won the other three awards all in 1973. Even Sweet Charity, or at least several of the dance numbers, is better regarded in retrospect of his later success. Heck, the "Rich Man Frug" from Sweet Charity can be heard in a 2019 Apple commercial. Hopefully, Fosse/Verdon can shed light on the Verdon's role in all of this. If this show can help it, she won't be "an unseen star" haunting Fosse's legacy anymore.

More like this
Kimberly J. Brown & Daniel Kountz Looked Back On Their ‘Halloweentown’ Romance
By Stephanie Topacio Long
All The Sneaky Lindsay Lohan Movie Easter Eggs In Her New Ad, Explained
By Stephanie Topacio Long
'Friends' Creator Marta Kauffman Opened Up About Misgendering A Guest Character
By Grace Wehniainen
Jesse Tyler Ferguson Had A Funny Run-In With A Fellow ‘Modern Family’ Alum
By Grace Wehniainen
Get Even More From Bustle — Sign Up For The Newsletter