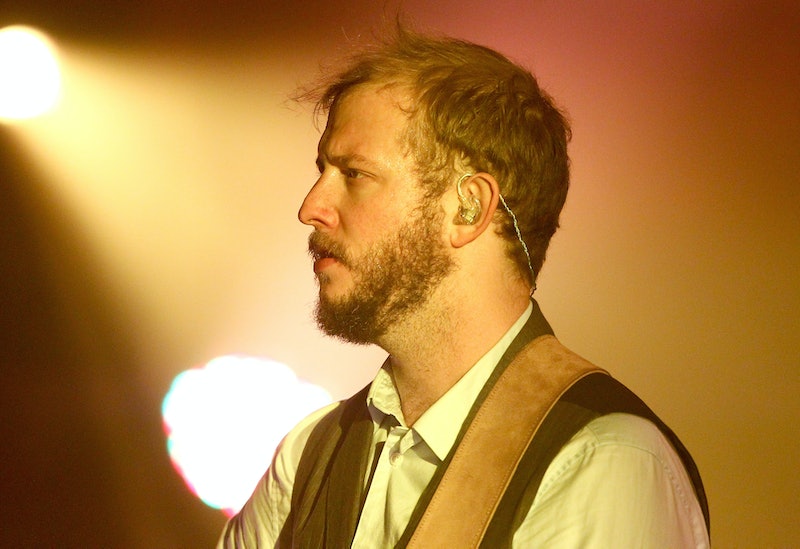 There's a universality to Bon Iver's music that's always made it seem timeless — a yearning for the past but an aching that feels present. The sound is raw and viscerally intimate, but the lyricism is opaque, easily transferred to many moments, emotions, and eras. One of the most enduring examples is Bon Iver's "Blood Bank," the title track of the band's brief but defining 2009 EP. What is, at surface level, a wistful eulogy to a relationship since past, has 10 years later become an unlikely ode to millennials' fears of opening up to one another.

Written during frontman Justin Vernon's fabled retreat to a remote cabin for For Emma, Forever Ago but held because it didn't "fit the story," "Blood Bank" shares the same fragility and longing present on his storied debut, but in a different context. It's not about lost love, but falling into it anew, from a charged first meeting to a tender roadside kiss.

Vernon told NPR it was a fictional love story, a rumination on the magic of an undefinable bond. "I think that that secret [in the chorus] is the answer to all those questions," he said. "Why is this sacred and why does this feel larger than myself and larger than what I can even put into words ... I think it's the connection that we have to each other."

But while "Blood Bank" is, lyrically, one of Vernon's least ambiguous efforts, his work has long been more concerned with the way words sound than what they symbolize; as Stephen Deusner wrote for Stereogum, it's as though Vernon is "trying to find new ways to be a confessional songwriter. [He's] calibrating language to give just enough away and to stop short of overindulging or oversharing." It's apt, then, that "Blood Bank" can be interpreted with a similar sense of constraint. Perhaps the couple's "secret" is not the feelings they can't put into words, but those that they are too afraid to.

It's a theme that speaks profoundly to the millennial dating climate, in which emotions are shared openly and unashamedly online, and yet stifled in private. It's why this generation has been labeled one that "can't communicate": amid a culture demarcated by Facetune and ghosting and indefinite situationships, being vulnerable has become paralyzing.

The more you listen to "Blood Bank," the more attuned the song seems to 2019. Meeting someone at a blood bank is exactly the kind of quirky meet-cute you could envision in, say, a Girls episode; its somber, stripped-back tonality resembles the sad hip-hop suddenly inundating the Top 40; and the line "ain't this just like the present, to be showing up like this" may as well be a Jaden Smith tweet. Vernon's confounding poeticism feels like the musical embodiment of mixed signals: "It f*cks with your honor, it teases your head."

There's also an inherent passivity — a chance meeting, a fleeting hookup — that evokes the nonchalance of modern dating. It's clear the couple Vernon sings of is in love, even envisioning a future ("What's that noise up the stairs babe? Is that Christmas morning creaks?"), but their inability to say so traps them in a perpetual limbo — one not unlike the nebulous something-or-others so popular in present day.

And it's palpable in the instrumentation, too. "Blood Bank" starts slow and plodding, but tense; you can feel the anticipation, there's a tightening in your chest. The electric guitar is a marked departure from Vernon's preferred acoustics, a subtle but jolting energy that mirrors the spark of a new crush. When he reaches the chorus, though, the song halts to a near-standstill, a weighted almost-silence much like those three unspoken words. And by the time the track arrives at its final verse, it's descended into a beautiful cacophony — either a chaotic end to a combustive romance, or a cathartic unleashing of those elusive "I love yous."

In the 10 years since its release, "Blood Bank" has been interpreted several times over: as a sorrowful remembrance of an unplanned pregnancy, a bittersweet reflection on a soured affair. But it's this that feels most resonant — representative of a time that shaped many of its early listeners, yet still evocative of their present. "Blood Bank" is a song that not only enraptured a generation, but has grown with them, too.

More like this
The Bachelor’s Christina Mandrell Comes From One Of Country Music’s Most Famous Families
By Brad Witter
Linda Ronstadt’s “Long Long Time” Plays A Pivotal Role In The Last Of Us
By Brad Witter
Selena Gomez Confirms She's Single Amid Drew Taggart Dating Rumors
By Martha Sorren, Jake Viswanath and Jack Irvin
Nicole & Chris Hinted They’re Still Together After 'Married At First Sight'
By Brad Witter
Get Even More From Bustle — Sign Up For The Newsletter
From hair trends to relationship advice, our daily newsletter has everything you need to sound like a person who’s on TikTok, even if you aren’t.