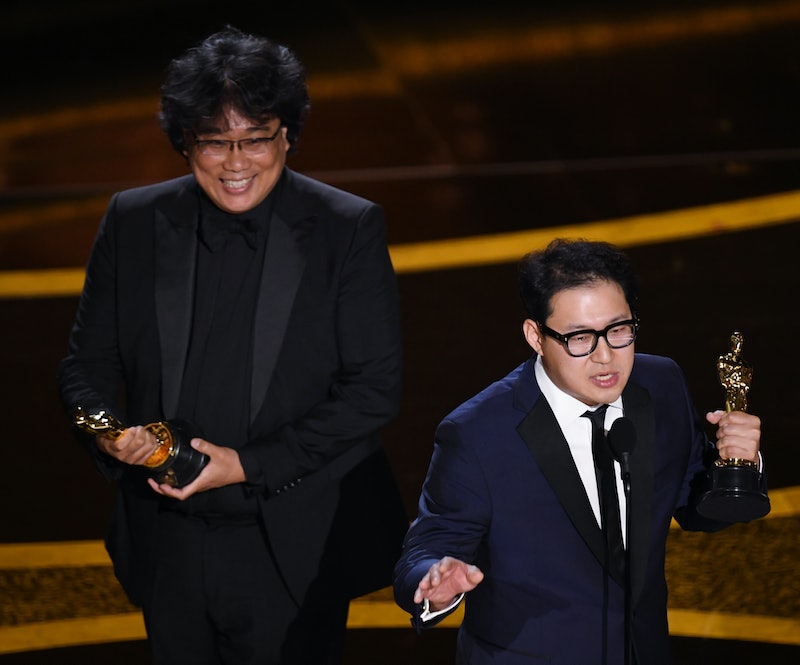 Bong Joon Ho and Han Jin Won's incisive and terrifying class-commentary film Parasite has been making major waves since its release, and on Feb. 9 the Academy awarded Parasite with a total of four Oscars: Best Original Screenplay, Best International Feature, Best Director, and finally, Best Picture. The cast and crew behind Parasite have been having a fantastic year so far, and Bong's Oscar acceptance moment showcased how proud he is of the film's success. It was also quite literally everything we could have hoped for.

Diane Keaton and Keanu Reeves presented the first award to Bong and Han (as Sandra Oh clapped and cheered in the background, pretty much expressing how we all felt). Parasite's Oscar win represents the first-ever South Korean film to win an Academy Award for Best Original Screenplay; this is also the first Oscar win for director and writer Bong.

"Writing a script is always such a lonely process," Bong said during his Best Screenplay acceptance speech. "We never write to present our countries. But this is very personal to South Korea. Thank you."

Han then took the microphone to thank his family and the cast and crew, but meanwhile Bong caught everyone's eye in the background, as he gleefully inspected his Oscar statue like it was the most wonderful thing in the world. And can you blame him? The award was much deserved, and the Oscar win proves how compelling Parasite truly was.

Bong then took the stage again later in the evening when Parasite won the award for Best International Feature Film, which netted him a standing ovation. (Notably, this also makes Parasite the first South Korean movie to win Best International Film.) "Thank you and...yeah. I'm ready to drink tonight, until next morning," Bong joked as the audience cheered.

Then Bong was celebrated again as he won the award for Best Director, to raucous applause and yet another standing ovation. "After winning Best International Feature, I thought I was done for the day and was ready to relax," he laughingly said. "Thank you so much."

Bong then gave a heartfelt tribute to all his other fellow nominees. "When I was young and studying cinema, there was a saying that I carved deep into my heart: 'That the most personal is the most creative.' That quote is from the great Martin Scorsese," Bong said as the camera showed a surprised Scorsese nodding and giving thanks in return. "When I was in school, I studied Martin Scorsese's films; to be nominated was such an honor, and I never thought I'd win."

"When people in the US were not familiar with my films, Quentin [Tarantino] always put my films on his [best of] lists," Bong continued. "Quentin, love you. And Todd [Phillips] and Sam [Mendes], great directors that I admire: if the Academy allows it, I'd like to get a Texas chainsaw and split [the Oscar statue] into five and share it with all of you."

"Thank you," Bong said, ending with a humorous, "I will drink until next morning."

And then the final win of the evening: Parasite won Best Picture, officially sweeping the Academy Awards and becoming the first South Korean film to ever be nominated and win Best Picture; it also became the first ever non-English language film to win the Academy Award for Best Picture. "We never imagined this to ever happen, and we are so happy," producer Kwak Sin Ae said as the whole cast took to the stage. "I feel like a very opportune moment in history is happening right now. I express my deepest gratitude and respect to all the members of the academy."

At one point the Oscar producers attempted to turn the lights off as the Parasite cast and crew were still on stage, but chants of "Up! Up!" from the audience forced them to turn it back on.

"Thank you for being you," producer Miky Lee, who is the vice chair of South Korea's CJ Group, said to Bong before speaking to the audience. "I like everything thing about him ... especially the way he directs."

Parasite is a smart, darkly funny, and ultimately heartbreaking film about the massive divide between the haves and have-nots — and it's no surprise it struck a chord with viewers across the globe. "When I made Parasite, it was like trying to witness our world through a microscope," Bong, who wrote and directed the film, explained at the Lumière Festival in Lyon in October 2019. "The film talks about two opposing families, about the rich versus the poor, and that is a universal theme, because we all live in the same country now: that of capitalism.”

The film introduces viewers to the low income Kim family, who figure out a clever way to infiltrate the wealthy Park home as the assorted help. Their excitement over finally having financial stability is short-lived though, as their elaborate scheme soon gives way to outright horror. The film itself continuously ups the tension for the audience until it all snaps in a shocking third act.

It's clear the cast and crew put their heart and soul into making Parasite the work of art that it is, and Bong has been known to show how proud he is of them, becoming a literal "Proud Dad" meme in the process. He was caught on camera at the SAG Awards excitedly recording the cast as they took the stage and received a standing ovation, for example. He also happily recorded the Parasite actors as they signed autographs backstage at SAG, as well as when they gave their backstage speech.

With Oscars capping off the awards rounds for this past year, Bong undoubtedly has plenty to celebrate. Judging by his red carpet comments, the Parasite cast will have a fantastic evening to look forward to as they segue their celebration into the after-party, which will apparently feature karaoke. "It's tradition!" Bong told journalists.

More like this
In Pop Culture, Female Journalists Are Finally The Main Character
By Jenny Singer
Meghan Markle Wishes Learning Royal Protocol Was Like 'The Princess Diaries'
By Jake Viswanath
Taylor Swift Is Writing & Directing Her First Movie
By Jake Viswanath
Yes, That's Lindsay Lohan's Sister Singing In The 'Falling For Christmas' Movie
By Radhika Menon
Get Even More From Bustle — Sign Up For The Newsletter