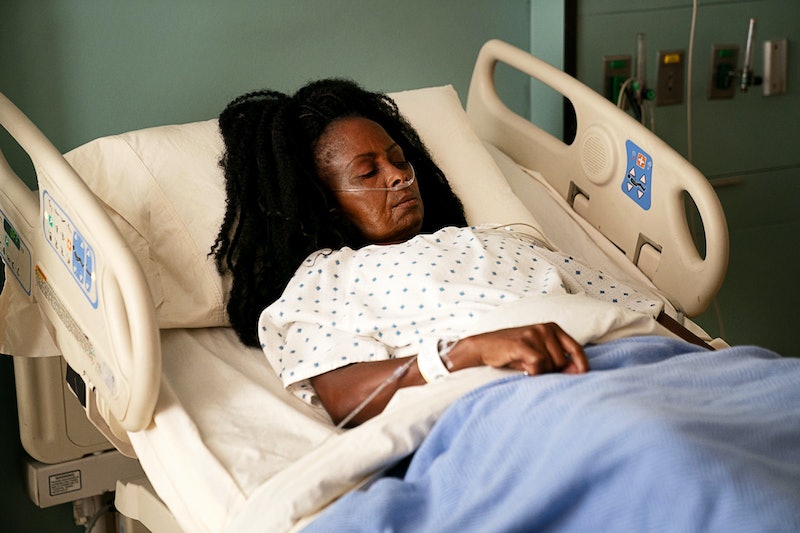 We still have a lot left to learn about Bonnie's mom, Elizabeth, on Big Little Lies. But already, what's being portrayed onscreen is much different than Bonnie and her mom's relationship in the book Big Little Lies is based on. In the show, Bonnie and her mom seem to care for each other, but there's a palpable tension between them. We don't yet know all of the specifics, but it seems like there was some kind of abuse in their past. Bonnie keeps having flashbacks to her mother's angry outbursts during her childhood, and in the July 7 episode, she accused her father of not being around to "protect" her when her mother's rage got out of control.

This is a stark contrast from how the Big Little Lies book depicted their relationship. According to the Los Angeles Times, Bonnie and her mother were both victims of abuse in the book — Bonnie's father, not her mother, was the abusive one in their family. In the book, Bonnie mentions lying to police and social workers to hide her father's abuse, and says the last time she saw her father hit her mother was when she was 20 years old, per the LA Times. This is likely what prompted Bonnie to have such a visceral reaction to seeing Perry get violent with Celeste in the novel, and what caused her to ultimately push him to his death.

It's unclear why the Big Little Lies writers decided to make Bonnie's mother the abuser instead of her father, but the show has made telling nuanced, complicated stories about women its focus, so perhaps that's the direction it's taking here. However, many viewers have taken issue with how things have played out so far.

As a show with predominantly white characters set in an overwhelmingly white town, Big Little Lies drew criticism in Season 1 for underwriting Bonnie, then the only woman of color featured in the main cast. In Season 2, it's taken a step forward in giving her a meatier, more thoughtful storyline, but a step backward in its depiction of Elizabeth — who, as the only other black woman on the show, is being portrayed as both a psychic and an abuser. This feeds into two reductive and problematic stereotypes simultaneously: that of the angry black woman and black voodoo, a type of magic which has historically been depicted in pop culture as something black people use against white people.

"In the book Bonnie's father was abusive and that's why she intervened with Perry. The situation triggered something in her. Making her abuser a Black woman in the show while her white dad felt 'helpless' to stop it was… a choice," wrote one viewer.

Of course, there's still a lot to unpack with Bonnie and Elizabeth, and it's unclear what Big Little Lies is building to with their relationship. For now, fans are still curious what will happen, but they're remaining cautiously optimistic, to say the least.