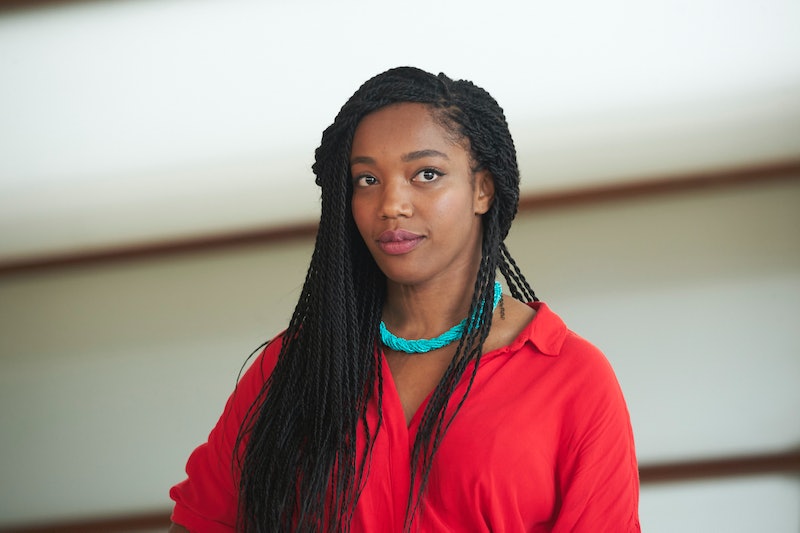 You're going to be seeing a lot of Naomi Ackie, who plays Bonnie on The End Of the F***ing World, in the coming months. The British actor joins the Netflix series in Season 2 as a mysterious new character who Alyssa and James encounter. And though she ends up becoming a central part of the story, that isn't the only reason you'll want to remember Ackie's name — her next role is in one of the year's biggest movies.

Ackie first began gaining recognition in the UK in 2016, when she starred alongside Florence Pugh as Anna in Lady Macbeth. According to IMDb, she was nominated for an Evening Standard British Film Award for the part, and won a British Independent Film Award for "Most Promising Newcomer." She's also had guest roles on shows like Doctor Who, Vera, and Cleaning Up, was a series regular in the Channel 4/Hulu cult hit The Bisexual, and appeared in Idris Elba's feature directorial debut, Yardie.

But the most notable and exciting thing about Ackie is that she's one of the new actors joining the Star Wars universe in Star Wars: The Rise of Skywalker, which is due out in December. Similar to The End of the F***ing World, her character, Jannah, is rather mysterious. It's known that she fights on the side of the resistance, and in the movie's trailer, she rides a horse-like creature called an Orbak while carrying a bow and arrow, but that's the extent of what's been revealed.

"She's fierce," Ackie vaguely teased of the character to The Los Angeles Times in a recent interview. "She's got a lot of history involved with the issues in the film. Once you find out her story, you're rooting for her and you can understand why she's fighting."

In fact, it's this spirit that most attracted her to Jannah. "I get angry at things and I want to fight against the system that makes people feel like they're not of worth," Ackie continued. "That means sometimes I can't keep my mouth shut, and sometimes it brings out the warrior in me to have discussions that might not be easy."

But unlike Jannah, Ackie isn't much of a mystery. She told the Times that she knew she wanted to be an actor by the time she was a teenager, and has also become interested in writing and directing theater. She grew up loving Disney princesses and Star Trek, but it was Harry Potter that eventually pushed her toward film.

"If there was anything that made me want to be in films more," she said, "it was like looking at [the young Potter cast] and wanting that feeling of being a part of something epic.”

Come December, that dream will come to to fruition.

More like this
Here’s Everything Coming To & Leaving Netflix In February
By Jake Viswanath
Adam Ali Hopes 'Waterloo Road' Will “Subvert” Queer Misconceptions
By Sam Ramsden
'The Crown' Season 6 Has Suspended Filming "Out Of Respect" For The Queen's Death
By Bustle Staff
At 28, Debra Jo Rupp Was Living A Much Different '70s Show
By Grace Wehniainen
Get Even More From Bustle — Sign Up For The Newsletter
From hair trends to relationship advice, our daily newsletter has everything you need to sound like a person who’s on TikTok, even if you aren’t.