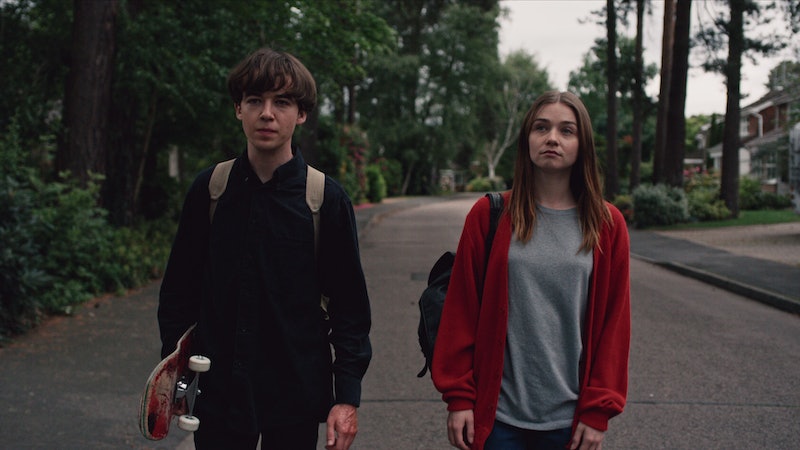 Adolescence has a way of warping our perspective, making even the smallest crisis feel like the actual end of the world. But it's especially hard for the teenagers on Netflix's The End of the F***ing World to put their challenges in perspective as they quickly go from being misanthropic loners sitting alone at the cafeteria table one day to being on the run from the police the next.

The show, which is based on Charles Forsman's graphic novel of the same name and is gaining steam thanks to its near-perfect rating on Rotten Tomatoes, follows James, a budding psychopath with antisocial tendencies (Black Mirror's Alex Lawther), and Alyssa, a foul-mouthed outsider with a penchant for rebellion (Penny Dreadful's Jessica Barden) as they quickly get fed up with their unfulfilling and equally complicated home lives in their nondescript hometown and run away together.

It all starts when Alyssa develops a convenient crush on school weirdo James, and dryly negs him into being the object of her affection. "I saw you skating," she says. "You're pretty shit." James, meanwhile, has no romantic interest in Alyssa, at least at first — he's more interested in Alyssa as another kind of object: one he could kill. Yes, James has already graduated from the "killing small animals" phase of psychopathy, as he admits in his own internal monologue voiceover, and he wants to experiment in his teenage years not with things like sex and drugs, but with killing something a little larger than a squirrel.

Forcing these two mismatched outsiders together with the threat of murder on the table is a decidedly bleak premise for a show, but The End of the F***ing World treats Alyssa's angst and James' exceedingly dark desires with a deadpan matter-of-factness — and crucially, never a hint of smugness — as they forge ahead on their doomed trip. The creeping sense of dread on their journey is expertly balanced by the show's retro and doo-wop heavy soundtrack, which also lends a woozy sense of timelessness to some of the show's more surreal scenes (Bernadette Carroll's '60s cover of the ballad "Laughing On The Outside" plays while blood ominously collects into a pool on the floor in an early episode, for example).

But what could easily be simply a pitch-black comedy about two outcasts on the run builds into something much more substantial than the show's sardonic trailer suggests. While The End of the F***ing World is unafraid to get very, very dark, it's the series' brilliance in shading in the complexities of its characters in the (slightly) lighter moments that sets it apart. An impromptu Hank Williams dance party in the middle of a bout of breaking-and-entering acts as both a respite from the show's more disturbing scenes and also nails the fumbling dynamics of teenage flirtation, while Alyssa's visible glee in cursing out a waitress at a diner is played for its shock value but also hints at the deeper, more complicated feelings roiling below her confrontational, sarcastic surface.

It's about halfway through the show's compact 8-episode season, when a team of cops (played by Wunmi Mosaku and Game of Thrones' Gemma Whelan, with delightfully cringey sexual tension) begins tracking down James and Alyssa for crimes they committed, that The End of the F***ing World begins to drop its guard, and lets its main characters begin to drop theirs, too. Gradually, a show that gets early mileage out of how blasé its main characters are about the increasingly dangerous and often downright disturbing predicaments they find themselves in on the road takes a step back to emphasize that it's interested in being more than a dark caper about two teens on the run.

Though the dominoes keep falling around James and Alyssa as they try to evade capture, the most satisfying aspect of The End of the F***ing World is how it's not content to take James and Alyssa's sometimes outrageous actions at face value, painting an empathetic portrait of how the particulars of childhood trauma shaped James and Alyssa into teens with their own uniquely abrasive exteriors. They're products of circumstances that were beyond their control, and as the show delves deeper into their backstories, it makes their present-day actions and the deepening of their initially artificial bond all the more compelling.

Ultimately, The End of the F***ing World manages to balance the outlook of its teen misanthropes with a surprisingly hopeful worldview: It's not that James and Alyssa are so uniquely messed up that they're made for each other, but that everybody, no matter how strange or how relatively normal, is the sum of a very specific mix of dysfunctions. It's freeing to finally understand that you can't outrun who you are. After all, embracing it isn't the end of the f***king world.