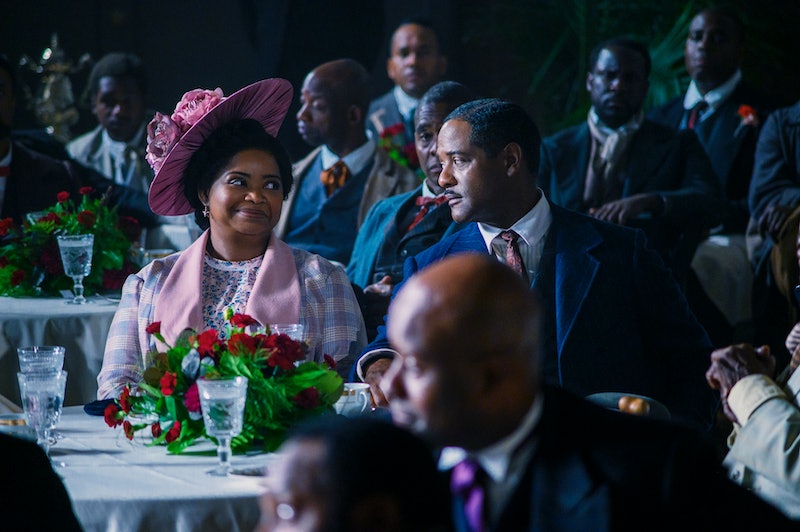 Sarah Breedlove, aka Madam C.J. Walker, overcame many obstacles in her life to become a hair care millionaire, and in Self Made we see one of her formidable opponents was political leader Booker T. Washington. While Booker T. Washington and Madam C.J. Walker's relationship in Self Made is purely antagonistic, in real life it was much more complex, and their frosty relationship later gave way to mutual respect.

As Self Made tells it, Walker's attempts at gaining the endorsement of Washington was full of false starts. After Sarah fails to get an audience with Washington, C.J. startles him in the bathroom, falsely conveying to Sarah that Washington agreed to dine with them. Sarah's hopes that Washington will introduce her at his 1912 National Negro Business League Convention are dashed when he instead calls her rival Addie to the stage. Finally, after it's clear Washington has no intention of acknowledging her presence in the audience, Sarah storms the stage and gives her own introduction.

This infuriates Washington, and in the hallway he calls her outburst "rude and uncalled for." He accuses her company of "shaming Negroes into Eurocentric standards of beauty" and that "soon you will have Negro women out-earning Negro men," he says. "How is America going to take us seriously if we allow our women to surpass us? ...That outburst in there is precisely the reason why you ladies need to be kept in your place."

Self Made is based on On Her Own Ground by Walker's great-great-granddaughter A'Lelia Bundles, and Bundles never mentions that a sexist outburst from Washington took place. He really was initially resistant to Walker speaking at his events though, and he did dislike the cosmetics industry because, per Washington biographer Louis R. Harlan, they "fostered imitation of white beauty standards."

Per Bundles and Harlan, in January 1912 Madam Walker heard of Washington's Negro Farmers' Conference at the Tuskegee Institute, and personally visited Washington's home to ask if he could introduce her to the attendees. He turned her down, but Walker persisted, and eventually he allowed her to speak at a side venue called the Chapel. Despite talking hair care to a bunch of farmers, Bundles wrote that the reaction was "sufficiently positive" that Washington allowed her to market her products for the rest of the conference. Walker expressed gratitude, and even made a small donation to the school.

Despite this positive interaction, Washington was strangely noncommittal when Walker asked him later that year if she could then speak at his National Negro Business League convention (the one you see in Self Made). When her friend George Knox stood up in the audience to ask if the audience would hear Walker's remarkable story during a Q&A session, Washington icily dismissed him by calling on another attendee. After Washington called up several other men to present — all with smaller businesses than Walker, Bundles noted — Walker stood up and addressed Washington from the audience.

"Surely you are not going to shut the door in my face," she said. "I feel that I am in a business that is a credit to the womanhood of our race. I went into a business that is despised, that is criticized and talked about by everybody." She described how she came from the cotton fields of the South, became a washerwoman, a cook, and finally the head of her own company. "I am not ashamed of my humble beginning," Walker said. "My object in life is not simple to make money for myself ... but to use a part of what I make in trying to help others."

This is where Self Made inserted Washington's sexist accusations, but Bundles wrote that no recorded transcripts from that day "reveal Washington's personal, unspoken reaction" to Walker's speech. He did openly ignore her though, calling on the next male presenter "as if Madam Walker had not uttered a word."

Washington's snubs and hot-and-cold attitude were undeniably ridiculous and ego-driven, but Walker persisted in winning him over and gaining his endorsement. In July 1913, she invited Washington to be her houseguest for the dedication of a new Indianapolis YMCA, which both Washington and Walker donated money to. He surprisingly accepted, and Walker showed him "every courtesy" at her house. In return, Washington praised Walker to the YMCA audience, recognizing she was the largest donor at the event.

Finally, at the Tuskegee Institute's 1913 National Negro Business League Convention, just a year after he spurned her, Washington introduced Walker to attendees as "a striking example of the possibilities of Negro womanhood in the business world."

"Washington must have begun to realize Madam Walker's moneymaking potential, as well as the symbolic and inspirational value of having a former washerwoman turned philanthropist support his school," Bundles theorized. "She, in turn, fully understood the advantages of having a connection with the man who controlled the editorial policies and purse strings of dozens of black newspapers."

Ultimately, Madam C.J. Walker's relationship with Washington shows exactly why she was a successful business woman: she was persistent and bold, and never let a man's ego get in the way of her dreams.