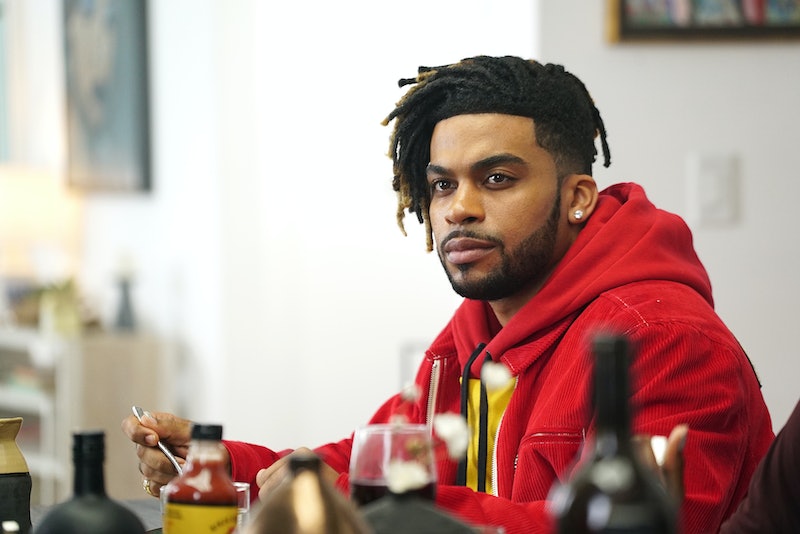 BET’s Boomerang surprised skeptics who weren’t sure if the scripted series could hold a candle to its beloved 90’s movie predecessor by delivering a solid first season. The show had big names behind the scenes like Lena Waithe and Halle Berry, but the cast was comprised of lesser known actors who worked diligently to engage today’s Black millennial audience. One of those new faces is Leland B. Martin, who portrays Ari, a party promoter, aspiring director, and hilarious free spirit who has deeply resonated with fans as a Black bisexual man who is unapologetic about his truth.

“There are people who identify with Ari who many not have ever seen themselves on TV and I think representation is important,” says Martin via a Bustle telephone interview. “When you see yourself, you develop a strength in your identity. As a young boy growing up, when I would see the Black superheroes and the Black Power Ranger, it would give me a sense of self.”

Martin says he wants Ari to be an imperfect hero who makes Black men and boys feel secure in their own sexuality. A major part of that confidence comes through self-advocacy in the face of willful ignorance and hate, which Boomerang addressed in many ways; most notably for Ari, it was a scene earlier this season that included a heated exchange between him and a random ex-girlfriend at an Atlanta Pride parade.

She insisted on labeling Ari as gay because of his attraction to men, but he firmly corrected her, addressing a common stigma that bisexual people face from those who want to force them into a rigid category for their own comfort.

“A lot of people try to put labels on other people just for their own mental security,” says Martin. “You want to put everyone else in a certain box because that’s what makes you feel better about your life and understanding...I guess it made her feel better to say that Ari was gay. But Ari is like 'no no no!' That’s what I love about Ari and what I want people to see.”

Martin also loved how all of the characters have their own story arcs, but each episode manages to tie in their collective love and support for each other.

"I love the fact that the dynamic and friendship of these three show how bisexual, gay, and heterosexual people can have respect and a genuine friendship and love for each other without fear of each other or of being labeled.”

The interactions between this eclectic yet tight-knit friend group have been the primary focal point of Season 1 with deep conversations about love, life, workplace issues, social commentary, and dreams. And, one of the most interesting subgroups in this friendship circle is Ari’s solid brotherhood with Bryson and David. It's reminiscent of Marcus, Gerard, and Tyler’s friendship from the Boomerang movie, but the TV trio sheds a different light on Black male friendships. David, a Christian pastor, Bryson, a heterosexual corporate man, and Ari may have their differences but their solid bond challenges the incorrect notion that Black heterosexual men avoid friendships with men who fall elsewhere on the sexuality spectrum.

Martin believes this friendship rebuffs toxic masculinity and the way many Black boys are generally conditioned in terms of expressing their fragility and sexuality. “Everyone is so afraid of other people’s opinions because of the society that we were born into, the hypermasculine culture," states Martin. "I love the fact that the dynamic and friendship of these three show how bisexual, gay, and heterosexual people can have respect and a genuine friendship and love for each other without fear of each other or of being labeled.”

Thankfully, Boomerang was renewed for Season 2, per Variety, so fans will get more brotherly love between Ari and the guys as well as great moments with Simone, Tia, and Crystal. Of course, Martin doesn’t quite know where the story will go next but he really wants Ari to step into his career destiny.

“I would like to see the professional growth of Ari,” says Martin. "We know who he is sexually, we know who he is as a friend, the party guy, the fun guy. But, he’s still making his way from transitioning from party promoter to director. I want to see his professional development."

Ari’s ongoing journey towards this new career trajectory mirror’s Martin’s own path from a successful start in the financial advising arena to acting full-time. It was a calculated risk that he had to take to find true happiness and freedom. “I wasn’t passionate about going into that 9-5 every day,” he affirms. “I started to despise it and it started to take a negative effect on my mental health. I came into acting and I just fell in love with it from that first acting lesson...I felt the passion for it and I went for it 100% and said this is what I want my life’s work to be.”

Right now, Martin’s work is primarily focused on his Boomerang role but his ultimate goal is take creative control behind the scenes as a writer, producer, and, like Ari, a director so he can play his part in inciting important conversations and impacting culture. “The writer has the opportunity to make their message come to life," Martin says. "It just so happens that I tend to agree with Lena on a lot of things and I am totally okay with saying the things that she has to say. However, I want to make my own [show] and say what I want to say at the end of the day. And, it’s a beautiful thing to have that power, to be able to shift culture and make things a reality to influence people.”

There’s a major level of power behind the lens, but Martin’s impact is currently being felt onscreen through his necessary and bold character. Right now, he isn’t in a rush to make his next career move, so hopefully there will be many more seasons of love, laughter, friendship, and life lessons from Ari and the crew.