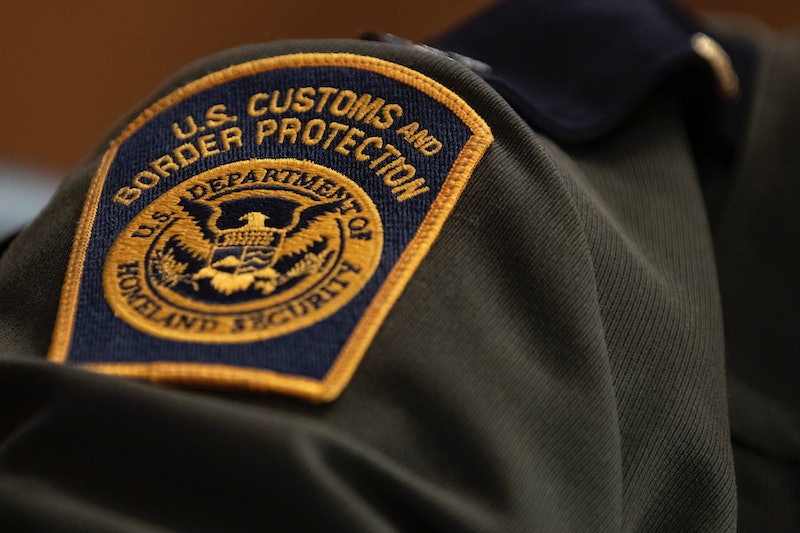 On May 21, a longtime Arizona Border Patrol agent was arrested on multiple sexual assault charges. According to ABC News, the Tucson Police Department allege that Border Patrol agent Steve Charles Holmes sexually assaulted three women over a seven year period — and they're still investigating whether there may be additional related cases.

ABC reported on May 23 that a woman told Tucson police that 33-year-old Holmes, an employee with U.S. Customs and Border Protection (CBP), had sexually assaulted her. The outlet noted that the woman said that she had met Holmes through a dating app. Holmes has not commented publicly on the allegations against him. Bustle has reached out to the Tucson Police Department for comment.

As Tucson police were investigating the woman's allegations, they found that other women had also filed reports against Holmes in the past, ABC noted. "The investigation uncovered multiple victims with similar reports occurring from January 2012 to January 2019," the Tucson Police Department told ABC. Holmes was arrested on Tuesday and charged with three counts of aggravated assault and three counts of sexual assault, People noted. The magazine indicated that he was booked into Pima County Jail, with ABC reporting that he remains in the facility on a $25,000 cash bond.

A U.S. Customs and Border Protection spokesperson offered comment on Holmes' arrest in a statement emailed to Bustle, saying:

Holmes has seven years of service with the U.S. Border Patrol. He has been placed on administrative duties pending the outcome of the investigation. The U.S. Border Patrol stresses honor and integrity in every aspect of its mission. We do not tolerate misconduct on, or off duty, and will fully cooperate with all investigations of alleged misconduct by our personnel. Please see the U.S. Customs and Border Protection Standards of Conduct Policy.

The U.S. Customs and Border Protection spokesperson also adds that "No additional information is available at this time" and says that questions about the ongoing investigation should be referred to the Tucson Police Department.

Holmes' arrest represents that most recent one of a border patrol agent who has allegedly engaged in criminal activity while off duty, but it certainly isn't the first. Indeed, as the New York Times reported in September 2018, Texas border patrol agent Juan David Ortiz was arrested after allegedly murdering four women. Oritz has been charged with capital murder in the case and pleaded not guilty, The Guardian reported.

The Tucson Police told ABC News that the investigation into Holmes' case is still ongoing. Boston 25 News indicated that Tucson police officials said that anyone who has information regarding the case should contact the authorities at 88-CRIME (27463).

More like this
MOBO Awards Found Kanya King On The Woman Whose Grit & Determination Spur Her On
By Kanya King
Amanda Gorman Shared A Powerful Message On Meghan Markle’s Penultimate Podcast
By Darshita Goyal
Adam Driver & Joanne Tucker’s Relationship Timeline Starts With Cheese
By Jordyn Tilchen
'Waterloo Road' Is Back, With More Than A Few Familiar Faces
By Sam Ramsden and Vivian Iroanya
Get Even More From Bustle — Sign Up For The Newsletter