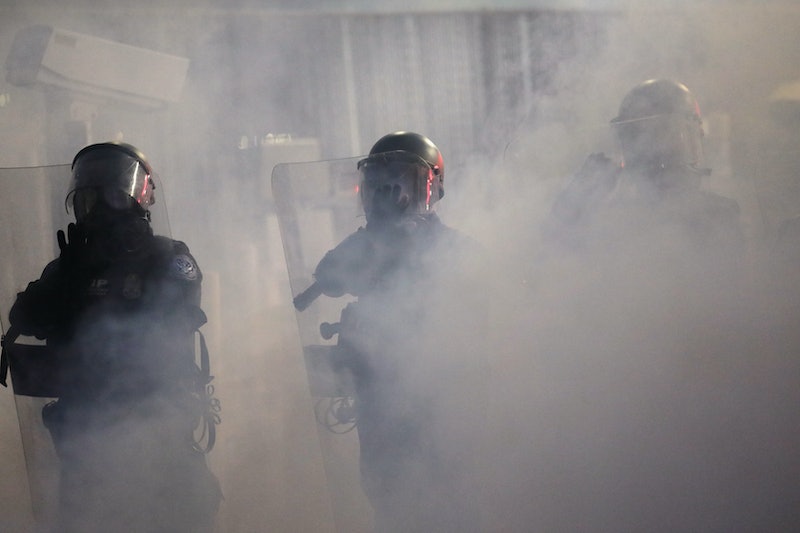 As the New Year kicked off Tuesday, border patrol agents fired tear gas at the U.S.-Mexico border in a reported effort to disperse a group of migrants. U.S. Customs and Border Protection (CBP) says in a statement that agents deployed tear gas and pepper spray "upwind" of an unspecified number of migrants reported to be throwing rocks at them — but Associated Press reporters on the scene had a different account of what happened. CBP's Office of Professional Responsibility is expected to review the incident.

According to CBP, approximately 150 migrants attempted to enter the country illegally by either climbing over or crawling under the border fence along the U.S.-Mexico border's San Diego sector. While CBP says a group of 45 migrants ultimately turned back towards Mexico, the agency said others in the group reportedly began throwing rocks at CBP agents. "To address the rock throwers assaulting agents and risking the safety of migrants attempting to cross who were already on the U.S. side, both smoke and minimal countermeasures were deployed," a statement from the agency reads.

What's more, CBP claims the gas wasn't directly aimed at migrants. "Agents deployed smoke, pepper spray and CS gas to a position upwind of the rock throwers and south of the border fence," the statement reads. "No agents witnessed any of the migrants at the fence line, including children, experiencing effects of the chemical agents, which were targeted at the rock throwers further away."

However, an Associated Press photographer on the scene at the time of the incident reported that the tear gas CBP agents lobbed into Mexico did affect migrants — including some women and children. What's more, Associated Press reporters said they only saw migrants throw rocks after tear gas had already been fired by U.S. agents. They also reported seeing border patrol agents fire plastic pellets.

Reuters also reported witnessing migrants being affected by CBP's tear gas, including one person who had reportedly been struck by a gas canister. The news outlet said its witnesses not report seeing any migrants throw rocks at CBP agents or officials.

CBP tells Bustle that initial operational reporting found that border agent's use of countermeasures such as tear gas, pepper spray, and smoke "successfully suppressed the rock throwers" and caused them "to flee the area." The agency also said that while "most of the migrants" attempting to enter the country illegally returned to Mexico on their own, 25 apprehensions were made.

Tuesday's early morning incident comes roughly five weeks after border patrol agents fired tear gas on a group of some 500 migrants who'd reportedly attempted to rush blockades near the San Ysidro Port of Entry in Tijuana. At that time, White House Press Secretary Sarah Huckabee Sanders described the action as "an appropriate use of force" used by border patrol "to protect themselves and prevent an illegal rush across the border," KPBS reported.

CBP tells Bustle that its Office of Professional Responsibility plans to review the incident under the agency's use of force policy.