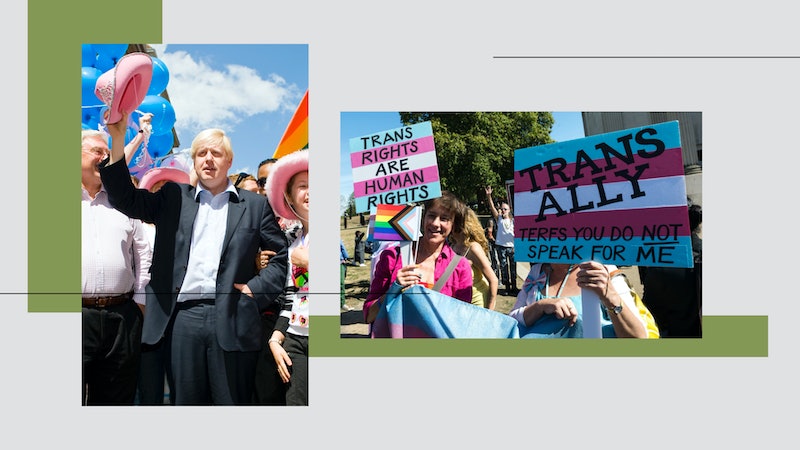 Under the current system, it can take as long as five years for a trans man or woman to legally change their gender in England and Wales. Plans were being drawn up under Theresa May’s government which would have opened up the process a little more, doing away with the medical approval required. However, new reports suggest that Boris Johnson will scrap plans that would allow people to legally change their gender by “self-identification.” The Sunday Times reported on a leaked document which highlights how plans were first rolled back and are now being "ditched" altogether. Activists have said that should the policy be completely dropped, it would send “a chilling message that the UK is a hostile place for trans people.”

The plans brought in by May made the process of changing your gender shorter by removing the requirement that a panel of doctors would have to certify an individual's transition. Instead, you’d only have to stand in front of a judge and confirm your gender change. The Sunday Times reported that the leaked paper described how Johnson and his team intend to ditch these plans entirely. Instead, the report said, the government will put safeguards in place to protect “safe spaces” for women – which could see gender-neutral lavatories removed – and (finally) ban “gay cure” therapies.

In 2018 the government consulted the public on the reforms and 70% came out in support of self-identification. However, The Sunday Times revealed that officials believed the results were “skewed.” It quoted a source as saying: “In terms of changing what is on your birth certificate, you will still need to have proper medical approval. And you’re not going to be able to march in and find a hippie quack doctor who is willing to say you’re a woman. That’s not going to happen.” A source told PA News that the response was still being finalised.

The leaked plans have already been condemned by LGBT activists, including the Conservatives own LGBT group. Campaigners have argued that self-identification is a step to ensure trans people aren’t discriminated against.

Speaking about the announcement that the government plans to scrap these plans Chiara Capraro, Amnesty International’s Women’s Rights Programme Director said: “more than two years ago, the Government rightly set out a plan to reform the out-of-date Gender Recognition Act - a U-turn on this would send a chilling message that the UK is a hostile place for trans people. Perpetuating wrong stereotypes of trans women as a danger to other women is dehumanising and wrong, and risks further inciting hate crimes against trans people.”

More like this
Gen Z Are Twice As Likely To Identify As Queer, According To New Data
By Sam Ramsden
How To Help Those Affected By The Turkey-Syria Earthquake
By El Hunt
This Is When Netflix Is Going To Start Charging You For Sharing Passwords
By Darshita Goyal
Here’s Where The NHS Nurses’ Strike Currently Stands
By Sophie McEvoy
Get The Very Best Of Bustle/UK
Sign up for Bustle UK's twice-weekly newsletter, featuring the latest must-watch TV, moving personal stories, and expert advice on the hottest viral buys.