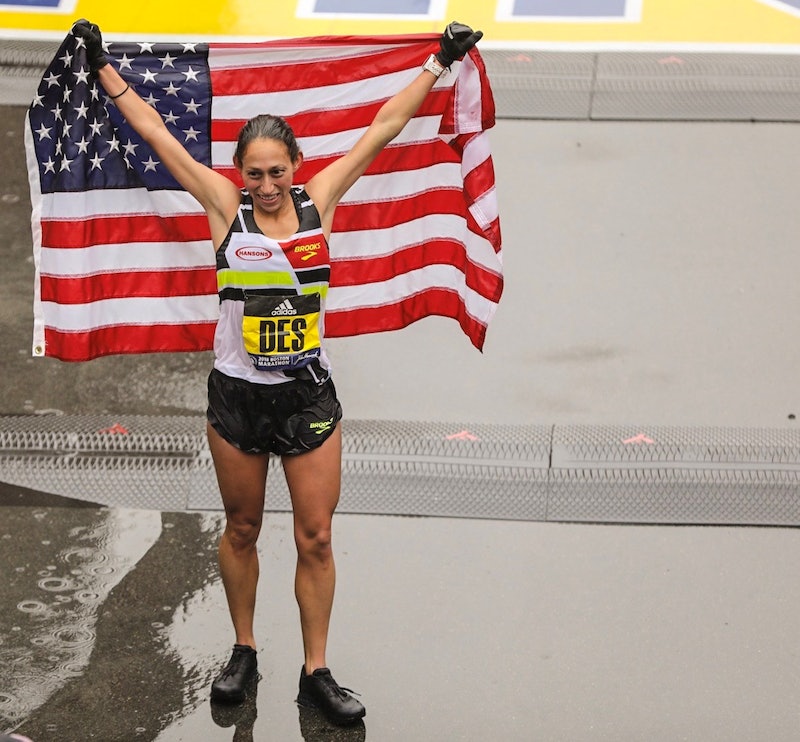 Courtesy of A Runners Eye
By Melanie Mignucci
April 20, 2018

Desiree Linden is very excited to take a vacation.

After becoming the first American woman to win the Boston Marathon in 33 years on April 16, the 34-year-old Olympian tells Bustle she’s really looking forward to “staying up late, and [doing] all the things you don’t do when you’re training.” But after her three-week break, she’ll be back to hitting the pavement seven days a week, in preparation for the next event.

This past marathon was nothing short of historic for a host of reasons. It was the five year anniversary of the Boston Marathon bombing, which killed three people and injured hundreds of runners and bystanders. It also took place in a torrential downpour, during a chillier-than-usual spring, with winds howling at up to 30 miles per hour. But it also marked a historic collaboration between the American women leading the pack to make sure one of them broke the tape for the U.S.A.

“Everyone was pretty selfless on the day” of the marathon, Linden tells Bustle. “It was like, how do we put ourselves in a position to have success here? What can we do as a group to make sure we get someone to break the tape?”

In a moving interview with Good Morning America, Linden revealed that there was a point in the marathon where she didn’t think she was going to make it to the end — and she took that as an opportunity to help fellow American runner Shalane Flanagan. “I thought early on that I might be pulling the plug, so I just kind of nudged her and said, ‘Hey, if I can block the wind or help at all, let me know,’” she revealed during the April 17 segment.

Sure enough, that teamwork was just what Linden needed to overcome the negative self-talk. Surrounded by American women, Linden finished the 26.2 mile race at two hours, 39 minutes and 54 seconds. Flanagan, who was the first American woman in 40 years to win New York City Marathon in 2017, ended up placing seventh, at just over two hours and 45 minutes.

“We all want to win,” says Linden, “but at the end of the day, […] it wasn't just about the individual — it was about getting that win for America.”

But Linden acknowledges that it’s important to hear your body out in those moments. “It's a difficult balance, and I think that's what makes the event so challenging,” she tells Bustle. “For the competitors that are in the front, you just try to dig as deep as you can and push out all the doubt you can on race day. If you get to the point where your body says no more, I'm done, unfortunately, it's usually pretty drastic. I was glad I didn't have to go that deep into the well.”

So what exactly goes through your head for the two-plus hours you’re running a race?

“When I get into trouble, I'm thinking about how much of the race is left,” Linden says. “That’s super daunting. Oh, 18 miles to go, 10 miles to go. So I try to stay really present and run the mile that [I'm] in.” For aspiring runners or people newly starting out, she had some advice. “There's little things that you can focus on — your form, your race pace, your breathing pattern, the mechanics of your body while you're out running. Try to stay relaxed, instead of worrying about how much you have left.” It won't exactly be easy, she says, but the pay-off is worth it. “If you start and stick with it for 10, 15 days, it's tough at first, but learning something new always is,” she says.

"I started running because I loved competing, [...] but I've learned to love just going out and running for the sake of running," she says. "It's just this crazy form of self-care that's a great way to see the world. If you can get in the habit of running, it can change your life.”

And, just maybe, help you make American history to boot.