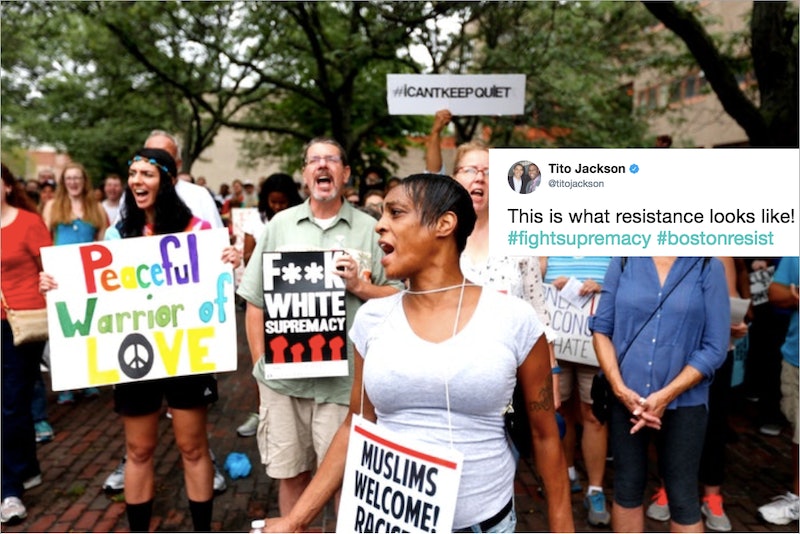 On Saturday, thousands of counter-protesters gathered ahead of a Free Speech Rally in Boston. Many of those attending the Fight Supremacy counter-protest feared the "free speech" rally would incite white supremacist violence similar to what broke out in Charlottesville last weekend. Throughout the morning, anti-racist activists from Antifa, Black Lives Matter and other leftist groups congregated in the Boston Common, far outnumbering those attending the white supremacist rally.

On Friday, the Boston Mayor Marty Walsh urged constituents to stay clear of the Boston Common and the alt-right rally. "They say that interacting with these groups just gives them a platform to spread their message of hate. They recommend that people should not confront these rallies. So we’re urging everyone to stay away from the Common," Walsh said, referencing a conversation with The Southern Poverty Law Center.

The turnout on Saturday suggests that concerned Boston didn't take Walsh's advice to remain complacent, which has resulted in a large peaceful gathering of Fight Supremacy protesters far outshadowing the white supremacists. This serves as an example of safety in numbers, that is -- when the numbers are in favor of the anti-racist resisters.

Unsurprisingly, the internet is already flooding with "Boston Resist" tweets both from those on the scene, and people expressing solidarity from afar.

When The Counter-Protest Far Outnumbers The Rally

When A Last Minute Protest Outnumbers The Inauguration Crowd

You Can Barely Spot The White Supremacists

An Endless And Peaceful Gathering

The Stark Contrast Between The Attendance Of The Two Groups

A Parade Of Signs

People Protesting On Behalf Of Their Ancestors

The Inextricable Link Between The Prison Industrial Complex And White Supremacy

The Ever Relevant Desmond Tutu Quote

The Local Churches Standing In Solidarity

The Sign That Perfectly Links The Solar Eclipse To Trump's Impeachment

Cuties With Clever And Creative Signs

Teachers Coming Through With The Banner

When Germans Have To Protest Nazis In America

A Pre-School Teacher Armed With Glitter

Church Attendees Worship In Preparation For the Protest

The Dangerous Euphemism Of Calling It A "Free Speech" Rally

A Clergy Instructing His Congregation To Take Action

It's safe to assume that as the day progresses, the #BostonResist hashtag will continue to fill up with photos and reports live from Boston.