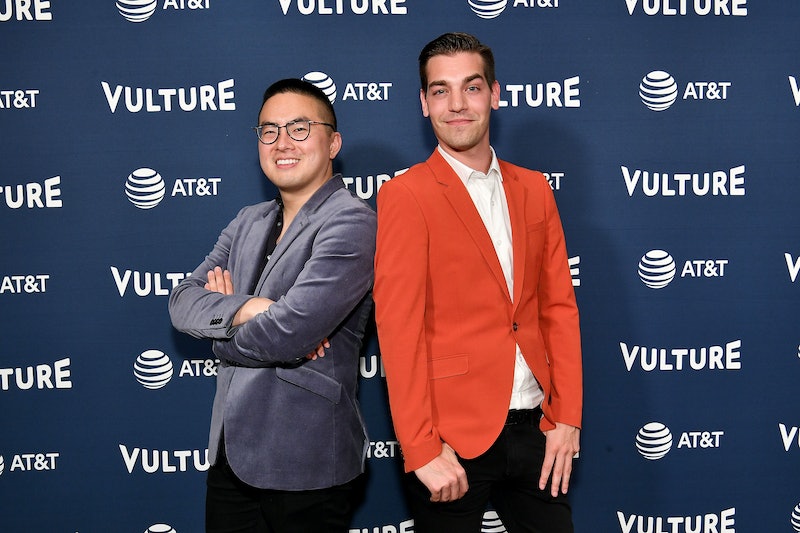 Now here is some great news that should put a smile on your face. Saturday Night Live added Bowen Yang to its Season 45 lineup, The Hollywood Reporter announced on Thursday. Yang's addition makes him the first full-time Asian American SNL cast member — ever. (Former SNL member Fred Armisen is a quarter Korean and Rob Schneider is a quarter Filipino.) Seeing as he has a background in comedy writing and has showcased his many talents on social media, Yang sounds like the perfect fit for NBC's late-night sketch comedy series.

Actually, Yang has been part of the SNL family since Season 44. Not only was he a staff writer last season, but he also made his debut last season as Kim Jong-un alongside host Sandra Oh. If you've never seen Yang in action, then you need to remedy that. First of all, you really should start following him on Twitter. Then, you should check out Yang's lip sync videos that he tweets from time to time, in which he perfectly recreates iconic scenes from movies and TV shows.

In August 2018, Yang went viral with his Devil Wears Prada lip sync video, in which he played the part of Meryl Streep's character, Miranda Priestly. His ability to lip sync is flawless. Also, pay attention to his facial expressions. It was like he starred in the movie himself. If you didn't think it took talent to lip sync, well, Yang shows it certainly does.

Wow. This one is full of a lot of heart and emotions. Oh would be so proud. His Cristina Yang tribute even caught the eyes of a few famous faces. Olympian Adam Rippon wrote, "This has me shaken to the core. THE BREATHING?! Genius." And American Horror Story actor Leslie Grossman tweeted Yang, "The skill level here is so off the charts I have no words. I am changed. Mazel on your talent."

Oh, yes. Yang did his best Tyra Banks when embracing that epic scene from Cycle 4. You know, when Banks, yelled at contestant Tiffany Richardson, "We were rooting for you! We were all rooting for you!" As The Good Place's D'Arcy Carden tweeted Yang, "HOW DOES IT FEEL TO BE THE VOICE/FACE/SOUL OF A GENERATION?!?" Preach.

And This Erin Brockovich Lip Sync

And the Oscar goes to... But, really, have you ever seen someone lip sync so well? Yang's talent is super impressive, which is exactly why he's heading to SNL.

Despite Leslie Jones' SNL departure, Yang, Fineman, and Gillis will hopefully bring even more comedy magic to NBC's long-running series. And if the show ever needs anyone to lip sync, they already have a lip syncing legend on the cast.

Editor’s Note: This article has been corrected to reflect Fred Arminsen's Korean heritage on Sept. 23, 2019.