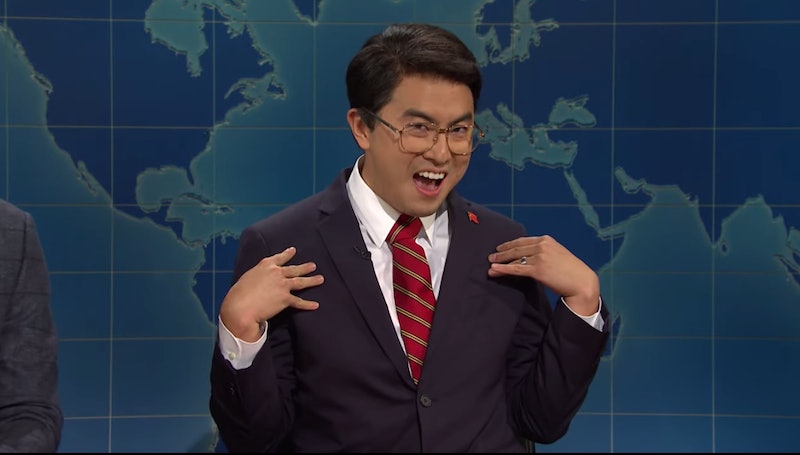 As the first full East Asian cast member on Saturday Night Live, Bowen Yang perked up a lot of ears when his hiring was announced in September. The writer and comedian showed off some of his comedic chops in Season 45's premiere when he played presidential candidate Andrew Yang in the cold open, but it wasn't until the Oct. 5 episode that he really got a chance to shine. Fans couldn't get enough of Yang's Weekend Update skit on Twitter, with many already predicting he'll be a standout this season.

The US-China Trade War has been a hot button topic lately, so naturally Weekend Update had a skit dedicated to discussing all the complexities involved. Covering the issue was Yang, who Michael Che invited on as a Chinese trade representative named Chen Biao. Decked out in oversized glasses and an immaculately clean business suit, Biao at first looked like a typically serious, uptight government official.

"Thanks for being here, but sir do you speak English?" Che asked after Yang's character introduced himself in Mandarin. The set-up was obvious. Many late night comedy shows have fallen prey to stereotypes when portraying Asian characters in the past, and this marked the first time Saturday Night Live was handing the reins over to a comedian of full East Asian descent. But Yang quickly proved he knew exactly how to handle a character such as Biao: with flamboyance, verve, and just the right amount of charming arrogance that totally flipped the script on what viewers may have been expecting.

"Yes, fluently, and that's what's called a power move," Biao revealed with a laugh and a pleased grin. Yang's charm just increased from there, with Biao laying out the trade issue in sparse terms and then expressing joy about how he's loving the drama and attention.

"You increase taxes on our imports, I increase taxes on yours. Meanwhile, I'm in the middle of it all and you know I hate the attention," Biao humorously explained to Che. "Jk, I'm balling out right now because I'm the top tariff task master, kapow!"

"I gotta say, this was not the attitude I was expecting from a top Chinese official," Che responded with a laugh. Fans were quick to echo Che's sentiment on Twitter, with many pointing out that Yang's twist character was one of the most delightful reveals in the whole episode.

"I'm basically the Lizzo of China right now," Yang said to raucous laughter during the skit. "Turns out I'm 100% that trade daddy."

When Che tried to push back that China can't possibly keep up this trade war forever, Biao laughed and lampooned the American point-of-view. He noted that the Chinese can survive "without your movies starring The Rock" but "good luck without iPhones."

"How are you gonna text us in the middle of the night saying 'You up? Can you investigate Joe Biden for me?' Stupid," Biao admonished.

"So do you plan on being this bold at the White House next week?" Che asked.

All in all, Yang adds a much-needed fresh perspective to Saturday Night Live, and it's no surprise fans are responding positively to his hiring. Ultimately, Yang's Biao character proved he's definitely the new hire to watch as the season gets into full swing.

More like this
'The Undeclared War' Took Inspiration From This Gavin & Stacey Location
By Maxine Harrison
Julie Andrews Revealed A Surprising Behind-The-Scenes 'Bridgerton' Detail
By Grace Wehniainen
Who Is 'Umbrella Academy' Star Elliot Page Dating After His Divorce?
By Jake Viswanath
Kate Bush Reacts To “Mad” Revival Following 'Stranger Things' Cameo
By Sam Ramsden
Get Even More From Bustle — Sign Up For The Newsletter