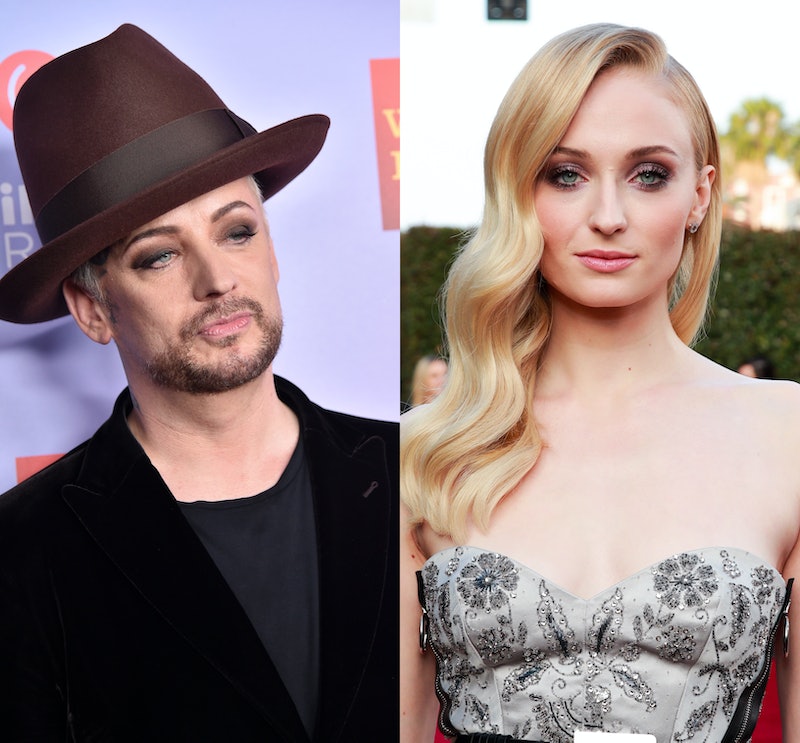 Could Sansa Stark trade in her crown for a microphone? During an appearance on Australian radio show Fitzy and Wippa, Boy George said he wants Sophie Turner to play him in his biopic — and she's so down. The Culture Club frontman told the radio hosts that while "there's been some really interesting suggestions" as to who should depict him in his upcoming biopic, and "one of the most interesting suggestions was Sophie Turner."

And, as for the generic qualms of the Game of Thrones alum, a woman, depicting the revered English musician, a man, Boy George simply offered the counterpoint, "When I was 17, I would have loved to have been her." Hey, a gender bent biopic never hurt anybody. Surely, there's still an abundance of current 17-year-olds (and grown adults, for that matter) who would love to be Sophie Turner.

Now, on the heels of Boy George's comments, Turner herself has taken to social media to weigh in on the casting request. On the morning of Tuesday, June 17, the Dark Phoenix actor wrote on Twitter, "I'm SO down," and tagged the musician. Let's make this happen, people.

As fans will recall, Deadline reported in May that a feature film based on the iconic Culture Club singer is in the works at MGM. The untitled project will explore the Grammy-winning artist's "humble beginnings in an Irish a working-class family, through his rise to the top of the international charts with the ’80s band Culture Club." The description continues, "The larger-than-life George never disguised who he was — a fearless, ruthlessly honest young man with an open identity who was years ahead of his time."

The untitled Boy George biopic follows a series of other well-received biographical musical films within the last year. In 2018, 20th Century Fox released Bohemian Rhapsody, which follows the journey of Queen frontman Freddie Mercury (depicted by Rami Malek). And just last month, Paramount released Rocketman, which follows the journey of Elton John (depicted by Taron Egerton). While a release date for the Boy George biopic has yet to be announced, the project will be written and directed by Sacha Gervasi, whose credits include 2008’s Anvil: The Story of Anvil, a rockumentary about Canadian rock band Anvil.

Jonathan Glickman, MGM’s Motion Picture Group President, said of the upcoming project with the filmmaker, per Deadline, "There is no filmmaker better suited than Sacha Gervasi to tell George’s confessional story with the irreverence and emotion it deserves. We couldn’t be more thrilled to be working with both of them to bring this remarkably honest and wildly entertaining tale to audiences around the world.”

So, could a role as Boy George be in Turner’s future? Well, the two do share an uncanny resemblance. Turner even acknowledged the similarities in a video for Wired, where she and Dark Phoenix co-star Jessica Chastain answered some of the web’s most-searched questions. One question posited, "Is Sophie Turner related to Boy George?" The two aren't related, but Turner replied, “I get Boy George all the time, and you know what? I met him and I met his brother, and they told me that I looked just like him." She added, “It’s definitely a compliment. He’s a beautiful man.”

OK, wow. Turner's resemblance to the musician can no longer be denied. Cast Turner as Boy George now, Hollywood.