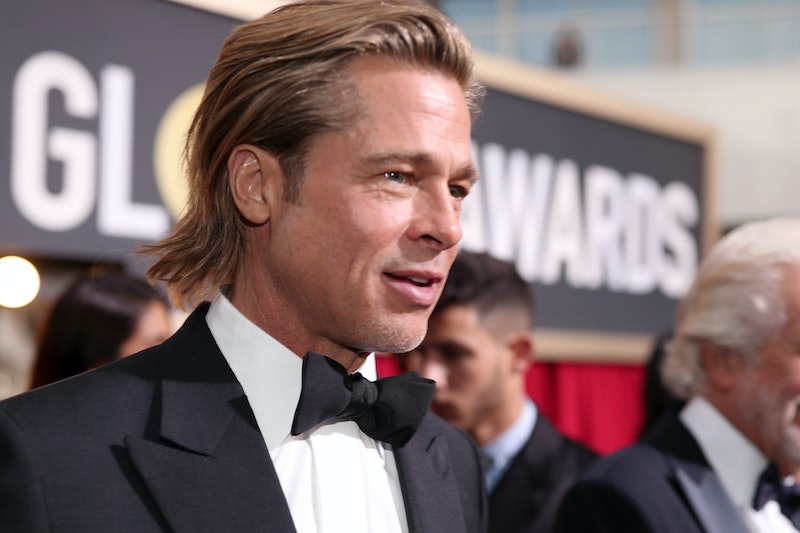 During a thoroughly charming speech while accepting the Golden Globe for Best Supporting Actor, Once Upon A Time In Hollywood star Brad Pitt made a reference to a movie that's nostalgic in an entirely different kind of way than the '60s-indebted film he stars in. While thanking his co-star Leonardo DiCaprio, Pitt referenced Titanic, just for kicks.

"He's an all star, he's a gent, and I wouldn't be here without you, man," Pitt said of his DiCaprio, to rousing applause. Then came the kicker: "Still, I would've shared the raft." Pitt was referring to that obscure movie DiCaprio starred in you might've heard of: 1997's Titanic. Famously, towards the film's end, DiCaprio's Jack clung to a door floating in the freezing ocean in the aftermath of the shipwreck, allowing Rose to survive by floating on top. Thus began over two decades of arguments by the film's fans over whether Jack actually had to die, and if there was really enough room for them both to share the raft. Even the Smithsonian institute shared arguments as to why Rose could've scootched over and Jack could have lived, only to encounter counterarguments about wood weights, water density, and temperature.

Pitt's bit of '90s nostalgia is even more appropriate given the movie he won for. Once Upon A Time In Hollywood stars DiCaprio as a nearly washed up actor in a changing era, and Pitt as his slightly mysterious and possibly murderous stunt double. Though in real life the two aren't anywhere near washed up, their careers blew up into superstardom over two decades ago, and since then they've aged from sex symbols into acclaimed actors (who are also still considered sexy).

Whatever the actual science of the scene, when it comes to emotional truths, Pitt's sly nod is an echo of his previous statement — he wouldn't have gone anywhere without trying to make space for Leo.

More like this
Selena Gomez Dismissed Trolls' Comments About Her Body After The Golden Globes
By Stephanie Topacio Long
Brendan Fraser's Emotional Critics Choice Awards Speech Is Total Tearjerker
By El Hunt
Jennifer Coolidge Hunted For Jewels & Lashes In J.Lo’s Hotel Room
By Jake Viswanath
Keke Palmer Shares The Sex Of Her & Darius Jackson's Baby
By Jake Viswanath
Get Even More From Bustle — Sign Up For The Newsletter
From hair trends to relationship advice, our daily newsletter has everything you need to sound like a person who’s on TikTok, even if you aren’t.