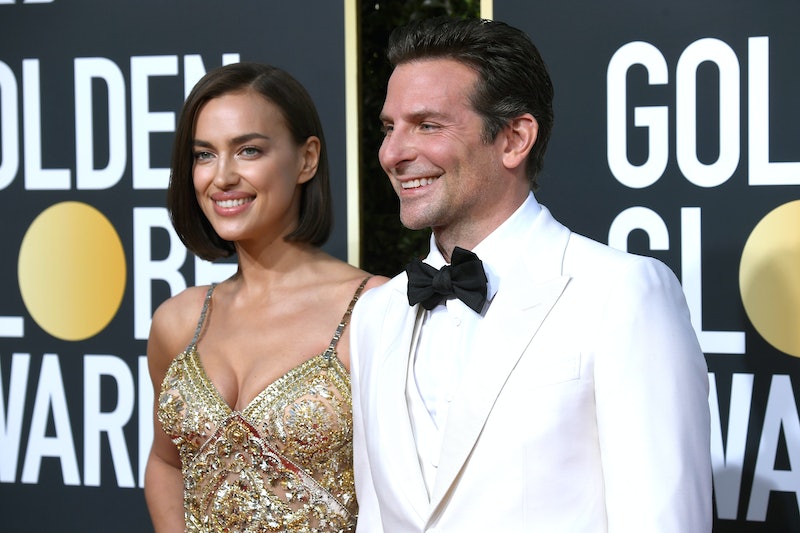 Bradley Cooper has a lot going on at this year's Oscars, from being nominated for three awards to performing onstage with his co-star Lady Gaga. And by his side during the whole thing will be his partner, Irina Shayk. They've been together for years now, but they're both pretty private about their relationship, so if you want to know more, Bradley Cooper and Irina Shayk's relationship timeline should help you out.

The actor and supermodel got together back in 2015. First they were spotted by paparazzi. Then they were really spotted by paparazzi while making out on a rocky beach, as you do. And the next thing you know, they were having a baby. Well, a few more things happened in between, but these two are just really quiet about their personal lives.

At Sunday's award show, Cooper is up for Best Picture, Best Actor, and Best Adapted Screenplay for A Star Is Born, (No Best Director nom, which was a bit of a surprise.), and the film is up for seven Oscars overall. In addition to that, he will be singing "Shallow" from the film alongside Gaga. Since Shayk has supported Cooper throughout this award season, it would be shocking if she didn't attend the Oscars. I mean, if only to hear "Shallow" live, right? This is a rare opportunity! Jackson Maine is retired!

Until then, let's take a look at Shayk and Cooper's history... or at least what we know of it.

The earliest reports of something happening between Cooper and Shayk came out in April 2015. At that time, Page Six reported that they attended Finding Neverland on Broadway together. A source told the publication that they knew each other through mutual friends and had been hanging out for about a week.

In August of 2015, Cooper and Shayk were photographed while visiting the Amalfi Coast. And, really, there's just a lot going on in these pictures. The Daily Mail described them as, "Bradley Cooper and bikini-clad Irina Shayk seem to recreate steamy beach scenes as they share scorching kiss in Italy." Sure!

March 2016 — They Make Their Official Debut

According to Extra, they made their official at-an-event debut on March 8, 2016 at the L’Oréal Paris Red Obsession during Paris Fashion Week. Previous to this event, Cooper had attended the Givenchy show in which Shayk modeled.

As reported by the Irish Independent, Shayk posted the first photo of herself and Cooper on her Instagram in April 2016. The thing is, you can't see their faces.

It was reported that Shayk was pregnant in November 2016. At the time Us Weekly reported that she "debuted" her baby bump while walking in the Victoria's Secret runway show.

People reported in April 2017, that according to the baby's birth certificate, Cooper and Shayk welcomed a daughter in March 2017. Her name is Lea de Seine Shayk Cooper.

May 2018 — They Attend The Met Gala Together

Bringing things full circle, they attended the Met Gala together in May 2018.

January 2019 — They Attend Their First Award Show Together

It wasn't until the Golden Globes that Cooper and Shayk attended an award show together and they even walked the red carpet.

It can be expected that they will hit the red carpet again on Sunday since the Oscars are a really big deal. But don't expect them to start sharing more information about their personal lives or start posting a bunch of Instagrams together, it's really just not their thing.