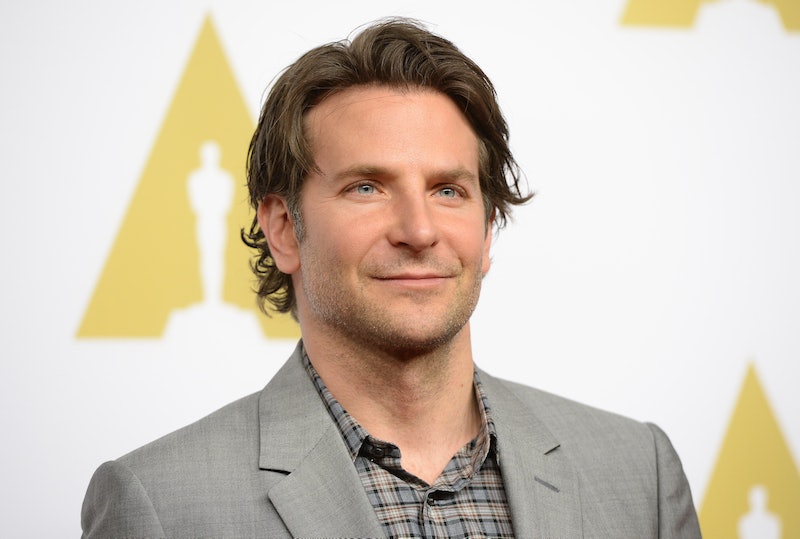 Things I recently learned about Bradley Cooper: He's 40, he's nominated for a Tony, for Elephant Man, and he supposedly has a super-hot new girlfriend named Irina Shayk, who he has been dating for all of, hmmm, about two months, but who he can't seem to keep his hands off of. What a pest! Shayk is a 29-year old Russian model, most notably for Sports Illustrated. Though they haven't made an "official" appearance together yet (it must be stressful dating when you're famous; you literally have to plan your debut appearance), there's a chance it could happen at the Tony Awards on Sunday, June 7. If they're dating, they've gotta support one another, right? So how exactly did Bradley Cooper and Irina Shayk meet? There are some unseemly rumors that say he MAY have picked her face out of a stack.

I'm not exaggerating, but let me press that this is just a rumor. According to OK! Magazine, Bradley Cooper's team brought him a stack of headshots of single women that were willing and able to date him, so he could get over his ex, Suki Waterhouse, who is also a model. Brad, if you're trying to be like Leonardo DiCaprio, just stop. There's only one Leo, and... it's Leo.

Anyway, ever since Cooper and Shayk were first spotted together in New York a few months ago after attending Finding Neverland together on Broadway, they have reportedly been all over each other. Hot people love to throw their mutual hotness in our faces.

Do we believe in their Millionaire Matchmaker-style meet-cute, though? It's possible there's a less seedy version of what went down. Maybe either Cooper or Shayk were interested in the other person and, obviously, they both have plenty of people around them to make a date happen, so they got things going that way. They haven't been together super long, though sources say that they have known each other for quite some time, and they are down to indulge in the puppy love. A source told E! News, "They have been spending as much time as they can together and getting very close... They are exclusive and a couple at this point. All their friends think this is a perfect match!" Maybe it was just a friendly set-up, after all. Or if not, perhaps they'll tell the truth about the headshot story on their wedding day...