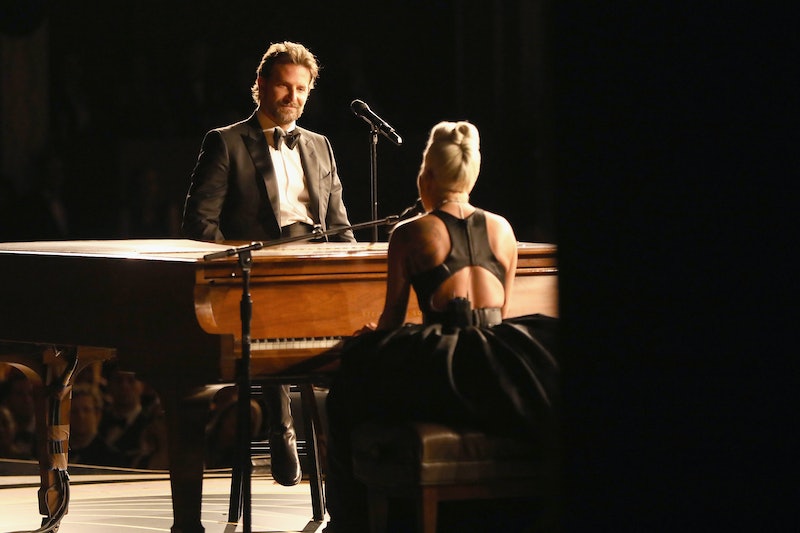 If you were enamored by Lady Gaga's and Bradley Cooper's performance of "Shallow" at the Oscars, you most definitely weren't alone. Many people obsessed over the duo's rendition of the song, which was filled with so much heart and feeling — and a lot of chemistry between its singers. It's no wonder "Shallow" won the Oscar for Best Original Song! But even though all of the internet loved it, Bradley Cooper's Oscars performance didn't go over as well in the actor's head, according to Mark Ronson.

While appearing on The Ellen DeGeneres Show on Feb. 26, the producer — who won the Oscar for making "Shallow" alongside Gaga, Anthony Rossomando and Andrew Wyatt — revealed a conversation he had with Cooper after the actor's Oscars performance. “Afterwards I went up to him and I was like, ‘You killed it!’ and he was like, ‘Really?'” recalled Ronson of his talk with Cooper, speaking to DeGeneres. “And I was like, ‘How can you not know?’ But I think that, yeah, he’s not a singer so it was so brave of him to go up and do that.”

Luckily, anyone watching the performance couldn't see the nerves or doubt in Cooper, as he pulled off the song so well — despite not being a professional singer.

The Oscars wasn't the first place that Gaga and Cooper performed "Shallow" live. In January, Cooper stopped by Gaga's Las Vegas residency and got on stage with her to perform their popular tune from A Star Is Born. It was actually pretty similar to their Oscars performance; after being coaxed into singing, Cooper came on-stage, sat on a stool, then stood up to listen to Gaga's verse. He then went to sit next to her at the piano as she finished out the song, stunning audiences. Compared to the performance at the Oscars, though, the Las Vegas rendition was way more relaxed and fun, with the duo seemingly losing themselves in the music and enjoying their time together.

When speaking to DeGeneres, Ronson gave some insight into how the now-iconic song was written. “It was probably a couple of days. [Gaga] had this idea for the chorus, she sat down at the piano and she just kind of picked a few chords and then she’s like, ‘I’m off the deep end’ or something and then we all hit the ground running. She’s super fast," said Ronson.

After nine Grammys, five albums, and years of success as a musician, it's no wonder that Gaga is a songwriting pro. And if you noticed that her vocal riff in "Shallow" felt like a throwback to her earlier days as an artist, Ronson said that he had a hand in inspiring that. “And then I think we got the ‘in the shallow’ part a little later,” he explained. “Because I love her songs like ‘Bad Romance’ and… the wild Gaga thing that she does. So I said, ‘We should do something a little weird.’ I know this is for this film and it’s a ballad, but do your weird Gaga thing.”

Fans of Gaga and A Star is Born are grateful Ronson helped inspire that moment and create the song. It's truly a showstopper, and despite Cooper's apparent nerves over the Oscar performance, he and Gaga still delivered one of the night's best moments.

More like this
Twitter Is At Odds Over Taylor Swift’s Possible ‘All Too Well’ Oscar Run
By Brad Witter
Taylor Swift Wanted To Be In 'Twilight: New Moon,' According To Its Director
By Grace Wehniainen
Madonna’s Reason For Directing Her Own Biopic Is So Madonna
By Maxine Harrison
Christina Perri Had No Idea Her 'Twilight' Song Is On YouTube's Top 100 Chart
By Radhika Menon
Get Even More From Bustle — Sign Up For The Newsletter