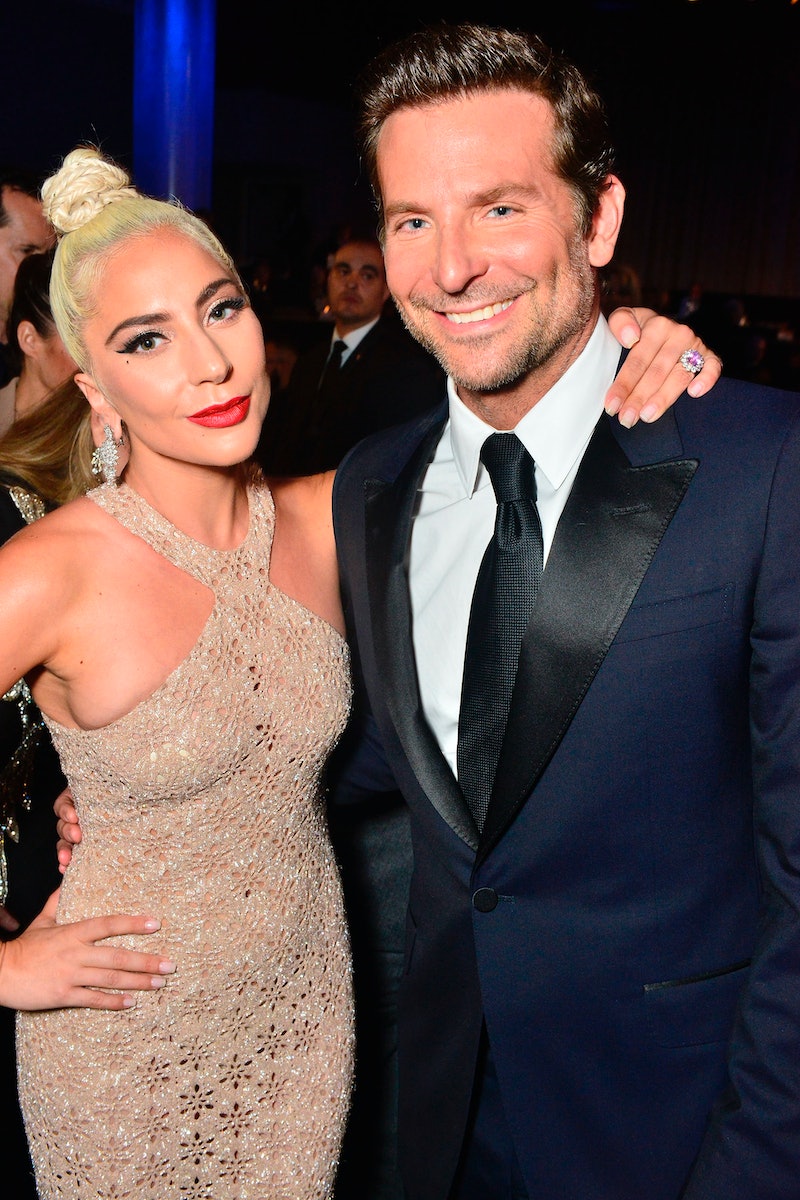 It's only a month into Lady Gaga's Las Vegas residency, and she's already shocking the crowd. On Saturday, Lady Gaga and Bradley Cooper surprised fans in Las Vegas with a "Shallow" duet, and the performance was just as powerful as the version in the duo's Oscar-nominated A Star Is Born. Cooper, who directed the film and was Gaga's co-star, joined the pop star on stage at the Las Vegas Park Theater for a special rendition of the track. According to Variety, the song is the closing number of the "Enigma" show, which opened in Las Vegas in December. The audience didn't know that Cooper would be brought out for the performance, though the actor was in the audience watching the concert.

When the opening of "Shallow" began to play, a few people in the crowd started chanting the actors name. Gaga teased the duet by announcing the star's presence at the show. "A really good friend of mine is here," Gaga said. "I don't know if you know him, but his name's Bradley, and he made that movie A Star Is Born." She went on to invite the actor to join her for the track. "Hey Bradley," she continued. "Do you wanna come up and do this song with me?" In a fan posted video on YouTube, you can see Cooper getting on stage and hugging Gaga, who's waiting with a microphone and headset. The crowd was clearly thrilled by the surprise, and cheered throughout the performance.

It's been a major week for "Shallow", which is the most noteworthy single from A Star Is Born. On Tuesday, "Shallow" received a "Best Song" nomination for the 2019 Academy Awards. Gaga wrote the song with musical collaborators Mark Ronson, Anthony Rossomando, and Andrew Wyatt, who are also nominated. "Shallow" already won Best Original Song at the 2019 Golden Globe Awards and at the 2019 Critic's Choice Awards. The song could be a favorite to win at the Oscars, though other strong song nominees include "All the Stars" from Black Panther, "I'll Fight" from the documentary RBG, and "The Place Where Lost Things Go" from Mary Poppins Returns.

The past year featured several major career milestones for Gaga. In addition to the "Shallow"honors, she also received a "Best Actress" nomonation for her role as Ally Maine in the film. According to Billboard, this makes Gaga only the second nominee ever to be nominated in the acting and song categories in the same year. The first was Mary J. Blige in 2018, who was nominated for her song and supporting role in Mudbound.

Gaga continues to perform and record music in addition to her new foray into acting, and in December, she began what will be a two-year long residency in Las Vegas. The set list for the show features old tracks such as "Poker Face" and "Telephone," but it also includes several songs from her Joanne period, as well as closing with the highlight from the Star Is Born soundtrack.

Cooper's impromptu duet with Gaga is likely just one of the many surprises the pop star will have for audiences during her residency over the next couple of years. The two stars clearly bonded during the filming of A Star Is Born and during awards season, and it was a special moment for the audience to see them reunite on stage.