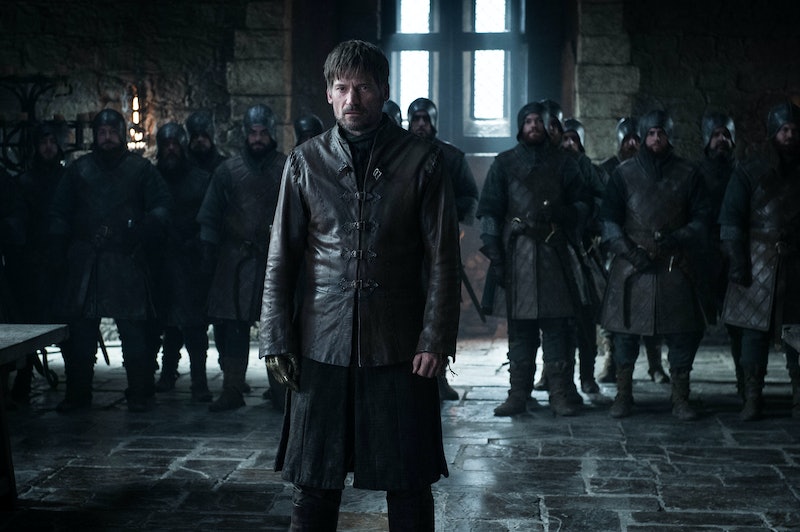 Eight long seasons after Jaime Lannister pushed Bran Stark out of a window, the two finally came face to face again on Sunday's Game of Thrones. And the reunion was just as satisfying as fans could have hoped for, as Bran and Jaime's reunion in Game Of Thrones Season 8 featured a brilliant callback to their first interaction in the show's pilot.

At the very end of the Season 8 premiere, Jaime (Nikolaj Coster-Waldau) arrived in Winterfell for the first time since the very first season, and found Bran (Isaac Hempstead-Wright) waiting for him in the courtyard. Luckily for fans, things kicked off immediately in "A Knight of the Seven Kingdoms" with Jaime standing before the Starks and Dany — the new Queen of the North — explaining why he decided to come up North in order to join the fight against the White Walkers.

After Jaime defended his decision to kill the Mad King and fight for his sister and family to obtain power, Bran underlined the Lannister's commitment to doing anything for the sake of their family with a perfectly-timed callback to the pilot. "The things we do for love," Bran said, echoing what Jaime said just before pushing him out of a tower window in the pilot. And based on the look of shock on Jaime's face when Bran spoke up, it's clear that he knew exactly what the Three-Eyed Raven was referring to — and might regret going to such extreme measures in order to protect his relationship with Cersei.

It wasn't just Jaime who was shocked by Bran's perfectly-timed comeback, as social media lit up with appreciation for the younger Stark's mic drop moment:

While fans have been waiting with anticipation to see Bran and Jaime face off once again, the former Kingslayer confirmed that Bran has never told anyone in his family the truth about how he ended up paralyzed. A few scenes later, Jaime offered an apology to Bran for paralyzing him, noting that he could have told the Starks and Dany that Jaime pushed him from the tower. "You won't be helpful to us if they kill you first," Bran fired back, teasing that Jaime might play a major role in the North's fight against the Night King.

While it doesn't seem as if Bran is planning to forgive Jaime for paralyzing him, it's clear that he's come to terms with the fact that catching Jaime and Cersei in bed together in the pilot changed his life forever. After all, without the incident in the pilot, Bran would never have discovered the need to develop his skills as a greenseer and become the Three-Eyed Raven.

In addition, if the theory that Bran can speak with the Mad King — and accidentally made him go insane in the first place with his whispered warnings about the White Walkers — is true, it ties Bran and Jaime together in yet another way. Jaime became famous in Westeros for killing the Mad King before the season started, clearing the way for Robert Baratheon to take the Iron Throne. If Bran is the one who made the Mad King go mad in the first place, it means that he and Jaime started the war for the Iron Throne and their fight against the Night King will bring them full circle.